Two for One: BLOODY BIRTHDAY & HAPPY BIRTHDAY TO ME 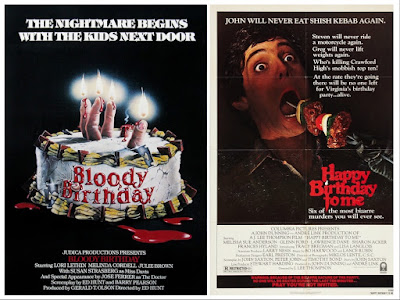 “It's really weird. Because there was an eclipse the day she was born, both the sun and the moon were blocking Saturn. There should be something missing from her personality.” – Joyce Russel

I'll be celebrating my 39th birthday on April 20th, and with that comes the end of “Two for One” and the beginning of a new column I'm calling “52/82,” wherein I'll be covering 52 movies from 1982 to commemorate the last year of my 30s. I think it's important for us to celebrate birthdays. Not just for kids, but adults too. I've survived 39 years! You've survived (fill in the blank) years! If you're reading this, you've survived a global pandemic! Celebrate with me! And there's no better way to celebrate by cozying up for a double feature of two birthday horrors. 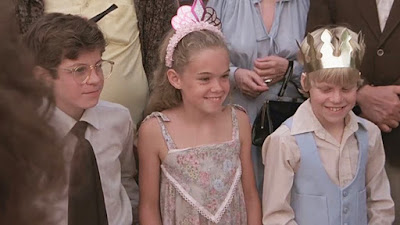 First up is Bloody Birthday from director Ed Hunt and starring three of the creepiest little shits to ever grace the screen. These three psychos were born on the same day during a total solar eclipse, and during the week before their 10th birthdays we witness how psychotic they really are. Debbie, Curtis, and Steven – three friends that share that special bond and appear to be sweet, helpful children on the outside. But we see the first inclinations of criminality when Debbie invites Curtis, Steven, and their “friend” Timmy over to her house, where she charges each boy a quarter to look through the hole in her closet at her older sister undressing. Before all that, though, a brutal murder in the park opens the film, and in the very next scene Debbie's father, the sheriff, is in this fourth grade class lecturing children about murder. I don't know about you but I didn't even experience D.A.R.E. until fifth grade, let alone having a cop come to school at any time to lecture us about murder. It seems a little extreme. That is until Timmy's sister, Joyce straight up accuses the creepy kids of murder. There's no pussyfooting around the fact that these children are our killers. Writer/Director Ed Hunt is up front with us that these kids are absolute monsters.

While Bloody Birthday is shockingly violent, and the fact that Debbie, Curtis, and Steven are spawns of Satan, I wasn't phased because I know how cruel children can be. Have you ever given a speech to a group of kids, or sang a song, or told jokes, and you get nothing but silence and blank stares in return? I have and it made me want to die. And I was a grown ass adult. So when Debbie and her boy-toys from hell beat her father to death with a baseball bat, I thought to myself, Of COURSE they did.

Birthday celebrations continue with Happy Birthday to Me from director J. Lee Thompson, whose career trajectory I adore. Probably best known for directing Gregory Peck in The Guns of Navarone and Cape Fear in the early 1960s, Thompson had a very respectable run of “traditional” pictures all the way through Battle for the Planet of the Apes in 1973. Then he met Charles Bronson and teamed up for some of the greatest exploitation movies of the 1980s like 10 to Midnight, The Evil That Men Do, Murphy's Law, and the ultra-sleazy Kinjite: Forbidden Subjects. But shortly after his collaborations with Bronson began in the late 70s, bringing us back to our double feature, Thompson directed the slasher Happy Birthday to Me. 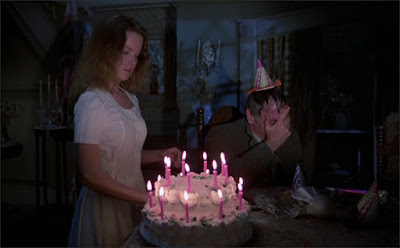 HBTM follows a group of snobby private school friends who refer to themselves as the “Top Ten.” Virginia (Melissa Sue Anderson) has returned to school after an accident where she had to undergo brain surgery. As her 18th birthday approaches, Virginia's friends start disappearing one-by-one until there's no one left to attend her party. The story plays out like an American giallo picture, black-gloved killer and all, where we're constantly fed red herrings and led to believe to Virginia could be the killer. As is usually the case, and rightfully so, every single man that has a speaking role in this movie comes across as a suspect until they start dying gruesome deaths such as the one the poster suggests: a kabob jammed through the back of one's throat. Now, granted, this particular gentleman deserved this bloody outcome because just before his demise he pulls a giant hunk of meat off the skewer, and mid-gnaw says, “Don't you like hot things?”

Bloody Birthday is clearly a Halloween rip-off, all the way down to tracking shots of high school girls walking through a quiet neighborhood, but does goes its own way by including three minions from Hell. HBTM is prime J. Lee Thompson sleaze and feels innately Canadian because it was shot in Canada and primarily features Canadian actors (a la My Bloody Valentine). You may get these movies confused, and why shouldn't you? All these 20- something white girls looked the same to me and I couldn't keep them straight. But you'll be watching this double in honor of my birthday. So happy birthday to me!
Posted by Patrick Bromley at 5:00 AM

Email ThisBlogThis!Share to TwitterShare to FacebookShare to Pinterest
Labels: bloody birthday, double features, happy birthday to me, j. lee thompson, two for one