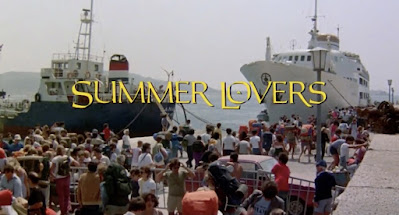 I'll venture a guess and say that Summer Lovers will be the sexiest movie I'll see all year. Possibly all decade. From the stunningly gorgeous setting of Santorini to the stunningly gorgeous cast of Peter Gallagher, Darryl Hannah, and Valérie Quennessen, we're immersed in pure sex and all you want to do is strip naked and lay by the ocean. If that was writer/director Randal Kleiser's goal, then he succeeded. If not, then it was a fascinating and welcoming side effect of this tale of young love.

When I think of the comforting warmth of romantic comedies featuring younger actors of the 1980s, I always think about Valley Girl, Risky Business, St. Elmo's Fire, Little Darlings, or the slew of John Hughes high school movies. Somehow these all seem to fit nicely into their own little genre box. Summer Lovers, while featuring twenty-somethings on a dream summer vacation in the Greek Isles, stands alone. For one it seems to be dealing in more adult themes than even the elder Brat Pack who are just out of college and hanging out at St. Elmo's Bar. When it comes down to it, Summer Lovers is about two young Americans who travel over seas and explore their sexuality, however reluctantly. And that's it. The initial log line on ImdB says, “A young American couple and a French woman engage in a threesome in the Greek Islands.” Yes, true. Yet there's so much more. 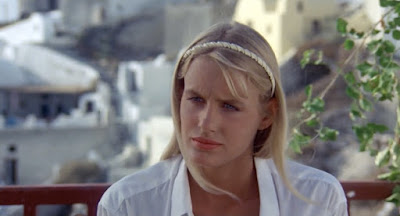 Gallagher and Hannah are Michael and Cathy, the couple who have planned a summer in Santorini where she plans to photograph the beautiful villas, beaches, and landscapes, and he wants to open her up to new possibilities in the bedroom and swim naked. (Just to be clear, I'm not choosing sides here; they both make wonderful points.) Within a week, both have settled in and have set out to do what they came to do. “We've been here a week and you're skinny dipping,” Michael says to Cathy. “You'd never do that at home!” And Cathy has set up a darkroom in the bathroom where, after walking around the village and photographing the locals and beautiful architecture, she comes back to develop her film. “You can't shower today!”

Let me stop here and say that Summer Lovers, while not your typical American movie of the '80s, is still impossibly '80s. The soundtrack, for one, is absolute killing. The film opens with its own self-titled theme song co-written and performed by Michael Sembello (“Maniac” from Flashdance). The soundtrack also features songs by Elton John, Depeche Mode, Tina Turner, Prince, Mink Deville and Heaven 17. There's a lip-sync/music video-esque sequence of our three leads singing Lime's “Your Love.” Not to get too far ahead of myself, but the movie closes with a medley of the Peter Cetera version of Chicago (ultimate '80s for me) doing “Hard to Say I'm Sorry” and “Get Away”. If that's not '80s enough, Michael and Cathy sleep on a water bed. 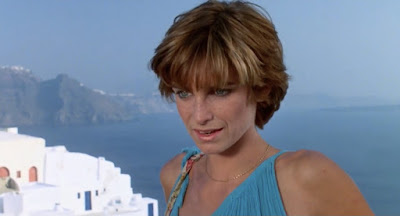 After Michael and Cathy become acclimated to their new summer home, Michael's mind seems to wander, and one day while sitting on their patio with his binoculars, he spots Lina (Quennessen), an archeologist who is summering across the way while she's on a dig. Michael slips into creepy mode and low-key stalks her until he finally works up the nerve to offer her a ride. After seducing Lina and using the obligatory “We have an open relationship” line, they sleep together. Almost immediately Michael confesses his infidelity to Cathy, but not in any sort of malicious manner. Cathy confronts Lina, again non-maliciously, and Lina tells her, “Jealousy doesn't show how much you love someone. It shows how insecure you are.” While I believe that to be true, it also seems like something a man would write for a woman to say in order to excuse his infidelity; this coming from the man who directed Blue Lagoon two years prior. But this being a movie, Cathy moves on and begins to explore her sexuality until her, Michael, and Lina become a couple... a threesome? We're aware a sexual encounter is approaching between the three when they pass a single glass of wine between them while candles flicker in the background. And after their first night together, The Pointer Sisters' “I'm So Excited” plays over a typical '80s montage of our newly menage'd friends. 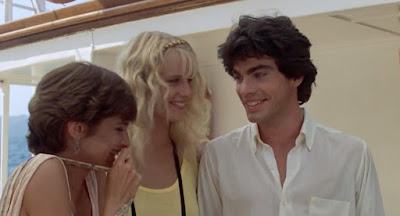 The movie then plays out in standard '80s romantic-dramedy fashion with the exception being we're dealing with three people instead of two. They celebrate birthdays (in a particularly funny scene with Gallagher and Hannah in oversized cowboy hats), go to movies (Gallagher watching The Three Stooges with a woman on each arm), go dancing (with an awkward lip sync sequence set to Lime's “Your Love,” and parents unexpectedly show up. They spend their days either naked on the beach or digging up fossils, and their nights drinking and naked. Boobs. Are. Everywhere. Obviously we're dealing with insufferable rich kids who have all the time and money in the world at their disposal. That still doesn't take away the fact, though, that this would be a dream summer lounging around the Greek Islands with not a care in the world.

Valérie Quennessen would tragically die in a car accident in 1989 at the age of 31. I'm heartbroken to think of a life with so much promise and talent cut so short. Along with Quennessen, Summer Lovers features tremendous early performances from Gallagher (his second feature) and Hannah (her third). While dripping with schmaltz, it's far too under- appreciated and underseen. And for me, this is the perfect kickoff for the summer season.
Posted by Patrick Bromley at 5:00 AM