The Most Complete Adkinsploitation Primer in the World

If you’ve ever listened to my podcast Adkins Undisputed, you know there’s two things I love in this world: F This Movie! and Scott Adkins. And on this most holy of FTM months, Junesploitation, Patrick was kind enough to dedicate an entire day to the man I call the human special effect.
I however am never satisfied, so I wanted to go further. I wanted to let you know how you could mix these two worlds for maximum enjoyment all month long. I can’t do an Adkins movie for every day (sadly he never got to star in a Fulci movie, and was a child in the '80s), but I can hook you up with one for most days. On some days I’ve selected films adjacent to his career, and admittedly I had to stretch the definitions of the days a bit, but that’s the fun of Junesploitation! So let’s dig into some Adkinsploitation

1. ‘80s Action! The Expendables 2 - While Adkins was only a child in the '80s, you can watch the next best thing: Sylvester Stallone’s throwback to '80s action excess. Adkins only appears in Part 2, which is fortunate as it is by far the best of the series, and also stars a gloriously over-the-top Jean-Claude Van Damme.

2. Slashers! Stag Night - A group of friends out celebrating a bachelor party find themselves stalked through the subway by a gang of ruthless cannibals. While the film is edited to death, it has all the ooey goodness you could want on Slasher day, and Adkins in particular gets well acquainted with all the fake blood.

4. Westerns! El Gringo - A modern western is still a western. Adkins plays “The Man” who wanders into a small Mexican town with a bag of cash and a real need for a glass of water. The editing does this one in but there’s a lot of fun to be found, and Adkins riffing on The Man with No Name makes it worth a watch. 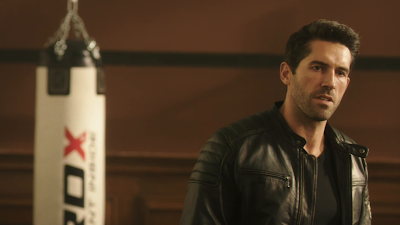 5. Revenge! Accident Man - Mike Fallon is the best assassin in the world, famous for making his kills look like accidents. When his ex-girlfriend turns up murdered Fallon sets out for revenge and finds himself fighting off his co-workers, all top assassins. Accident Man sees Adkins really steer into comedy while still providing top notch fights. It also stars the incomparable Amy Johnston, one of the best up and coming action stars in the world.

6. Free Space! Special Forces - A foundational movie in Adkins’ career, Special Forces is the movie that gives us the first taste of the career to come. With fight choreography by Drive’s Alpha Stunts, Adkins appears halfway through the movie and steals the entire thing.

7. Sword and Sorcery! The Legend of Hercules - The biggest problem with Legend of Hercules is that Adkins is the villain and not the titular hero. If you can get past that, there’s fun to be had in this Renny Harlin-directed film.

10. Scott Adkins! Undisputed 3: Redemption - No Adkinsploitation list would be complete without this, one of the greatest martial arts films of the last 20 years. Adkins returns to his most famous character, only this time Boyka is the hero, squaring off against Marko Zaror’s villain. Director Isaac Florentine and choreographer Larnell Stovall push all of the actors to their physical limits and the results are astonishing. This is the movie where Adkins truly is the human special effect. 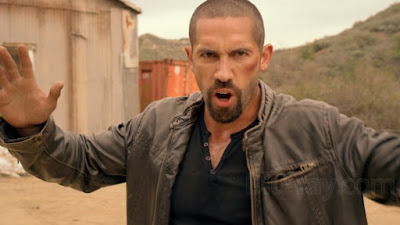 11.Vigilantes! Close Range - Reteaming with Florentine, Adkins plays Colt Macready (great name) a soldier of fortune returning home to rescue his niece from a drug cartel and along the way cleans up a corrupt sheriff. Oh and he kicks a truck.

12. Sci Fi! The Intergalactic Adventures of Max Cloud - Adkins plays Max Cloud, the galaxy’s greatest hero, who also happens to be the main character in a video game. When a teenage girl is transported into the game, her best friend must help her win and help Max be the hero everyone needs him to be. The film doesn’t work on every front, but Adkins tears up the scenery with an over the top performance that really highlights his comedic skills

14. Kung Fu! Ip Man 4: The Finale - Adkins is a martial artist, so obviously most of his movies could fit, but this final entry in Donnie Yen’s homage to the great kung fu master fits best, as the crux is Yen’s Wing Chun versus Adkins’ racist soldier’s adherence to karate. Kung fu cinema has a long history of “my style is better than yours” and while this is glossier than some of those classics, it feels right at home with them.

15. Sequels! Hard Target 2 - Adkins has a ton of sequels to choose from, but most are represented in other slots on this list. So this seems like a good day to watch Roel Reine’s DTV sequel to John Woo’s masterpiece. It can’t hold a candle to the original, but the action is impressive given the budget, and isn’t that what exploitation action is all about?

16. Cannon! Revenge of the Ninja - One of two recommendations that don’t actually star Adkins. Instead you get Sho Kosugi in the role that defined him, as a ninja trying to live his best life in humble Salt Lake City when he’s dragged back into the world after his family is threatened. It also co-stars Sho’s son, Kane, as a ferocious child fighter who will make an appearance later.

18. Free Space! Ninja 2: Shadow of a Tear - You can skip Ninja 1. You don’t get a better homage to Cannon films than this, a throwback to the ninja epics of the '80s. Adkins is on a quest for revenge after his wife is murdered, and to survive he must return to his ninja ways. Ninja 2 rivals Undisputed 3 for state of the art martial arts scenes, and it co-stars a grown up Kane Kosugi, tying it all together.

19. Jackie Chan! The Accidental Spy - Adkins actually appeared in two Chan films, Spy and The Medallion, and while he has a featured henchman role in Medallion, Spy is the better of the two films, particularly for Chan’s fight in a market while naked. It’s a classic Chan action scene and one of his best, even if the movie isn’t. 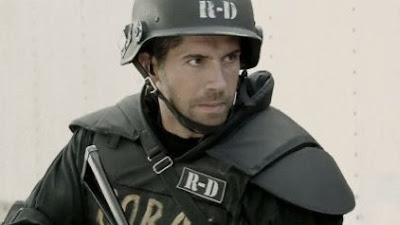 22. Zombies! Re-Kill - After the zombie outbreak, the world is trying to move on the only way it knows how: by watching reality television. A documentary crew for a COPS-like series follows a team of soldiers who’s job it is to put down, or re-kill, zombies. The movie is made most entertaining by its mock ads that occur during the commercial breaks.

23. ‘90s Action! Universal Soldier - The second recommendation that doesn’t actually star Adkins, but keep reading and you’ll see why. Van Damme and Lundgren play reanimated supersoldiers battling one another when their supposedly lost memories are recovered. Solid Roland Emmerich action and great lead performances make this one a fun time. And, most importantly, it lays the groundwork for what’s to come.

24. Free Space! Universal Soldier: Regeneration - Again, a recommendation that doesn’t actually star Adkins, but John Hyams' sequel takes the franchise in an unexpected direction and features terrific performances from Van Damme and Lundgren, as well as absolutely brutal fights. It also sets up our last Free Space day below.

25. Cars! The Debt Collector - While The Debt Collector isn’t a traditional CARS movie, most of the film takes place in a car, as Louis Mandylor’s Sue teaches Adkins French the ways of collecting debts for their boss. It involves lots of driving and lots of punching. Adkins and Mandylor’s chemistry makes this one an easy watch.

28. Free Space! Universal Soldier: Day of Reckoning - Arguably Adkins' masterpiece. John Hyams takes the Universal Soldier franchise in a direction that would make David Lynch proud, while still providing some of the best action scenes ever committed to film. Van Damme and Lundgren are back, but this time they are bolstered by the addition of Adkins and fight choreographer Larnell Stovall. We watched this for Patrick’s birthday in 2020 but if you haven’t seen it, seek it out. If you only watch one Adkins movie this month, make it this one. 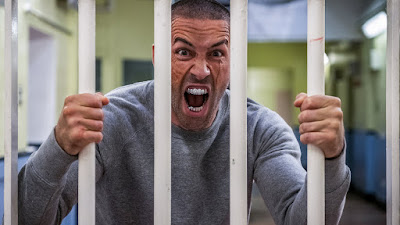 29. Gangsters! Avengement - Jesse V. Johnson’s Avengement fits several different days, but it felt right to put it here. Adkins’ Cane gets sent to prison for doing a favor for his brother. Once there, he is beaten, blooded, and fitted with a sweet set of silver teeth that hardens him and prepares him for revenge once he escapes. Nasty, violent and amazing, it’s arguably Adkins' best performance and one of his standout films.

30. Vampires! Abduction - Not all vampires drain blood. Some drain Qi. Adkins' SWAT team member has to team with Andy On’s gangster to discover who has been responsible for kidnapping their loved ones. Spoiler: it’s vampires. Alien, Qi sucking vampires.

Nobody should in good conscience undertake this list, but hopefully it’s given you some good ideas whether you are a veteran Adkins fan or a first timer! Enjoy Junesploitation everybody!
Posted by Patrick Bromley at 12:00 PM