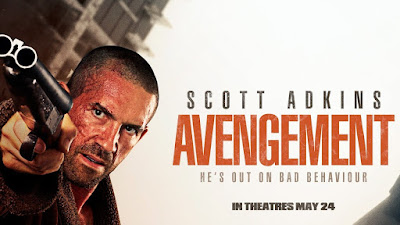 It's Scott Adkins' most brutal movie yet.

Regular readers of Heavy Action already know that Scott Adkins is my favorite action star currently working, on a very short list of actors whose every movie I will see simply because he is in it. I haven't loved every one of his movies, but I almost always love him in them. In the DTV realm, there is no one I would rather watch beat ass. This works in the favor of his latest effort, Avengement, because he beats a lot of ass. Like, a lot.

Re-teaming with frequent collaborator Jesse V. Johnson (Savage Dog, Accident Man, this year's Triple Threat), Adkins plays the excellently-named Cain Burgess, recently out of prison after being away for several years on a manslaughter charge. Being locked away changed Cain, turning him from a mostly mild-mannered, law-abiding citizen into a machine of violence, existing only to inflict as much damage as he possibly can on anyone who wrongs him or gets in his way. On the outside, Cain goes looking for a measure of revenge -- or, in the parlance of this movie's title, "avengement" -- against his brother Lincoln (Craig Fairbrass) and the men he holds responsible for taking his life away. 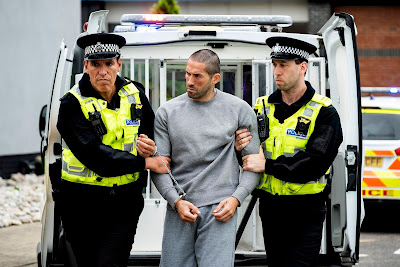 One of the many things I love about Scott Adkins as an actor is his willingness to give very different performances in each movie. Traditionally, action stars are known for sameness -- we go see every new Chuck Norris or Steven Seagal or Charles Bronson because we want to see them doing the thing for which we know and love them. Adkins, on the other hand, regularly changes it up and gives real performances rather than just trading in on iconography. He always delivers the goods, but finds different ways of doing it each time out. That's certainly true of Avengement, his scrappiest and most savage movie to date. He actively actively strips away most of his movie star qualities -- his English charm, his handsome good looks -- in place of a lot of limey attitude, a shaved head, a scarred and disfigured face, and metal dentures. He's violence personified, the human equivalent of bloodied knuckles, and Adkins is more angry and intense than he's ever been on screen.

This all translates to the action scenes, too. Whereas Adkins made a name for himself as a martial arts star, Avengement isn't interested in that kind of grace and fluidity. Director Jesse V. Johnson and fight coordinator Dan Styles instead take a two-fisted approach, all punches and head butts and people being hit with blunt objects in the interest of inflicting as much damage with as much force as possible. This is a hard-hitting movie, the kind where the violence is stylized less so that it looks cool and more so that you feel every blow. I got bruises just watching it. 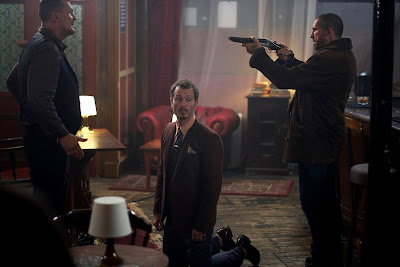 The narrative of Avengement is more or less incidental. The film is told mostly in flashbacks and combines the standard revenge movie plot with the tropes of the prison film. I'm fine with all of it, because what this movie is really about is violence -- a man transformed into a fist who destroys his soul in the process. The action drives the story and the themes in a way that's totally effective, and Johnson (who also co-wrote the screenplay with Stu Small) deserves credit for the movie's total focus and its insistence on being exactly what it is. My favorite action star has transformed himself into a beast, and he's brought Avengement right along with him.

Avengement is in limited release and on VOD beginning today.


Got a movie you'd like to see covered in a future installment of Heavy Action? Let us know in the comments below!
Posted by Patrick Bromley at 5:00 AM