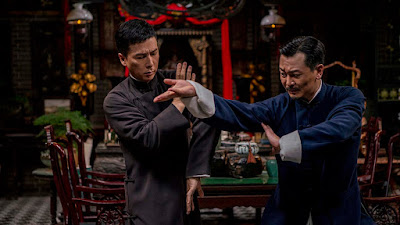 Goodbye to a legendary series.

One of the most intriguing and undersold arcs of an heroic character is what happens after the pinnacle victory. How long can the hero stay on top of the mountain, or, how quickly does that same hero come crashing down from the heights? The legend of Ip Man doesn’t come crashing down, but the news is less good for the series responsible for his story.

The Plot in 52 characters (in honor of the $52 million budget, largest in the series)

Ip Man in the USA! He finds racism, not opportunity.

Scott Adkins - The movie comes alive whenever action all-star (and Patrick Bromley’s personal bodyguard) Adkins is on the screen. He plays Marine sergeant Barton Geddes (great action name), the leader at the local Marine barracks near San Francisco, who rejects the idea that Ip’s Chinese Wing Chun could possibly be better than the US Marines or the Marines’ favored martial art, Japanese karate. It’s as if one level of xenophobia is not enough, like a villain who requires multiple moustaches to twirl. Sgt. Geddes humiliates an ethnically Chinese Marine soldier under his command and then goes on to defeat the kung-fu master before Ip Man, once again, has to defend the honor of Chinese martial arts by taking on Geddes in the climactic showdown. Although Yen is now in his mid-50s, his skill is intact, and Adkins’ physicality and athleticism sells the action beautifully. He’s probably the best non-Asian fighter in the series; he’s a marked improvement from the relative woodeness of Darren Shahlavi as the English boxer in Ip Man 2 or Mike Tyson in Ip Man 3. 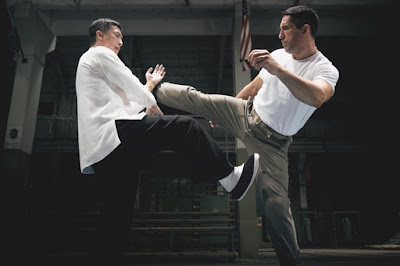 Donnie Yen - Sort of an obvious choice, but any time we get to see one of the all-time, Mount Rushmore guys of cinematic martial arts, it’s a gift. He’s been saying for a few years that his past few movies would be his final full fledged martial arts role, but has apparently confirmed that Ip Man 4 will be the final, final one.

Does this make sense?

Redundant/repeated arcs - This film returns back to the ages-old conflict between rival cultures in the martial arts, and though many films tap into this, it feels especially worn and threadbare here. The main conflict between the Marines and the Chinese community is not racism between them, but the Marines’ preference for the Japanese martial art of karate, instead of the Chinese art of kung fu. It’s a strange, indirect kind of racism; why not make the conflict more straightforward? Also, the storyline of the white foreign oppressor has already been explored in this series (in Ip Man 2), and although I love Scott Adkins in this movie, why are we back here again?

Legacy concerns - This 4th installment doesn’t ruin the series; at worst it feels like an unnecessary installment, for a few reasons. (Some small spoilers for the Ip Man series in general). 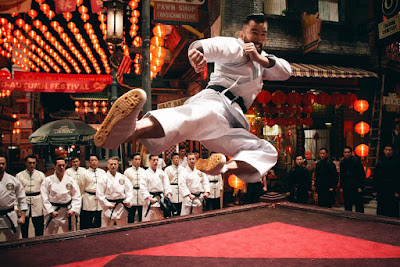 • The third movie was already a fitting end - Going back to revisit Ip Man 3, how much that movie acts as a proper coda for the whole series was way more apparent. While still providing plenty of action, that movie takes a pleasant turn away from the fisticuffs to fulfill some of the emotional arcs in the story, particularly with Ip’s family and dealing with his own mortality. The attempt to pick up those already tied-up threads in Ip Man 4 end up with mixed results; the filmmakers try to go back to fleshing out more of Ip’s family story, but that doesn’t add enough momentum to give the movie an emotional lift that the previous installment had.

• Franchise staleness - I wrote awhile ago about the stagnation of the Bourne series, and the same signs are here: the reducing/simplifying of the main character into mere actions and a blankness punctuated by a lack of true humanity. Ip is reduced to being the trump card produced by the downtrodden to right their wrongs. There’s a noble quality to being that Robin Hood persona, of course, and Ip has been that throughout the series, but it’s not as powerful when the character does it because the plot sort of needs him to do so, as it happens here.

I would argue that what has made this series memorable is that Ip Man is a great martial artist with an even better moral compass. He’s not the typical anti-hero who reluctantly fights because of indecision or lack of will; he is reluctant to fight because he loves the art, not the thrill of victory or domination. We’re left with the impression that Master Ip would love to do nothing more than open a school and peacefully teach the art of wing chun for the rest of his life. But, for the sake of the series, it feels like he can’t be allowed to do that. 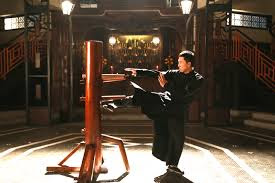 But, at the end of this quadrilogy, it feels more appropriate to celebrate triumphs instead of focusing on drawbacks. Although well-known in the martial arts world and playing the heavy in movies headlined by Jackie Chan and Jet Li, Donnie Yen wasn’t an international name of his own until Ip Man in 2008. The series itself didn’t gain international traction until Ip Man 3, at which point Yen’s fame had led to appearances in Rogue One and the upcoming live-action Mulan. Creating a series based on a real (or fictional) grandmaster has always been a staple of the martial arts genre; check out all of the movies based on Wong Fei Hung and Huo Yuanjia. But with Ip Man, Yen and his collaborators created arguably the best continuous martial arts series in cinematic history. Despite my hesitation about this final installment, the series as a whole still holds together as a complete arc that explores the entire character, not devolving into mere set pieces or an excuse to play out hypotheticals of Ip Man vs. someone else. We get to remember Ip Man not simply as a footnote in someone else’s story, notably as Bruce Lee’s instructor, but as his own person. It feels a little silly to say in a genre that’s often lighter on character development, but it was a pleasure get to know Ip Man over the length of four feature films, as the slightly simple-minded but kind kung fu master who enjoyed his family and defending the less fortunate.
Posted by Patrick Bromley at 5:00 AM