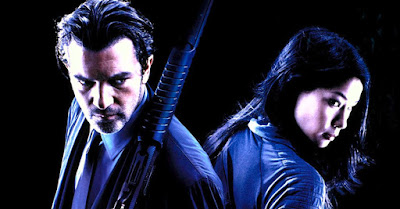 The review duo who can’t recommend the movie no one has recommended.

Adam: This week, our Bomb Squad series continues as we discuss 2002’s Ballistic: Ecks Vs. Sever, directed by Kaos and starring Antonio Banderas and Lucy Liu as the titular people with weapons. Aside from performing well below its budget at the box office, Ballistic: Ecks Vs. Sever’s claim to fame is that it has a 0% rating on Rotten Tomatoes from the most reviews compared to all other films that also have 0% on the site. This was my first viewing of the movie, which I remember having a little interest in seeing when it was released nearly 20 years ago theatrically. Having now seen it, I can say it really stinks. My biggest complaint about the film is the somnambulant tone of it all, which is ironic coming from a filmmaker with the moniker “Kaos.” Banderas has been a highlight in many movies but here he’s so resigned that I barely remember him speaking any words during the entire movie. Same goes for Lucy Liu, whose job here is to resemble an action figure with negligible thought or emotion. Rob, you and I had the rare treat of seeing this one together and between the F This Movie Fest hangover, Daylight Savings Time, and general post-breakfast sluggishness, I can barely remember any of this movie. It felt like a dream. Did Lucy Liu have dialogue? Was this a silent movie?

Rob: She definitely spent some time glowering, if I remember correctly. Like you, I had a hard time following and/or caring about this one, though, and it wasn’t just the fact that we were half-conscious and bleary-eyed from the weekend’s adventures. It was because Ecks vs. Sever is a dull and lazy attempt at Matrix-sploitation that fails to inspire anything interesting between explosions and head whips. It sucks. The most exciting thing about it was watching your mailbox swing open when we retrieved the DVD.

Adam: I’m ready to renew my lease indefinitely because of how exciting the new mailboxes are. I just noticed I neglected to mention the plot. Here’s what I can gather. Ecks (Banderas) is a government agent of some sort who is trying to find his wife (Talisa Soto), who he thinks is kidnapped or was killed (I can’t remember) by the big baddie (Gregg Henry). Sever (Liu) is an assassin or something and she kidnaps Henry and Soto’s kid as revenge for Henry killing Liu’s family before the movie started. Ecks eventually is trying to hunt down Sever because he finds out the kid Sever kidnapped is his son and not Gregg Henry’s. Ray Park is also in this as the #2 bad guy. The best part of this whole experience was that it led to us deciding that Ray Park remains the ambassador of all things Ballistic: Ecks Vs. Sever in 2020, including pitches to Bob Iger for a sequel, “BEVS” cons and a spin-off XM Turbo rock band called “Severdust.”

Rob, what was this movie?

Rob: Considering the fact that you spent a lot of it trying to perform a patented Riske #walkout from your own home (No kidding, folks — He was roaming around the kitchen, laying on the floor, and doing everything he could to get away from his TV), I’m extraordinary impressed that you were able to manage that synopsis of Ecks vs. Sever. Better than I could do. Anyway, I think the film is a fairly well-meaning bit of follow-the-leader that tried to translate the Wachowskis' idiosyncratic Matrix into a more digestible (and far less philosophical) Happy Meal. It copies the recognizable details (black coats, sunglasses, Guns, Lots of Guns, etc.) and delivers them without understanding — or possibly without caring — what makes them interesting. It’s not alone, obviously, nor are any of those unforgivable sins, but the result is just a deeply boring viewing experience. 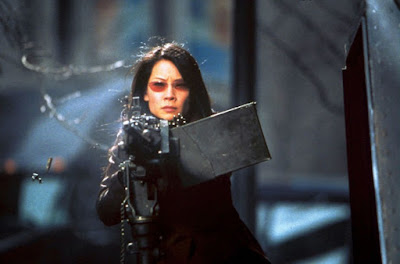 But here’s the thing: Does it really deserve a 0% Rotten Tomatoes score? What does? I mean, neither of the films we’ve watched for this series so far is incompetently made. Both feature then-bankable stars and stick close enough to established genre tropes that they should have at least pulled their own financial weight. We’ve seen worse movies make more money than Ecks vs. Sever, and we’ve seen worse movies lavished with more critical attention. It’s bland. So is The Secret Life of Pets. So is Men in Black: International. I’m certainly not sanctioning this buffoonery, but it really feels like Ecks vs. Sever did the bare minimum to pass with a C. And I’m talking about the general public, here, not necessarily discerning Movie Lovers. How is it possible that this didn’t ride the Matrix hype to the bank? Do I just not understand people?

Adam: I don’t think it deserves a 0% score, but under the rules of Rotten Tomatoes, where it’s a pass/fail system, I understand why no one who’s watched it thought there was enough there for a recommendation. My guess as to why it didn’t make more bank would be 1) The title is ludicrous and single-handedly makes the movie sound like a punchline and 2) By 2002 the Matrix residual affection had already been given to Romeo Must Die, Crouching Tiger, Hidden Dragon, Equilibrium, Charlie’s Angels, and The One. Ballistic: Ecks Vs. Sever was too late to the game. The only thing that was going to get Matrix love at that point was a sequel to The Matrix.

I have to say though I am nostalgic for this type of action movie. It feels very New Line-ish, where a studio is trying to cash in on hip elements and make a movie of its time. This seems harder to do now because (as we coincidentally discussed last weekend) pop culture is so fragmented that there really are very few actual trends anymore of what’s popular in the mainstream.

Do you think Ballistic: Ecks Vs. Sever could work in 2020 if they remade it? Who would you cast in the two lead roles?

Also, did you know there was a Game Boy Advance game called Ecks Vs. Sever released to strong reviews a full ten months before the film’s release? Apparently a sequel game (called Ballistic: Ecks Vs. Sever) came out shortly after the movie was in theaters which followed the movie’s plot line. It wasn’t as well received as the first game. 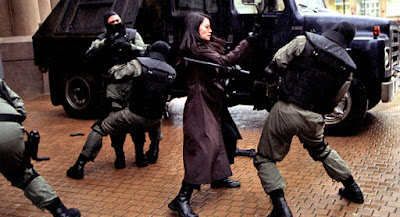 Rob: So after I read that, I went and watched a few YouTube videos of gameplay. Did you know that Jonathan Ecks (no middle name) graduated with a “first class” degree in criminal psychology from Harvard at age eighteen? He earned a PhD in criminal law at age twenty-one! This movie should have been called Dr. Ecks vs. Sever! The game is also notable for putting the player through eight to ten solid minutes of transcript-based exposition between levels. It’s incredible what we used to put up with. Anyway, I guess you’re right about the film being a little too late to ride the Matrix bandwagon. The space between 1999 and 2002 is more compressed in my memory than it was in reality.

But I digress. An Ecks vs. Sever remake would need a plot overhaul if it wanted to rise any higher than Redbox status. I never got the sense that Ecks knew or cared who Sever was (Did I miss something? The video game suggests he knows her backstory), so finding a way to intertwine their stories and/or create more tension between them might make things compelling. You had to explain to me that Ecks’ wife and the Taliso Soto character weren’t the same person, which shows you just how bored I was. Hell, the movie isn’t really Ecks VERSUS Sever for more than ten minutes or so. How about Oscar Isaac and Samara Weaving for the leads? Get Walton Goggins for the Gregg Henry part, for sure. Most importantly: Bring back Ray Park! Pull a Casino Royale and just let that character cross over. He’d be all, “Oi! Give the fans what they want, mate! They wanna see Park! They wanna see the flippity-flip! You think Chris Pratt’s gonna do a proper flippity-flip? No way! I said to George [Lucas] once, I said: ‘You don’t think I can do it, do you?’ And he said, ‘That’s why I hired you, innit? The flippity-flip and the twirly-twirl.’ But he didn’t believe, right? A billion dollars later, he believed! Ron Howard, right? He didn’t let me do the twirly-twirl, and, you know, we saw what happened there.”

Adam: Oh, Park. The only change I would make to your ranking is swapping #3 and #4. I can see headlines that say “Fah is meh.” Reel talk: I think any appreciation I had for Ballistic: Ecks Vs. Sever came from the “Making Of” supplement we watched on the DVD after the movie was over. Kaos seems like a nice dude who tried to make a good movie. The IMDB trivia makes the case that the movie was hurt by producer interference. I guess we’ll never know. Anything else to say about Ballistic: Ecks Vs. Sever?

Rob: Aside from “Don’t watch it”? Nope! What are we talking about next week?