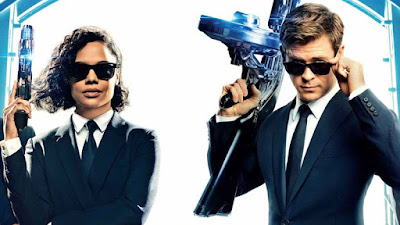 In which Tessa Thompson does her best.

Mild spoilers ahead for Men in Black: International.

Men in Black: International is another in a long line of studio re-quels that seem to follow an identical formula: Make a list of the tangible details that audiences recognize from the original films (dinosaurs, proton packs, neuralyzers), crank each one up to eleven, throw in a few easter eggs and mythology gags to keep the die-hards happy (maybe a cameo or two from franchise legends), and hand things over to a sexy new cast who can keep the property viable for the foreseeable future. Sometimes, this works. Sometimes, you get Casino Royale, Mad Max: Fury Road, or even Alien: Covenant. Other times, you get Jurassic World, Terminator: Genisys, or Ghostbusters (2016). No matter the result, your goal is to build a galaxy out of a single star — to bottle that lightning for mass production. 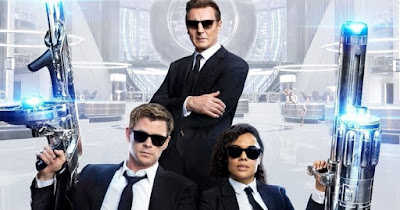 Trouble is, great art is alchemical. It has to be felt out. There needs to be trial and error. There needs to be a beating heart, a song to be sung. Even franchises that employ tried-and-true formulas often fall victim to a harsh reality: not even the audience always agrees on what that formula is. Some go to Jurassic Park films to see CGI dinosaurs smash buildings and maul tourists. Some go to Star Wars films to see bearded wizards crash lightsabers into each other. Some go to James Bond films because women are objects and it’s our job to remind them of that. What the audience doesn’t always realize is that dinosaurs and lightsabers and misogyny aren’t what make those films work. It’s the stories beneath them, the ones about good and evil and science and discovery and bravery and responsibility and love. The original Men in Black film featured aliens, fast cars, stylish suits, and laser guns, yes. But it wasn’t about those things. 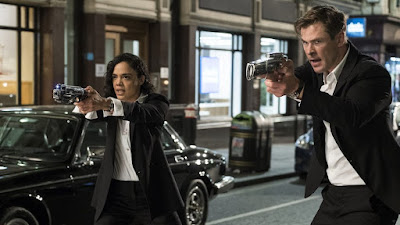 Men in Black: International, on the other hand, is more or less about those things. Her Royal Highness Tessa Thompson is Molly, a high achiever whose childhood run-in with an alien inspires a quest to prove that The Truth is Out There. She soon gets all the proof she needs, tracking MiB agents to their New York headquarters and sneaking her way inside. The MiB catch her, of course, but Molly convinces Agent O (Emma Thompson) that she’s worthy of a suit and tie of her own. Agent M’s first assignment? MiB London, where she and cocksure Agent H (Chris Hemsworth) investigate the death of an alien royal and the loss of a galaxy-destroying super weapon. Agent High T (Liam Neeson) oversee the unlikely partners, whose globe-trotting adventure — hence the International — has them crossing paths with intergalactic arms dealers (Rebecca Ferguson), tiny alien soldiers (Kumail Nanjiani), and deadly twin assassins (Larry and Laurent Bourgeois).

It’s a fine enough premise, and if Men in Black: International had just gotten out of Thompson and Hemsworth’s way for ten seconds, it might have worked as a movie. Instead, the pair (who sparkled in Thor: Ragnarok) are forced to sneak their performances in between set piece after boring, repetitive set piece, never really able to find rhythm enough to dance. Molly’s rushed assimilation with the MiB (a training sequence literally comprised of Emma Thompson pressing a button) robs her of any real characterization; we know she’s an intuitive and creative nerd who wants to understand “how it all works.” Great! What’s preventing that? How will she get there? What song inside her needs to be sung? We’re never shown, so there’s no depth to Thompson’s nuanced and human performance. Hemsworth’s Agent H is even thinner; we’re constantly told that he was a great agent once, that he’s “changed.” But the reason behind that change — intriguing as it is — ends up having zero tangible effect on his character. Hemsworth’s left doing late-phase Thor (yes, there’s even a reference), a jokey persona that gets tiresome very, very quickly. 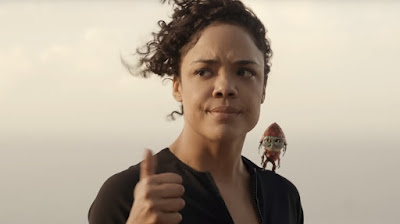 This is all the more frustrating because there are times when Men in Black: International briefly flirts with higher purpose. Thompson’s Agent O laments that MiB’s glory days are behind them, that while they once protected the Earth from the scum of the universe, they now seem to be protecting the scum. Had this been developed at all, it might have made for cogent political commentary. It isn’t. Thompson herself is a powerful blast of Bisexual Energy — she wears the suit better than anyone, save maybe Will Smith — but a cringy “WOMen in Black” moment turns a narratively-rich issue into a throwaway joke. It’s lip service, at best, but the film can’t be bothered with addressing it because it needs a ten-minute action sequence in which our heroes pull ever-growing laser guns out of hidden compartments in their Lexus. It needs a scene where H rides a space bike and shouts, “This is nothing like riding a bike!” It needs Kumail Nanjiani (who, in fairness, is very good) to make jokes and/or comment on other characters’ jokes. It’s all just so empty. What song are we singing, again?
Posted by Patrick Bromley at 5:00 AM