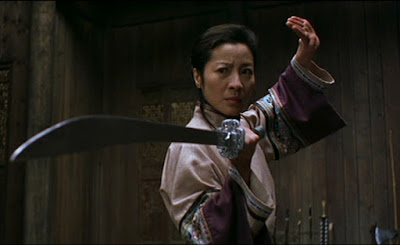 Nominated for “Favorite Action Team (Internet Only)” at the Blockbuster Entertainment Awards.

Welcome to 2K Replay, the home of the year 2000 in film. This month I’m revisiting the movie a friend at my fraternity paid tribute to with a desktop screensaver: Crouching Tiger, Hidden Dragon.

• Best Food: A tie between Zhang Ziyi eating chicken in a cave and ordering shark fin soup in a restaurant.

• Best Merch Available on eBay Right Now: A letter opener made to look like the Green Destiny sword complete with a scabbard for only $15!

• Director Check: After success with independent and period-costume dramas, this was the movie that gave Ang Lee freedom to make whatever he wanted for a while. Left to that device, he usually makes something confounding (e.g. Hulk after Crouching Tiger, Hidden Dragon or Billy Lynn’s Long Halftime Walk after Life of Pi). Lee has made a couple good/great movies since Crouching Tiger, Hidden Dragon (Life of Pi, Brokeback Mountain), but is now seen as less consistent than he was earlier in his career. He’s no longer a director whose every movie is a must-see.

• Year 2000 Movies to Trailer Before It: Romeo Must Die, Shanghai Noon, Charlie’s Angels

This video game looks dope. I can’t wait for September 2003!

• How Did It Rent at Blockbuster? My memory is that it rented well but wasn’t ever completely out of stock. It’s probably because this was when people were just as excited about buying DVDs (it was a popular purchase). Also, Crouching Tiger, Hidden Dragon had a hit theatrical and awards season run, so there appeared to be a minor level of burnout by the time of its home release.

• Mall Movie? Martial Arts movies typically are, but this was presented as being classy and arthouse (e.g. it’s a Sony Pictures Classics release). The mall might have gotten it post-Oscars at the end of its theatrical run.

• Only in 2000: The shuttery frame rate effect in the middle of some action sequences. For the most part, these scenes are beautifully staged in wide-angles and medium shots but occasionally there’s a few frames where it looks sped up or tweaked.

• Scene Stealer: Bo (Gao Xi’an). He pops up throughout the movie as some sort of security personnel. He seems like a solid dude.

• I Miss: The days when a foreign-language martial arts movie could make over $128M domestically and become a zeitgeist conversation topic among moviegoers that usually didn’t see martial arts or foreign films.

• I Don’t Miss: Some of the wire-work in the action sequences. I think they’re great when the moves are smaller (hand-to-hand or sword fighting), but the whole flying across rooftops and trees hasn’t aged well. 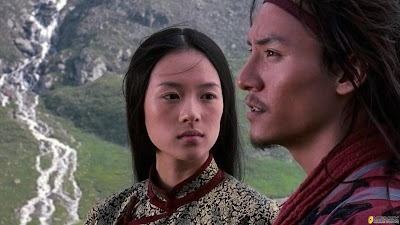 • 2000 Crush: Zhang Ziyi. I was pretty sure loving me was the course correction her character needed.

• 2020 Crush: The courtship of Michelle Yeoh and Chow Yun-fat. There’s nothing more fetching than two damaged adults tentatively in love.

• What I Thought in 2000: I was very much in the bag for Crouching Tiger, Hidden Dragon.  remember it being either my favorite or second favorite movie of that year. I saw it twice in theaters and owned it on DVD. In 2000, I wished it took Best Picture over Gladiator at the Academy Awards.

• What I Think in 2020: I still like it quite a bit. I wasn’t expecting it to hold up as well as it has. Good drama will always be good drama.
Posted by Patrick Bromley at 5:00 AM