This movie is about a fucking monkey. (Literally.) But that’s not a bad thing!

I am pleased as punch that Scream Factory keeps doling out the Universal Monster goodness with its Universal Horror Blu-ray sets and its stand-alone releases like this tasty Robert Florey gem from 1932. It has a lot in common with Edgar Ulmer’s The Black Cat from 1934 in that it tried to stretch the boundaries of what was acceptable content for a horror film at that Pre-Code time. Studio head Carl Laemmle was aghast at both films and ordered both to be cut and scenes to be reshot. Murders in the Rue Morgue was a box office disappointment; The Black Cat was Universal’s top moneymaker of the year. 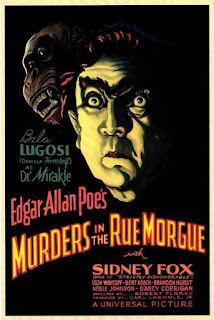 Murders in the Rue Morgue represented something of a consolation prize for both Robert Florey and Bela Lugosi. They had been slated to direct and star in Frankenstein, Universal’s follow-up to the enormously successful Dracula in 1931. Lugosi famously turned down the role of the monster because he had no dialogue, and Florey was unceremoniously replaced by James Whale. Florey was given his choice of property to film next, and he chose the famous Edgar Allen Poe short piece that introduced the “detective story” to the world of literature.

The Plot in Brief: Dr. Mirakle (Bela Lugosi) appears in a Paris sideshow with his performing ape, Erik (Charles Gemora). Little do audiences know that Mirakle is also an amateur scientist obsessed with cross-breeding apes and humans. An earlier experiment with a prostitute fails, but Mirakle becomes obsessed with young Camille L’Espanaye (Sidney Fox) and is convinced that she will either 1) fall for him in a big way, though she is already engaged to another, saner man; or 2) make a charming partner for Erik. The whole thing is pretty gross. Sure, parts of the film suggest that Mirakle wants Camille for some kind of “blood transfusion” experiment, but I suspect that this material was part of studio-requested reshoots: the mad doctor is obviously interested in a more, how shall I say, DIRECT way of mingling the species. The rest of the movie is fairly explicit about the fact that Mirakle wants Gorilla Erik to “partner up” with the lovely Camille; in her sequences, no one talks about blood transfusions. Oh! I would love to see the original film Florey turned in before it was sanitized.

How much of his original was cut? Almost 20 minutes—the film went from 80 minutes to a brisk 61! 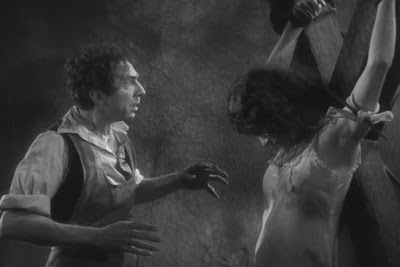 I so admire both Florey and Ulmer working behind the scenes to expand the world of horror films in the 1930s. Dramas were dealing with much more adult subject matter, so why not horror films? Ulmer’s The Black Cat involves a protagonist trying to get revenge on the man who slept with his wife, killed his wife, slept with his daughter, and kept his wife’s body preserved in a tube. His revenge involves skinning the man alive while the victim is chained to a giant wooden cross. Did I mention the bad guy is also a Satanic Priest who stages human sacrifices for his “flock?” You know… Saturday afternoon matinee fun… for the kiddies.

Speaking of that giant wooden cross… Murders in the Rue Morgue features a flashback (in the film’s original cut, it was the first sequence) wherein Mirakle kidnaps a Parisian prostitute. (She’s played by Arlene Francis… Yes, THAT Arlene Francis from What’s My Line? in the 1950s. Murders in the Rue Morgue was her first film and, after her father saw it, he threatened to disown her.) Mirakle chains her to a giant wooden cross for an “experiment.” Could both films, made only two years apart at Universal Studios, USE THE SAME GIANT WOODEN CROSS? Now, there’s a piece of film history to go searching for. Forget about the rosebud sled or Dorothy’s ruby slippers; I want to own the Universal Torture Cross, which I promise I would use FOR DISPLAY PURPOSES ONLY!. 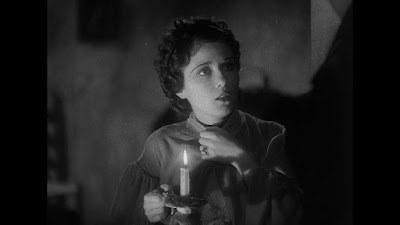 Predictably, Bela Lugosi is the best thing in the film. His Dr. Mirakle is deliciously mad and over-the-top, just the way we all love to see Bela during his heyday. Proving how successful and influential the original Dracula was, for years afterward other filmmakers kept photographing close-ups of Lugosi’s eyes in obvious shout-outs to similar shots in Dracula. Robert Florey does it in Murders in the Rue Morgue, Edward Halperin does it in White Zombie, Charles Barton does it in Abbott & Costello Meet Frankenstein (although Lugosi is playing Dracula again in that one), and even Ed Wood does it in Glen or Glenda!

Scream Factory’s new disc is great fun. The transfer is not spectacular, but it is very, very good. The two commentary tracks, by Gregory Mank and Gary Don Rhodes, are worth the price of the disc alone. I have opined often in this space that Mank is a national treasure and should be given some sort of award. His commentary is aces, but that should come as no surprise. Has any disc producer out there ever given serious thought to a “Universal Monsters Supergroup” commentary track featuring Greg Mank, Gary Don Rhodes, and Tom Weaver? I, of course, would be contractually obligated to be in the room too, but only to serve the three men drinks and snacks. 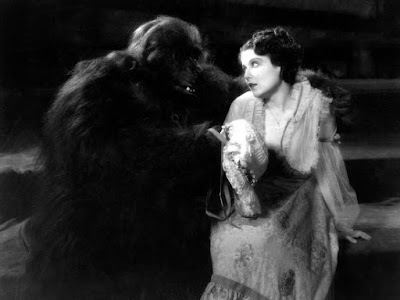 If you’re a fan of modern horror, you may want to edumacate yourself on the early boundary-pushers that helped make your modern favorites possible. This new release is a great opportunity to start doing that. I sometimes wonder why modern horror films, with no restrictions on their content or rating, don’t contain more monkey fucking and villain skinning. Ari Aster, get on that. Stat!