Like any profit-based business during the Depression, Universal Studios couldn’t pass up an opportunity to strike gold (again) in 1931.

Dracula, released on St. Valentine’s Day of 1931, singularly saved Universal Studios from bankruptcy. Clearly, monsters equaled money, and the studio cast about looking for another horror property to convert into movie gold. Rushed into immediate production, Frankenstein debuted on November 21, 1931, just seven months after Dracula. Frankenstein was a massive hit—the Jaws of its time—and the studio’s continued viability was assured. 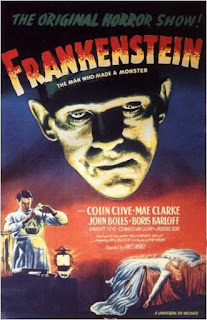 I like to remind everyone within the sound of my virtual voice about these important facts because Universal Studios goes through occasional periods of monster amnesia. Though the AMC multiplex at Universal Studios Hollywood’s City Walk sports a humongous steel facade of Frankenstein’s Monster and his Bride, it still sometimes seems that Universal is somehow embarrassed by its monster legacy. Once many years ago, while riding the iconic Universal Studios Tram Tour, I was subjected to a tour guide who actually commented, “Yeah, back in, like, the ’30s? Universal couldn’t, like, afford… any big stars? So that’s why they had to, like, make horror movies? Because, like, you know…they could put ANYONE in a ton of make-up, and sort of just make a horror movie? One time me and my boyfriend Kyle made love in that creepy Munsters house… and it was fantastic? Like, in a cool way?”

Okay, maybe she didn’t actually say that last part. I couldn’t really pay attention to anything by then because I was concentrating on keeping my head from exploding.

Further proof? When Universal Studios Hollywood needed room to build some Harry Potter stuff, which existing attraction was bulldozed to make way for The Boy Who Lived? Why, the monster-themed “House of Horrors,” of course, only THE GREATEST SINGLE THEME PARK ATTRACTION IN THE HISTORY OF THE WORLD. Actually, it’s worse than that. The “House of Horrors” site didn’t even get to feature a ride… it was bulldozed to make way for the section’s new Starbucks. At least instead of a coffee house, they could have built a quick-service restaurant devoted to hot dogs and beer and named it “Frank ‘N’ Stein.” No joke-- such places have existed and still exist because of the National Zoning Law that requires all hot dog joints to incorporate awful puns in their names. (I’m looking at YOU, “Weiner Take All.”) Look, here’s photographic evidence: 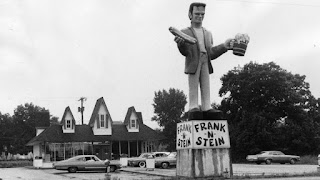 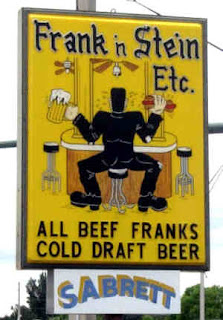 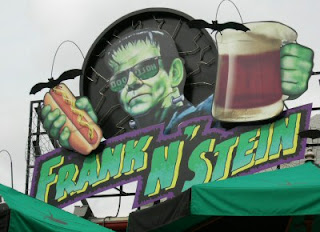 Enough silliness. Frankenstein is a masterpiece.

The Plot In Brief: Henry Frankenstein (Colin Clive) has turned his back on the rest of the world, and toils away at an obsessive experiment to reanimate the dead. With his twisted lab assistant Fritz (Dwight Frye), Dr. Frankenstein robs graves and stitches together pieces of the various corpses. One fateful night, he means to give his creature life.

Meanwhile, Henry’s fiancé Elizabeth (Mae Clarke), friend Victor (John Boles), and former teacher Professor Waldman (Edward Van Sloan) pay a visit to his castle laboratory. They have come at the right time. With a storm raging outside, Henry is forced to let them in, and they have arrived at the very moment that the mad experiment has reached its apotheosis. The Monster from his slab begins to rise. “In the name of God, now I know what it feels like to be God!” shouts Henry in a spasm of joy and personal hubris.

The monster is a violently aggressive brute. This may be due to the fact that its brain, stolen from Professor Waldman’s classroom, once belonged to a criminal; or it may be because Fritz regularly tortures the monster with a flaming torch. Waldman volunteers to humanely end the monster’s life. Things do not go as planned. 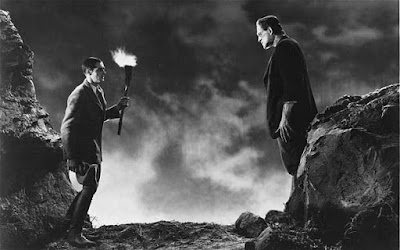 The 1931 Frankenstein has everything: a spooky atmosphere, great performances, an astounding makeup design, state-of-the-art special effects, impressive cinematography, and a brisk pace. I believe another reason that James Whale’s film version of Mary Shelly’s classic tale still resonates in popular culture is that it contains a barely disguised theme to which we can all relate: Bad Dads.

It makes me very happy that Mary Shelley’s terrific source novel has enjoyed something of a Renaissance on college campuses in the last thirty years, as more and more literature professors assign it as an early feminist work. Shelley’s mother, Mary Wollstonecraft, was an early feminist, and the book is full of imagery and ideas relating to what one might call “the abomination of male birth.” When women are involved, it’s a natural and beautiful process. When men take over, it involves loud machinery, loads of electricity, and strange chemicals. Clearly, one of the questions bubbling away in Frankenstein’s lab is what exactly happens when males attempt to create life alone. What happens when Dad is put in sole charge of creating the… offspring?

What we get is dysfunction and horror. Look at the film’s three father figures: whiny and irresponsible Henry, affected and sour Professor Waldman, and buffoonish and ineffectual Baron Frankenstein (Frederick Kerr). If these are the Monster’s only sources for paternal guidance, is it any wonder that he has no idea how to treat a child—and that the first child the Monster encounters, he irresponsibly (albeit accidentally) drowns? 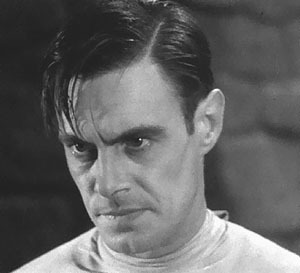 Henry is completely wrapped up in his own pretentious posturing and self-pity. He crows about his god-like ability to bring new life into the world, but never acknowledges the considerable responsibility that comes with it. New life must be guided, taught, and guarded; Henry’s first response to fatherhood is to lock his progeny in a darkened room where his “son” is, by turns, tortured and ignored. The Monster kills Fritz—Henry again proving his ineptitude as a father by doing nothing more than whining for Fritz to “Leave it alone! Leave it alone!”—and when his progeny causes trouble, Henry’s next response is to kill it. Henry spends so much time and energy creating life, but precious little of either to help that life thrive. Henry’s annoying dialogue is full of sound and fury and good intentions, but he is completely ineffectual once fatherhood demands that he actually step up. I know some fathers like this. 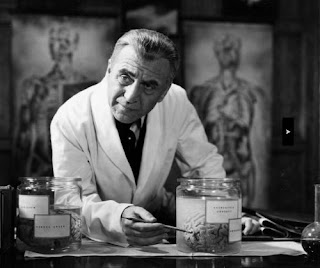 Professor Waldman is the second father figure in the film. Elizabeth and Victor summon him, hoping he can talk some sense into former student Henry. Yet Waldman is incapable of any fathering beyond arguing with Henry and showing rigid, stentorian distaste for any of the young man’s dreams or ideals. He opposes Henry’s work on every front and only lobbies for the Monster’s destruction. Waldman is incapable of empathy or compromise. He is a brick wall. I know some fathers like this. 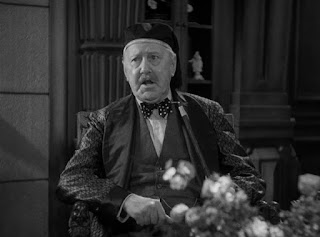 Last, we have Baron Frankenstein, Henry’s actual father, who is little more than comic relief in the film. Frederick Kerr plays the part so broadly that the character is never taken seriously. He doesn’t trust Henry—heck, he doesn’t even seem to like Henry—and he is simply anxious to have his son’s wedding over and done with. Henry seems like merely an annoying inconvenience to him. The Baron has little to do with Henry’s life or the film’s plot, and the single scene where he ventures forth to bring Henry home seems weirdly out of place. Flustered, clueless, and braying, Baron Frankenstein is the early nineteenth century version of two modern negative archetypes—the cranky “get off my lawn” dad and the bumbling dolt. I know some fathers like this.

Ironically, the film ends with Henry and Elizabeth reunited, their upcoming nuptials assured, and Baron Frankenstein drinking a toast to “A Son to the House of Frankenstein!”