Songs I Love from Horror Movies 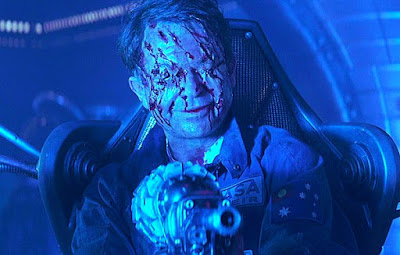 Spooky tunes perfect for the season!

Let’s kick off this playlist with a classic. I love Rob Zombie music videos. They’re mini-horror movies (this one a tribute to The Cabinet of Dr. Caligari that I might dig just as much as the movie itself) and it makes my horror heart happy to see any collaboration between Mr. Zombie and his muse Sheri Moon Zombie. This song kicks ass 20 years later. Unlike my next pick…

Title: “What If”
Artist: Creed
From: Scream 3

The Scream movies had not only great scores, but also terrific soundtrack compilations. Scream 3’s most memorable track (for better and for worse) was this tune from Rob’s favorite band, Creed. “What If” might be their closest thing to a good song (it’s better than Scream 3 as a movie, I’ll say that much). I still remember when Daughtry performed this song on American Idol and Simon Cowell was having none of it and called him indulgent. It was funny. Why does this music video turn into Scream Jam at the 2:43 mark? The dunking makes zero sense. Also, I love having David Arquette on hand to play Dewey, but watch the end…did Ghostface just kill him off? Does this count as canon? Was Dewey a ghost in Scream 4? I may have stumbled onto something here that’s bigger than all of us.

This song (like the movie it’s from) is just okay, but how could I not include a video by a band with the phenomenal name Laaz Rockit? Bonus points to them for making their guitars sound like revving chainsaws and then chainsawing an actual guitar for the finale. It’s not something you see every day.

Title: “Be Careful What You Wish For”
Artist: Wayfarers
From: Wish Upon

Do you ever make it to the end of Wish Upon and get frustrated that you can’t sing along with the tune playing over the end credits? Of course you do. This lyrics video is here so you never have to feel that powerless again. This song also doubles as perfect background noise for when you write your Stan letters to the cast of your favorite CW show. Do you think in the multiverse this song went triple-platinum?

Title: “Anyway I Gotta Swing It”
Artist: Whodini
From: A Nightmare on Elm Street 5: The Dream Child

I’m convinced this is the song Stephen Hopkins bumped in his car in late-1989. It’s so funky and fresh and fun. I mean…you can’t beat the 2:03 mark when Freddy answers “Yeah!” when Whodini asks “Can we take ‘em to the streets?” (Spoiler: The street is Elm St.). I also enjoy every time they do that zigzag Freddy jump down the stairs; it’s aesthetically pleasing. Do you think the abrupt cut to black at the end (when Whodini is going into the house) is like the end of The Sopranos and that’s when Freddy whacked Whodini? This video further proves my theory that anything associated with The Dream Child is special.

I’m very glad I stumbled upon this fan ballad dedicated to the 1997 horror classic, Event Horizon (our friend, Heather Wixson, is probably even more glad). It’s the rare fan song that’s kinda good on top of being a funny joke. I’ve been repeating the lyrics “EVENT HORIZON!” and “Captain Miller…won’t you take my hand?” to myself all weekend #BecauseICan. The earnestness of this video and performance reminds me of David Brent (Ricky Gervais) music on the UK version of The Office where you know you’re supposed to laugh at it, but it’s catchy too.

My favorite new-to-me discovery so far of #ScaryMovieMonth 2018 is The Monster Club. This is the best song from that film for sure. At first, I was all “I don’t like the music in this movie” and then “The Stripper” starts, it’s incredible and I was completely won over by the rest of the movie. I never wanted this anthem to end. The best part is mid-way through: a stripper bares all and when I say bares all I mean she turns into a cartoon skeleton. I would go to strip clubs constantly if shit like that actually happened on the regular. Vincent Price and John Carradine seem to agree with me. They’re real boners here.

What are some other songs you love from horror movies?
Posted by Patrick Bromley at 12:00 PM