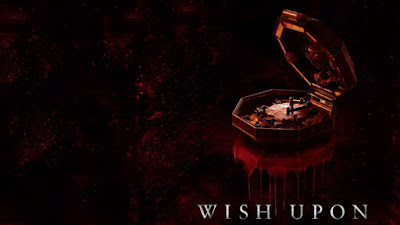 If you do too, you might have as much fun as I had during Wish Upon. If you think the movie seems dumb at face value, you should probably skip it. What you’ll miss, though, is another so-bad-it’s-good gem in what is turning out to be a banner year for films of the sort (other examples include The Bye Bye Man, The Circle and All Eyez On Me). When you see as many movies in theaters as I do, it takes the pressure away from any one movie having to be more than just interesting or entertaining to satisfy. I think it’s healthy to enjoy all art even, when it’s low. The greatest sin a “bad” movie can commit is being boring or without personality, so one that is as brazen in its nonsense as Wish Upon should be enjoyed. 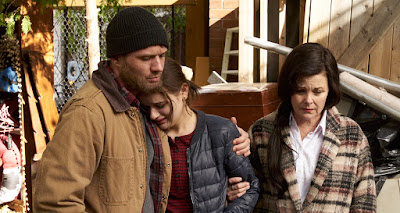 Wish Upon tells the story of a high school outcast (who has friends and stands up for herself, so maybe she’s not very good at this outcast thing) named Claire (played by Joey King) who receives an ancient Chinese wish/music box as a birthday present from her dumpster diving Jazz musician father (played by Ryan Phillippe). Luckily, Claire is taking Chinese in school, so she can read the inscription telling her she gets seven wishes from the wish box. She doesn’t read the fine print, though, that tells her a blood price has to be paid with each wish. As Claire’s life gets super dope (the boys, the purses, the parties) and the body count rises, it is up to Claire and a few friends to stop the madness before it’s too late.

Ok, lots to unpack. I love this film’s details, some of which I already mentioned in the plot description. Let’s start with the Phillippe character, who makes no sense whatsoever. He and Joey King live in a decent house in a nice neighborhood and yet he dumpster dives for a living? He even has a friend he does this with who never stops to mention “Hey, Phillippe, why don’t you sell your house instead of digging through fucking trash literally steps from your daughter’s school?” Also great are asides like when Claire asks her Chinese language teacher for help transcribing some of the more obscure Chinese written on the box. He answers “That’s ancient Chinese. You’re going to need a scholar for that.” Aren’t…you…a…scholar? Then seconds later a classmate named Ryan (played by Ki Hong Lee) comes up to Claire and says “My relative can translate that for you…for a price.” Claire answers “What price?” Ryan answers “She loves wontons.” This is the script we’re dealing with, people. Throw in supporting turns from Chaybee’s own Sherilyn Fenn and your precious Barb from Stranger Things, an awful proxy of Pokémon Go, a high school slap fight that is edited like something from Mortal Kombat (Wish Upon director, John R. Leonetti, helmed Mortal Kombat: Annihilation) and some hilariously shot Final Destination type kills (the final one being a masterclass) and you have a movie that left me grinning ear to ear when I wasn’t laughing for its ninety minute runtime. I think Wish Upon knows how dumb it is, but I’m not entirely sure. Therein lies my fascination. 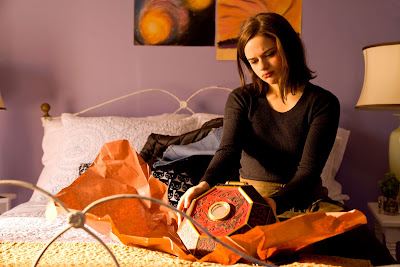 For a movie as on-its-face goofy as Wish Upon, I give all the credit in the world to the cast for playing it straight. Because they are not in on the joke, it allows the audience to savor the silliness more. I have liked Joey King in the past, but Wish Upon has made me a super fan. She totally knows how to play schlock like this (though nothing will ever top this scene from White House Down) and she’s a sympathetic and likable lead in Wish Upon. I laughed so hard after her first wish (where she wishes her high school rival would rot) and when she sees a pic on a phone of the other girl’s new skin problems, King goes “Omg, she’s rotting” and does this bug-eyed WHAAAAAAATTT face when she realizes what she just said. It’s priceless. Ryan Phillippe is good in an impossibly written role, too. It’s like he’s wringing every last drop of normalcy and humanity from his dumpster diver whose moments playing Jazz saxophone reminded me a lot of Lisa Simpson (plus, he manages to never whitesplain it to anyone!). The rest of the cast is very broad, but in a way that adds to the fun. I love how earnest Ki Hong Lee plays his role as one of the many voices of reason trying to get through to Claire. He has an amazing scene where he and Joey King have a conversation that goes something like

Ryan: “Why did you fart and tell everyone I was the one who farted when we were kids? They called me McFarts for a long time.”

Claire: “Maybe we’re in a multiverse where I didn’t say it was you who farted because neither of us farted.”

Ryan: “You dig on multiverses? Maybe we’re in a multiverse where neither of us farted and we’re dating?”

Eat your heart out, Robert Towne. Wish Upon is no Wishmaster, but it’s better than It Comes at Night. There’s your DVD quote -- courtesy of the Riskmaster, with love.
Posted by Patrick Bromley at 5:00 AM