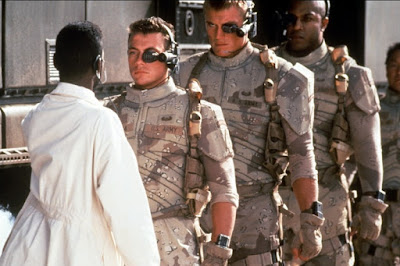 We just want to eat.

Adam: Welcome back to Summer ‘92 Redux, our revisit of the Summer 1992 movie season. This week we’re discussing the original Universal Soldier, directed by Roland Emmerich and starring Jean-Claude Van Damme, Dolph Lundgren and Ally Walker. It tells the story of two soldiers - Luc Deveraux (Van Damme) and Andrew Scott (Lundgren) - who kill one another during a confrontation in Vietnam. Both men are re-animated decades later to join a team of super soldiers run by a military unit with sketchy motivations. One day on a mission, Deveraux remembers Scott being a psychopath who executed civilians in the war and turns his back on the team of UniSols in order to protect a TV journalist (Ally Walker).

Universal Soldier has developed into a complex and bizarre action/drama franchise over the years but started as a more conventional "versus" movie pairing Van Damme and Lundgren during their prime. It’s also broadly comedic in stretches, with many scenes punctuated by townspeople reacting in disbelief to being thrown in the middle of zombie soldier showdowns. Universal Soldier, in 1992 at least, felt like it was born to capitalize on the success of 1991’s Terminator 2: Judgement Day. Even though it’s a step down from that epic, Universal Soldier has its charms and is extremely watchable. This was my first time revisiting Universal Soldier in probably 25 years (every other time I watched it might have been at sleepovers) and while it’s not among my favorite Van Damme movies, I enjoyed many aspects, including Van Damme’s repartee with Ally Walker. I thought she was going to be a movie star coming off her performance in Universal Soldier and that never really happened, which is a shame. She’s awesome in this.

Are you a fan of the original Universal Soldier?

Patrick: I’m a big fan of Universal Soldier. This is top 3 Roland Emmerich for sure, from that brief period when he was making really interesting and exciting studio sci-fi. This is a B-movie through and through even by 1992 standards, but it’s one that’s proud to be a B-movie and leans into that fact rather than trying to dress it up in prestige, the way many of Emmerich’s later movies would do. It’s big and dopey in the best way. Like you pointed out with Terminator 2, it wisely makes good use of Van Damme and Dolph Lundgren’s limited acting abilities. Van Damme underplays everything, while Lundgren goes super big and hams it up as the villain. There’s also something to be said for the fact that both action stars are immigrants whose bodies are churned up and used as collateral. I don’t think that’s what Emmerich had in mind when he cast them -- I’m sure it had more to do with their box office cache as action stars -- but it creates an interesting political subtext about the country’s treatment of immigrants. 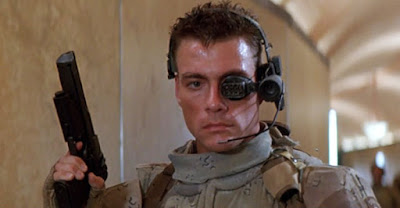 I’m glad you mention the humor. There’s a lot of it in the movie, but I feel like it lands better here than in a lot of Emmerich’s subsequent work, which tends to be jokey but never funny. The humor in Universal Soldier is a little more subtle, for lack of a better word, probably because the whole endeavor feels more small-scale and stripped down than the direction that Emmerich’s filmography would take in the span of just a few movies. JCVD’s reaction to Ally Walker punching that guy out will never not be funny to me. Same with his delivery of “I just want to eat.” I think it’s because he has a little bit of food in his mouth.

Where does this rank for you among Roland Emmerich’s movies? And because you’ve seen Universal Soldier: The Return much more recently than me, do they reference the fact that Michael Jai White was one of the soldiers in the Vietnam sequence that opens the first movie? These are things I’m willing to get to the bottom of.

Adam: I’ve never seen Stargate, so I’ll say Universal Soldier is my second favorite movie of his after Independence Day. I’m not a fan of Roland Emmerich overall. I appreciate his affection for disaster movies, but I feel like he’s not (especially lately) trying to sincerely make a good one. As you said before, his earlier movies are the better ones because they lean more into the B-movie sci-fi tropes and feel elevated at least a little bit with the energy of someone on the upswing of their career.

I’m pretty sure Michael Jai White is not the same guy in Universal Soldier: The Return, although it’s possible since he’s just named “Soldier” in the cast listing for Universal Soldier. In the sequel, Jai White’s body is a UniSol host for an evil artificial intelligence program so maybe he was one of the soldiers brought back from Vietnam to be experimented with??? Good observation. I feel like if I ask him on Twitter he might answer.

You and I like to talk about defunct studios and production companies with fondness sometimes. Universal Soldier comes from one of those companies: Carolco. They were behind not only this movie, but also several Rambo movies, Total Recall, Jacob’s Ladder, The Doors, Terminator 2: Judgement Day, Basic Instinct, Cliffhanger, Stargate, Showgirls, and eventually went under because of Cutthroat Island. Whenever I saw the Carolco logo, I thought “Oh this is going to be a metal movie,” because it was going to lean into sex, violence and profanity. They were a proudly adult production house. I love their bumper before movies too with the laser forging the movie you’re about to see in cool, metallic sleaze. Is this a company you have nostalgia for? I miss them. They took big swings. The violence in Universal Soldier looks like it hurts more than it does in a lot of other movies. You could say that about the majority of this franchise.

Patrick: Oh, once John Hyams takes over, the violence gets insane and so brutal. I love those sequels so much. 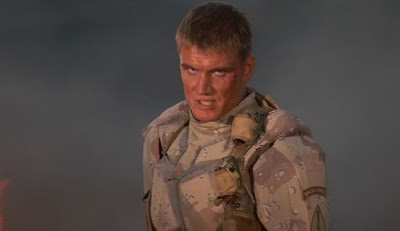 I wouldn’t have automatically said I have any nostalgia for Carolco, but looking over that list of their output, I’m totally in the bag for everything they did. These were movies that defined my childhood and early teen years. Even something like The Doors was a huge deal to me for some reason, even though I wasn’t (and still am not) a huge Doors fan at the time of its release. I like that they worked so much with Paul Verhoeven and that they’re responsible for some of the best action movies of the late ‘80s and early ‘90s. It’s too bad they went under, especially for making a movie that’s secretly pretty good.

Despite me thinking that Universal Soldier is a really cool movie, I don’t think it’s that great a vehicle for JCVD. He’s good in the part as I mentioned, but it could have been played by just about any action star with a willingness -- nay, a need -- to show off his butt as often as possible. The novelty of getting to see him square off against Dolph Lundgren is pretty cool, but there were a lot of movies coming out around this time that served as better showcases for what he could do. Am I wrong on that?

Adam: Maybe that’s why it’s not up there with my favorite Van Damme movies. He feels a little restrained most of the movie (by design because he’s an undead soldier) and relieved when he can be comedic. I think he might have recognized that for Universal Soldier: The Return where he’s playing things a lot lighter. You almost can’t tell at all that he’s a zombie. He just acts like a regular guy with Van Damme mojo in the sequel.

Adam: That would be the easiest song to perform at karaoke. I applaud its directness and simplicity.

A few questions:
1. Do you prefer Universal Soldier: Regeneration or Universal Soldier: Day of Reckoning?
2. Now that the dust has settled, is Universal Soldier as good of a franchise as the Terminator series?
3. What is it about Jean-Claude Van Damme that appeals to you most? He’s my favorite action star and I know you’re a big fan too, so I’m curious. To me, he’s all the colors of the rainbow; like the complete human experience. I appreciate him in his element that much more because there are movies where he’s clearly struggling. I also love his YouTube workout videos. The exercises are fine, but his life advice is just wonderful. My favorite is if you have a big belly to build up your chest until it gets bigger than your belly. Something like that.

Patrick: I think Day of Reckoning is a better, more ambitious, more audacious, more artistic movie, but Regeneration is more fun to watch and likely the one I’d reach for first. I know that answer is kind of a dodge, but here we are.

There’s nothing in the Universal Soldier franchise that really touches either The Terminator or T2, but there are three Universal Soldier movies I think are terrific and only two good Terminators (I like half of T3 and really like The Sarah Connor Chronicles, but I don’t know if we’re counting that here). Does that make it better?

Schwarzenegger and Van Damme are my two favorite action stars, and they both have a lot of important things in common. They’re both tremendously charismatic. They’re both interested in stretching themselves as actors. Most importantly, though, is that they both seem to really, really enjoy being movie stars. There is a sense of humor and a great sense of fun in everything they do (up to a certain point; both actors are kind of in a Sad Bastard phase as of late). They’re having so much fun on screen that it’s impossible not to have fun watching them even in something that’s otherwise not that great. Van Damme has made a lot of not-great movies, but I would watch him in anything in a heartbeat. There aren’t a ton of actors I can say that about with the same confidence.

Adam: Also opening this week in 1992 was Cool World and Prelude to a Kiss. I re-watched them and enjoyed both. It took me by complete surprise because I saw each of them on cable in 1993 and didn’t like either movie. I know Cool World isn’t good, but I was able to latch onto the Brad Pitt character as a through-line and watching it from that perspective instead of Kim Basinger or Gabriel Byrne helped. I re-listened to a bit of your podcast with Heath on the movie. You were not a fan, which I totally understand. Prelude to a Kiss really worked for me last weekend, too. It’s now in my schmoopy rotation. It’s such a bizarre premise for a romantic drama (it was sold as a romantic comedy, which might explain why I didn’t like it at first) and has good performances from Meg Ryan and especially Alec Baldwin. I was reminded of Return to Me in both its premise and Chicago neighborhood setting.

Patrick: I clearly need to see Prelude to a Kiss, which I used to want to see because it was a romance with Meg Ryan, though my desire to check it out has waned over the years. You’ve now sold me on it again. And I’m sure I would watch Cool World if it came on cable or something, because I’m incapable of learning my lesson with some movies.

Adam: That’s me with The Doors! Next week we’ll be back with a discussion of Honey, I Blew Up the Kid. See you next time!
Posted by Patrick Bromley at 5:00 AM