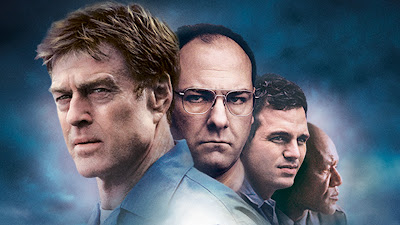 Winner for “Best Fire Stunt” at the World Stunt Awards. It beat out Apocalypse Now Redux, Planet of the Apes, The Animal and The One. I’ve seen better, I’ve seen worse.

• Best Scene/Moment: There’s a moment during the climax where Mark Ruffalo annihilates a guard tower with a helicopter’s tail rotor. It’s an amazing practical effect.

• Best Song: “Ante Up (Robbin Hoodz’ Theory) by M.O.P. It plays near the beginning of the movie when we’re introduced to the rough & tumble prison inmates with a rough & tumble song!

• Best Merch Available on eBay Right Now: Literally nothing unless you want a poster or a press kit. Ugh!

• Director Check: The Last Castle was directed by Rod Lurie who, to my surprise, is a director I’m a bigger fan of than I initially thought. Looking at his filmography, I do like The Contender, The Last Castle, Resurrecting the Champ, and Nothing but the Truth. His output of the last decade was a mix of theatrical features and television movies, including a Straw Dogs remake (which I’ve not seen) and 2020’s The Outpost which also was surprisingly good. 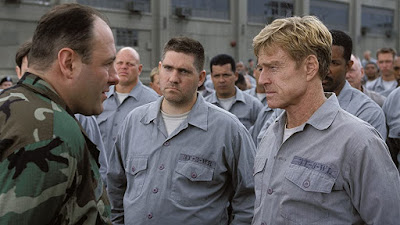 • Year 2001 Movies to Trailer Before It: 3000 Miles to Graceland, Behind Enemy Lines, The Score

• Mall Movie? No. Robert Redford has probably never been to a mall so his movies can’t play there.

• Scene Stealer (tie): Mark Ruffalo back when he was an interesting and exciting newcomer and Steve Burton, who plays a Captain that’s second-in-command to James Gandolfini’s malevolent Colonel. He just seems like a dependable dude. I’m surprised he wasn’t in more movies after this.

• I Miss: James Gandolfini. He’s great in the movie playing a dark, vindictive character who’s even worse because he thinks he’s genial and fair. 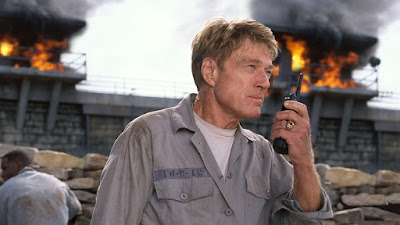 • What I Thought in 2001: I saw this at the student union when I was in college and I couldn’t recollect what I thought of the movie. I’ve wanted to rewatch it for 20 years so that has to say something, right?

• What I Think in 2021: Its eye rolling and corny at times, but The Last Castle is a fun watch overall and a good pick for either Vigilante or Free Space Day this Junesploitation. The film features strong performances from Gandolfini and Ruffalo, a terrific action climax with heaps of prison mayhem, and all the split diopter shots money can buy.
Posted by Patrick Bromley at 12:00 PM