It Came from the '80s: THE BARBARIANS 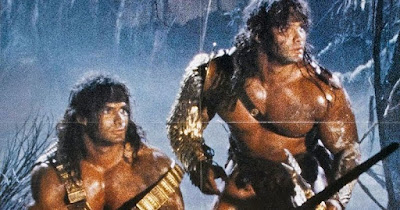 Because Conan the Barbarian was a big hit in 1982, the rest of the 1980s saw a whole bunch of pretenders to the throne -- cheap knock-offs of the Real Deal, some of which have gone on to achieve classic status themselves (like The Beastmaster) and others which remain relegated to the status of cheap knock-offs (Yor: The Hunter from the Future, the Deathstalker films). It's not surprising that my beloved Cannon Films would get in on the act, but it is a little surprising that they would still be producing Conan rip-offs all the way into 1987, when the rest of the film industry had, with few exceptions, all but abandoned fantasy as a viable genre. Having had some modest success casting bodybuilder Lou Ferrigno in their previous fantasy effort Hercules, Cannon decided to double their chances with the casting of twin bodybuilders David and Peter Paul -- aka "The Barbarian Brothers" -- in 1987's The Barbarians.

The brothers play Kutchek and Gore, twins who, as young boys, traveled with a band of entertainers known as the Ragnicks. The Ragnicks are attacked one day by evil Kadar (Richard Lynch), who kidnaps their queen Canary (Virginia Bryant) in the hopes of possessing her magical ruby. Canary hides the ruby just in time but is taken by Kadar, while Kutchek and Gore are separated. Raised as slaves and warriors, the boys are reunited as adults when they are pitted against one another in battle. Discovering they are long lost brothers, Kutchek and Gore escape and reunite with the Ragnicks, promising to recover the ruby and rescue Canary. With the help of a thief named Ismena (Eva La Rue), the brothers embark on a quest wherein they battle monsters, a dragon, and, of course, the evil Kadar. That guy's a dick. 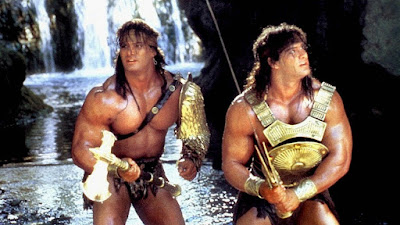 The key to appreciating The Barbarians is right there in the casting of its titular leads. Professional bodybuilders and wannabe actors David and Peter Paul weren't movie stars at the time of The Barbarians, though they had been trying to break into the business for several years. They come off, to put it gently, as lunkheads, but lunkheads in the best possible way in that they are totally in on the joke. Their herniated goose laugh is all the evidence needed that the Brothers know exactly what movie they're in and exactly how to play to their strengths as limited performers. They're dim but good-natured, which makes even their brotherly bickering tolerable. More importantly, they fit the parts to a super buff T: with their long hair, impressive builds, and tiny loincloths, the Barbarian Brothers look like they stepped right out of a Frank Frazetta painting. I haven't seen their other big screen pairings (movies like Think Big and Double Trouble), but on the basis of their goofy charm in The Barbarians, I'd be more than willing to check them out.
Movies like The Barbarians are pretty much made for me, as this one is full of stuff I love: it's a cheap '80s fantasy produced by Cannon Films and directed by the great Ruggero Deodato. It's got sword fights and gratuitous bloodshed and rubber monsters, including an enormous dragon (that unfortunately eats some of the main characters completely offscreen). It's got a pulsing electronic score by Pino Donaggio. It's got supporting roles for Richard Lynch and Michael Berryman and George Eastman. It's schlock to be sure, but it's well-made schlock. Cannon spent about $2.5 million on the production, but the money went a long way when it comes to the costumes and production design. 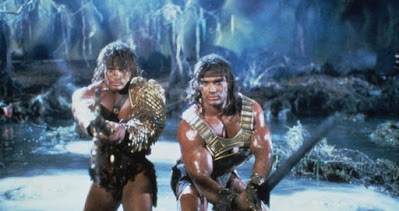 More importantly, though, is that they hired Deodato to direct. Because he's best known for making Cannibal Holocaust, Deodato is too often dismissed as a one-hit wonder or as the madman who endangered his cast and crew and was brought up on charges to prove that his film was, in fact, fiction. What gets ignored as that Deodato is a very good filmmaker -- arguably one of the best of his class of Italian filmmakers of the 1970s and '80s. One needs look no further than the opening 10 or 15 minutes of The Barbarians as proof, in which he stages a chase sequence and moving battle scene worthy of Stagecoach. It's an incredible action set piece, and though he never tops it, Deodato keeps the tone light and the energy up for the remainder of the film, ensuring there are stakes amidst the silliness and avoiding much of the genre's usual pretense. He seems like an odd fit for the material until you see the movie and realize he's exactly the right guy. 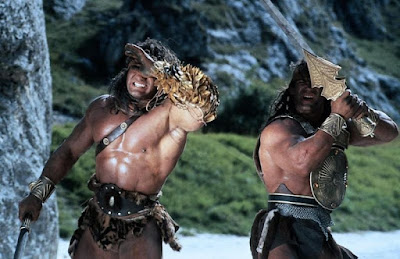 After a limited release and its VHS/cable TV run in the late '80s, The Barbarians was hard to see outside of bootleg copies for a number of years until Shout! Factory put it out on a DVD double feature in 2013. I'm glad it's more readily available thanks to the Blu-ray from Scorpion and Kino released late last year, because it's a movie I'd love for more people to discover. As Conan rip-offs go, it's one of the better ones despite being late to the party. I suspect that's because the Barbarian Brothers bring their own personalities to the screen and create an identity separate from "imitation Arnold," which was the approach taken by some of the movie's predecessors. It's a perfect fit for #Junesploitation's Sword and Sorcery day because, unlike some other low-budget offerings in the same genre, it doesn't demand that you make you own fun. The Barbarians is plenty fun on its own.
Posted by Patrick Bromley at 5:00 AM