by Adam Riske and rob DiCristino 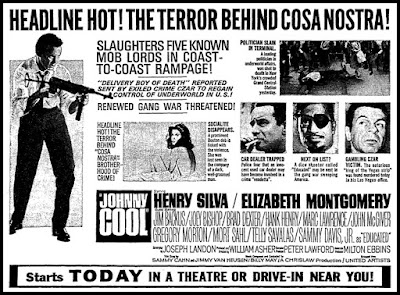 Rob: Happy Junesploitation, everyone! Our first entry of the month celebrates the great Henry Silva in 1963’s Johnny Cool. Directed by William Asher, the thriller stars Silva as Salvatore Giordano, a young Sicilian chieftain whose generosity has made him a folk hero. After surviving an assassination attempt, Giordano is recruited by Johnny Colini (Marc Lawrence), an aging gangster living in exile from America. After grooming Giordano in the ways of civilized business and dubbing him the new “Johnny Cool,” Colini sends his apprentice to his old stomping grounds in order to take revenge on those who have wronged him. Giordano -- We should stick with his real name for the purposes of clarity -- arrives in great style, quickly impressing the beautiful Dare Guinness (Bewitched’s Elizabeth Montgomery) and making enemies of mafiosos headed up by Don Vincenzo Santangelo (Telly Savalas). When Giordano learns that he’s being double-crossed, however, he decides to drop the borrowed moniker and carve out his own violent legacy. 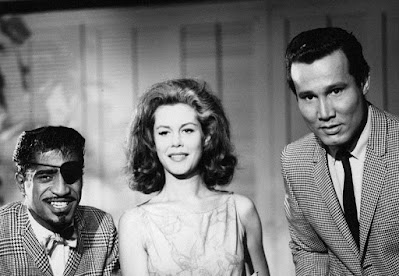 Johnny Cool is a top-notch gangster adventure. Henry Silva has that great seedy, enigmatic charm, and Elizabeth Montgomery’s Fiery Dame Energy makes her his ideal partner in crime. Their early scenes are packed with innuendos and sing-song rhythm (The film is based on the novel by John McPartland and has an appropriately literary feel), and Montgomery’s reckoning with their tortured romance makes for some of Johnny Cool’s best moments. Plus, it’s kind of awesome that her name is “Dare,” isn’t it? Anyway, Telly Savalas and Marc Lawrence make for wonderfully slimy head honchos, and there’s even a fun cameo from an eye-patched Sammy Davis, Jr. (who also sings the theme song). Joseph Landon’s screenplay is tight and muscular while making room for occasional humor, and Asher (married to Montgomery at the time) builds tension and drama through some creative visual flourishes. It’s a good picture!

What did you think of Johnny Cool, Adam?
Adam: Overall, I enjoyed the movie but found parts of it frustrating. On the positive side, Henry Silva has a peculiar screen presence (in a good “can’t take your eyes off him” way) and it was nice seeing him in his prime for the first time after only knowing him in smaller parts of more recent movies like Above the Law, Dick Tracy, and Ghost Dog: The Way of the Samurai. I get it now in a way I didn’t before. He seems devilish like Andrew Divoff when he plays Nathaniel Demerest in Wishmaster. Henry Silva should have been a Djinn is what I’m trying to say. I also really liked Elizabeth Montgomery, too, especially in the final stretch of the movie. She makes a very moral, honest choice in the closing moments that I applaud the filmmakers for including (they may have been forced to since this was made in the early '60s) because it’s a choice a “normal” (not underworld) character would make. But it’s also deeply fucked up in a way you take with you after the movie. Montgomery reminded me a bit of both Ann-Margaret and Nicole Kidman (no wonder she’s in the Bewitched movie!) at times, so I’m in love with her is what I’m trying to say. There’s also a lot of fun, diverting little character bits and asides that made the movie more enjoyable like the pool scene where you see an endless riser for the diving board. I’ve never seen that before! Or Joey Bishop shooting a used car commercial for no reason. I wanted to see more takes! Johnny Cool is all over the place and that’s the source of some of its charm. This felt very much like an askew crime movie Steven Soderbergh would’ve directed if he made movies in the 1960s.

Rob: That’s a great way to look at it! 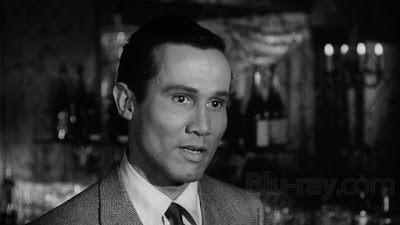 Adam: On the other hand, I was pretty confused at times because the movie is so loose in its storytelling. There are scenes where six characters appear and four of them serve little purpose. There are other scenes where someone is really important but only for one scene. This might work better if you’re familiar with the history of all the actors and the baggage they bring to the movie, but since I am removed from the time it was made (and probably didn’t do my homework enough), I only recognized a few of them like Telly Savalas, Sammy Davis Jr., and Elisha Cook Jr. I wish the film had a narration device to wrangle the plot threads and character introductions. By the chilling end, I felt like the movie was relatively easy to follow but was unnecessarily confusing along the way, where better editing or writing could have helped. To use a sports analogy, this is a good offense in need of a real point guard.

Have you seen a lot of Henry Silva movies going into Johnny Cool?

Rob: I’d seen Ocean’s 11, Sharky’s Machine, and The Manchurian Candidate, but I know very little of his modern work. I think he’s really great, though, and I look forward to checking out more of his stuff.

I agree with you that the roving cast of cops and mobsters that pursue Giordano gets a little hard to wrangle, but for me, it almost added to his mystique; His influence (and that of the mob itself) is incredibly wide-ranging. I definitely see the critique from a storytelling perspective, though. 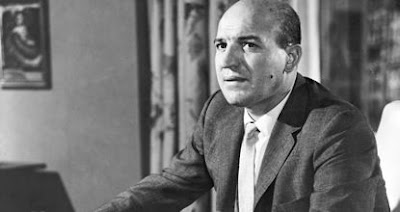 One thing I really liked was the futile way in which “Johnny Cool” tries to transition to “Giordano” and does his best to make the name evoke fear or awe in the same way the other one does. That it can’t is a nice commentary on reputation, legacy, and how fleeting this lifestyle can be. In the end, no matter what he calls himself, he’s just a kid from the hills of Sicily.

Anything else on Johnny Cool?

Adam: All good here. I recommend the movie despite my criticisms. Next week we’ll be back celebrating Scott Adkins Day with Wolf Warrior. Until next time…