The Legacy of THE SHADOW 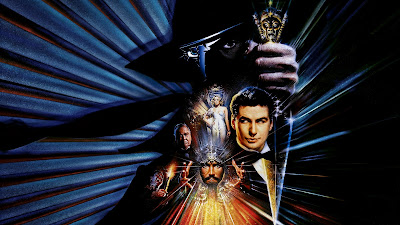 The debate between what is the first superhero usually is over two characters: The Phantom and The Shadow. Most comic aficionados point toward The Phantom because of the way it was drawn and its popularity in comic strips. However ,what is not up for debate is that The Shadow predates them all.
We are so far removed from the golden years of The Shadow that most of us don’t know how incredibly popular The Shadow was. It’s not exactly certain what the first appearance of The Shadow was in popular culture, but we do know that it was between 1929 and 1931 with a weekly radio show and a monthly pulp magazine called The Shadow Magazine. From 1931 to 1958, The Shadow starred in six movies, a 20-part serial, 667 radio shows, and 325 magazine issues (that, on a more personal note, have absolutely amazing covers painted and illustrated by George Rozen and Graves Gladney). A pulp hero donning a black fedora, cloak, red scarf, and a pair of .45 caliber pistols, The Shadow solved crimes, fought bad guys, and had a globetrotting ultra-rich alter ego. Knowing this, it is probably not a surprise that The Shadow's most lasting legacy for comic nerds everywhere was influencing a little character called Batman. Yes, Bob Kane said that The Shadow was a direct influence on Batman and Batman’s first story from Detective Comics #27, “The Case of the Chemical Syndicate” is almost a direct copy of The Shadow story, “Partners of Peril” from 1936. The relationship between the two characters is so obvious that, after DC Comics acquired the rights to The Shadow in 1973, to promote his own book they did a one-issue crossover in which Batman acknowledges The Shadow’s influence. 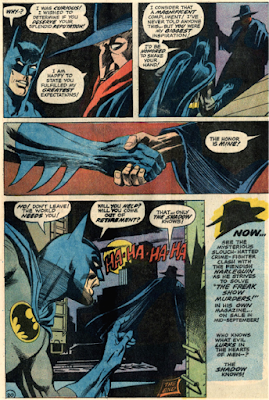 So it’s an odd twist between these two characters that 1994’s The Shadow was greenlit and influenced by the success of the Tim Burton Batman movies. From the score to the way it’s shot, The Shadow is very obviously influenced by the Burton film, however it adds a bit more Film Noir with the seediness of 1930’s New York. Playing the lead is Alec Baldwin, who is fine as The Shadow but is at his best as The Shadow’s alter ego Lamont Cranston. More than other movies, having Baldwin pull off the role as Cranston is is so important because one of The Shadow’s powers is to turn invisible (actually to cloud men’s minds, but that’s semantics for nerds), so Baldwin isn’t really on screen very much as The Shadow and spends most of his time as Cranston. Cranston is a slightly more gentlemanly and more macabre version of Bruce Wayne, who is given ridiculous things to say that Baldwin pulls off. In one scene, Margo Lane, (played by my nomination for “Why weren’t they a bigger star” Penelope Anne Miller) says “I’m not afraid of you.” To which Baldwin replies “But I am.” Coming out of so many other actor’s mouths, that line would have been comical, but Baldwin destroys it. 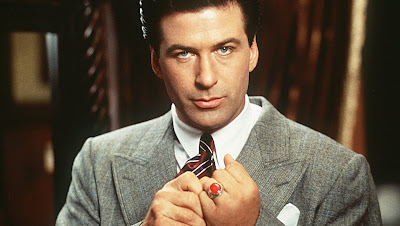 If you’re a fan of Film Noir, you’re probably going to like a lot of the visual tone and cinematic feel of the movie. Handling the cinematography is Stephen Burum, whose long career includes The Untouchables, which fits perfectly with the same period and tone The Shadow is trying to convey. With most of the movie clearly being shot on a set, it gives it an “old Hollywood” feel and together with more modern special effects creates some genuinely awesome imagery that were made to be iconic and fit into a three second shot in a trailer. Being released in 1994, The Shadow is an interesting time capsule of that weird time in movies where stop motion had reached its pinnacle and CGI was still in its infancy. Not only does The Shadow push a cinematic tone of the 1930s, but also pushes the feeling of a pulp serial or magazine, where the plot builds then finds the hero in trouble, resolution, another build, all while chasing the same plot point. I almost wish director Russell Mulcahy would have doubled down on this, editing the movie like Grindhouse with breaks, 1930s advertisements and a or a voiceover meant to leave the audience hanging for the “next episode.” I know this seems like something that would be too daring for a 1994 movie, but there are moments where The Shadow is very self aware of what it is. At one point, after Margo tells Cranston she had a wonderful dream where she was lying naked on the beach, the always dark Cranston tells her he had a dream where he was pulling off his own face. The scene is played for humor, but also to point out the awkwardness of what it would be like to date someone like The Shadow. The henchmen of Khan walk around New York in full ancient Mongolian armor, it is too obvious to not be a mistake but to point out the awkwardness of some of the 1930s pulps.

The Shadow is not a perfect movie and there is a reason it wasn’t the hit the studio had hoped it would be. My biggest detraction from the movie is that it misses a very important aspect of storytelling, and that it never sets the rules for the universe it is creating. The example I’ll use is Spider-Man. Even if you’ve never seen a Spider-Man movie, they take time to explain the rules of his powers so as an audience we begin to understand what he can or can’t do. The Shadow relies on previous knowledge of the character and never really explains how he got the powers, how he uses them, or what may be weaknesses to those powers. Viewing The Shadow from now nearly 30 years later, probably my biggest problem with the movie is that I would have re-edited the movie. It’s very linear in the narrative. One of the best scenes in the movie is one where The Shadow attacks a group of gangsters on a bridge. This should have been the opening scene. It’s fantastic. Instead, the movie actually opens with a weird opium den and a monk who it is never really explained who he is or why he’s important and could easily have been inserted as flashbacks. 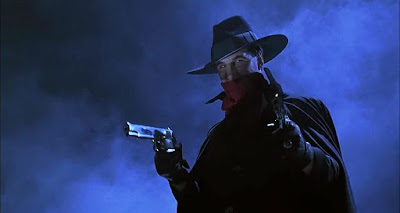 I can appreciate a movie that doesn’t treat its audience like idiots, and doesn’t need to explain everything about the character, but when the antagonist directly uses the characters past and powers against them, those things should probably be explained better. Besides the editing issues, the movie has a villain problem. Shiwan Khan’s motivations never feel real, and much like 1990’s Dick Tracy, Mulcahy seems so wrapped up in a genre that the movie doesn’t pace for a 1994 audience. Right after Sam Raimi put out two successful Spider-Man movies, his next project was slated to be another The Shadow movie that he would co-write with Michael Uslan, who wrote much of The Shadow comic in the '70s. I wish this would have happened because I want to see this character succeed. The Shadow is one of the most important fictional characters in American history and in a world where we seem to get a “re-boot” of Spider-Man or Batman every few years, I think the character who influenced all of them deserves another shot.
Posted by Patrick Bromley at 12:00 PM