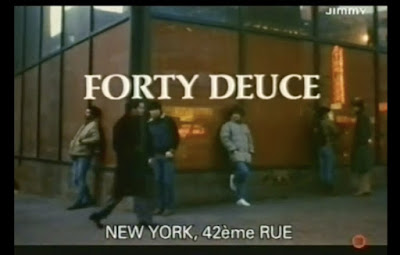 A sad and sleazy slice of life.

If you've read me in the past or listened to me on a podcast, you know that I long to live in the Deuce era of New York City. The 1970s: where the streets were full of hustlers, porno theaters and grindhouses had barkers out front pulling in unsuspecting tourists to the latest sleaze show, and the marquees were full of titles I could only dream of seeing on opening weekend on the big screen. It's the 42nd Street of Midnight Cowboy, Taxi Driver, and Manhattan. In Bill Landis's Sleazoid Express, a beautifully horrific picture is painted of this time. Landis also paints an ugly portrait of the period of decline on the Deuce that began in the early/mid '80s. Heroin came into the picture, AIDS was killing off thousands, and the city started kicking everybody out and turning all those iconic theaters and buildings into unaffordable living spaces. Gentrification became the dirtiest word in Manhattan. But the period of the late '60s and early '70s Midtown? I dream of that place weekly.

Paul Morrissey's Forty Deuce, like Landis's Sleazoid, gives you the idea of what life was really like on the Deuce in the early '80s. It wasn't “Fun City” anymore, the nickname snidely uttered by residents after Mayor John Lindsay said he thought New York was still a “fun city” in an interview during the 1966 transit strike. I've always wanted to live in “Fun City.” But I've had literal nightmares about the Forty Deuce era (era) of Times Square. The year Forty Deuce comes out is the beginning of the scummiest period and decline of the Deuce of my dreams. 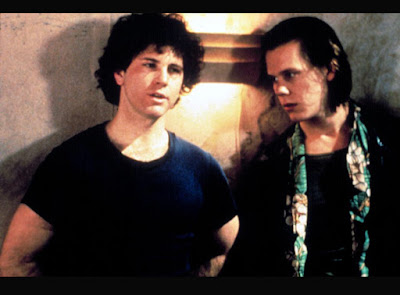 Coming after Morrissey's days with Andy Warhol and The Factory, Forty Deuce is based on the play of the same name by Alan Bowne (who is also credited for the screenplay, although I doubt a new script was written for the film). While the film follows the exploits of a group of hustlers and their “manager” throughout Midtown Manhattan, it's essentially a chamber piece. It opens was photography of the rundown area formerly known as the Deuce (42nd Street between 7th and 8th Avenues) and its surrounding neighborhood to a fun reggae song performed by Camaroonian musician Manu Dibango. We see Augie, the “manager” (read: pimp), enter a dingy studio apartment to find a 12-year-old boy passed out on the bed. He goes out to find who's responsible and gathers his crew of hustlers comprised of Ricky (Kevin Bacon), Crank, and Mitchell (Esai Morales in his first film credit). As it turns out, another member of their group, Blow, is the one responsible. Blow, it seems, had taken the heroin Augie gave him to sell, cut it down with Drano essentially, and brought back the child to turn tricks. When everyone regroups in the communal sex pad, they discover the kid is “cacked;” dead. Augie's pissed, and now these young men have to sell the rest of the heroin and figure out what to do with the dead kid.

Like most of Morrissey's films, it's cheap and dirty and you may need subtitles to understand these hustlers and their strong New Yawk-ese. Bacon, as usual, is fabulous as a burned out, twitchy junkie who, in the same year, plays a completely different type of character in a completely different type of movie, Diner. Morrissey's photography and knowledge of his adopted home of the Deuce gives the feeling of a documentary. The handheld camera strolls past a line of hustlers looking to make a fast buck: “Coke. Speed. Cock,” they say on repeat. As is usually the case in movies taking place in Times Square in the '70s and '80s, the marquees are prominent. Here we see on display showtimes for Superman II, The Starlets, Games Women Play, Practice Makes Perfect, and Cheech and Chong's Nice Dreams. 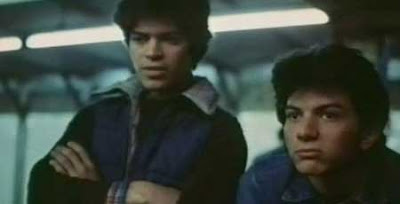 It may sound like Forty Deuce is a real downer of a movie. Don't get me wrong, it's dark. But it's also quite funny. Our four main hustlers make up your stereotypical group of friends. Blow is the cocky leader; Ricky is the second-in-command coming off a bad trip; Mitchell is the cool-as-a-cucumber smooth-talker; Crank is pipsqueak. Morales, even though featured in a less-than-reputable film (some might say), shows what a charismatic star he would later be. Bacon can do no wrong in my eyes, and exudes some of the most palpable nervous energy I've ever seen on screen. And there's plenty of levity with the character of Crank. These four guys never leave Midtown. When they initially have to go to Queens to make a drug deal the three others are explain to Crank where to go and which trains to take. Crank gets so confused and eventually starts panicking and crying. It's an unexpected moment of hilarity in an otherwise grungy film.

The final act is basically a filmed version of the play. Morrissey decides to take a split screen approach while the final 20 minutes are played out entirely in the tiny apartment. He shoots the final act with two cameras – one set up as a close shot and the other a medium. The blocking of the actors passing from one side of the screen to the other is seamless and really shows how brilliant Morrissey really is. The group of hustlers finally devise a plan to handle the dead body by inviting a previous client, Mr. Roper (a pedophile), up to have his way with the boy. Blow and Ricky will give Roper some of the Drano-spiked heroin to smoke, and he'll pass out. When he wakes up everyone will say he killed the kid. As the final moments take place, we're treated to seat-shifting tension where Ricky slowly becomes unhinged as his patience runs out with Roper. Finally, we're blessed with one of the greatest monologues I have ever seen on stage or screen by Roper as played by Orson Bean.

I won't say Forty Deuce is a must-watch. This type of movie is definitely not for everyone. This movie is definitely for lovers of theatre and lovers of the Deuce, though. I suppose it only adds to its filthy charm that the only way to watch this film is on a shoddy VHS rip with French subtitles on YouTube. Nevertheless, it shows a piece of history many New Yorkers would soon just forget.
Posted by Patrick Bromley at 5:00 AM