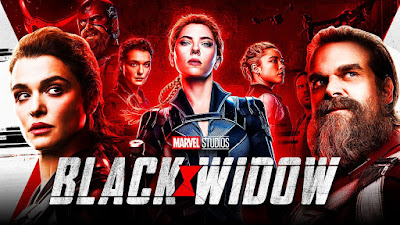 The long-delayed solo adventure is a welcome remedy for Marvel Fatigue.

General MCU spoilers ahead, I guess?

It’s almost hard to believe that Cate Shortland’s Black Widow was originally slated for release in May of 2020. That was a very different world, one in which Marvel Cinematic Universe fans were still reeling from the game-changing fallout of Avengers: Endgame. Many of our favorite characters had just been retired, and most of their major story arcs had just been resolved. There was a sense of finality, of closure. We weren’t sure what the next phase would look like or, honestly, if we even wanted one. Spider-Man: Far From Home was a sloppy attempt at epilogue that tried to bridge the gap between eras (eras) to mixed effect. WandaVision — which, for all its shortcomings, did challenge its audience with new and interesting styles of storytelling — was almost a year away. Had Black Widow been released in the interim as intended, it might have felt like a cynical play on our affections for a character we’d just lost. It might have felt calculated and insincere, falling through the cracks as an “also ran” entry in the wider series. 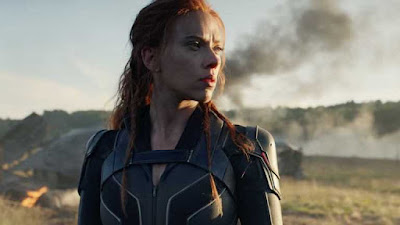 Many reviewers will disagree with me. You’re likely to read pieces proclaiming that Black Widow “offers no closure for the character” or “was doomed to irrelevance by its delayed release.” But this is not a movie about confronting our end. Instead, it’s about reckoning with the circumstances of our beginning. For super-spy/Avenger Natasha Romanoff (Scarlett Johansson), that’s mid-’90s Ohio, where she once posed as a typical American family alongside three other Soviet spies: Alexei (David Harbour), Melina (Rachel Weisz), and Yelena (Florence Pugh). When their cover is blown, the family is disassembled and the girls are sent to General Dreykov’s (Ray Winstone) Red Room, a KGB reconditioning camp where children are molded into merciless assassins called Widows. Decades later — between the events of Captain America: Civil War and Avengers: Infinity War, for those keeping score — the rogue Natasha reassembles her “family” in order to destroy Dreykov and free the girls still under his thrall.

Her first reunion is with Yelena, whose callow girlhood has given way to cold-blooded ruthlessness. Yelena is who Natasha would have become had she never met the Avengers: Brutally violent, task-obsessed, and socially inert. Throughout their great early scenes, the “sisters” reveal how their shared trauma has shaped their worldviews. Whereas Natasha grew warmer as part of a family of her choosing, Yelena’s damage stems from her inability to trust that any new attempts at kinship won’t end the same way her first one did. Next is Alexei, now rotting in Siberian prison. We soon learn that he was once the Red Guardian, the Soviets’ one and only attempt at a Captain America-esque supersoldier. Back in his old costume and ready to relive his glory days, he helps his girls recruit Melina, whose allegiances — for spoilery reasons — remain a bit murky. As the reunited family stages an epic assault on Dreykov and his brainwashed troops, they learn that real intimacy and companionship are born of trust and resilience, a willingness to be vulnerable to feelings that they long-since believed were beyond their reach. 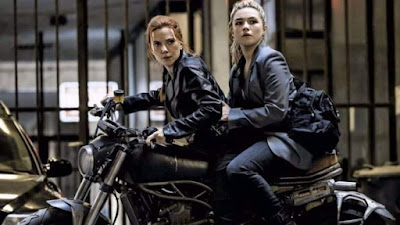 In a move that feels almost revolutionary for a studio with such a firm grasp on its filmmakers, director Cate Shortland (Berlin Syndrome, Lore) is allowed to inject Black Widow with a real authorial flair. There’s a nice verite style at play here, one that compares favorably to the herky-jerky incoherence of the Russo Brothers. Action scenes are staged with geography and continuity in mind. Important emotional scenes are allowed to play out in long takes, giving each actor a chance to actually play off the rhythms of their partners. Mood and tone are often crafted through blocking and lens sizes. Our attention is drawn from one place to another with shifts in camera focus. Remember stuff like this? We’re not taking French New Wave here, but it’s notable for a series notorious for stitching together performances from actors filmed against greenscreen backgrounds on different continents. There’s even an actual opening credits sequence (set to a moody rendition of “Smells Like Teen Spirit”). When was the last time we got one of those? Guardians of the Galaxy Vol. 2?

We’re also in “interquel” territory for — and correct me if I’m wrong -- the first time in the MCU. This is a solo Black Widow movie, but not really a chronological Black Widow origin movie. This means that Scarlett Johansson can retain most of the character she’s developed over this ten-year span and not have to worry about crossing any thresholds or refusing any calls to adventure. This is the Natasha we know and love simply conducting a little side quest in the downtime between global apocalypses. However, Johansson — who can play this role in her sleep — never overwhelms the ensemble. This is a team movie, and the team has great chemistry. David Harbour wields his big, burly dad bod like a vibranium shield. Rachel Weisz’s enigmatic steeliness evokes a mom caught between love and duty. The real star, though, is Florence Pugh. She’s straight-up stealing scenes K-Stew-style in this one, folks, giving her Yelena an awkward, insecure defiance that will earn her our affections for adventures to come. And, as Black Widow’s post-credits stinger assures us, there will be adventures to come. 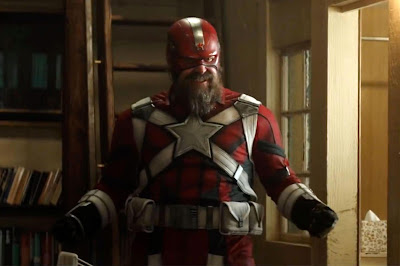 For all Black Widow’s successes, though, many will argue that Natasha doesn’t have enough screen time or that she deserved a more substantial adventure after her ignominious send-off in Endgame. That’s fair. Others will argue that the movie simply isn’t epic enough to warrant inclusion in the Defining Cinematic Saga of Our Age. And it probably isn’t! It’s pretty slight, honestly. It’s a smaller, moodier, character piece that fills in a few minor continuity beats between movies that are (*gasp*) more than five years old. It shares some DNA with Captain America: The Winter Soldier, but it never reaches for that movie’s grandiose action or MCU worldbuilding. What it does do, however, is give us a bit of insight into why the fiercely-independent super-spy Natasha Romanoff eventually makes the ultimate sacrifice for her family. And that’s enough, I think. Now that we’ve saved galaxies and altered the timeline of the larger Multiverse, it’s a bit refreshing to have a Marvel adventure on Black Widow’s smaller scale. And honestly, who’s to say we can’t have more?
Posted by Patrick Bromley at 5:00 AM