This week we take a deep dive into silent movie esoterica.

I have been intrigued with the early, silent Foxy Grandpa films (1902-1904) since first reading about them in Gerald Mast’s seminal book, The Comic Mind: Comedy and the Movies. Here is Mast’s description of a typical title in the series, Foxy Grandpa Shows the Boys a Trick or Two with the Tramp: “Foxy accosts a tramp sleeping on a bench, fights him, and drives him offscreen. The title is almost longer than the film (it is certainly more interesting).” 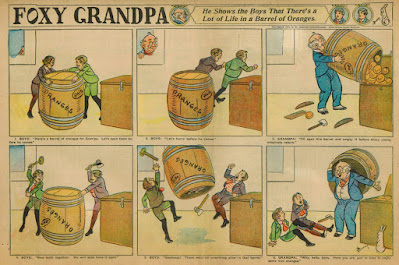 I wished then, and still wish today, that American films were not so tied to short, punchy titles and could take a cue from these early masterworks with crazy long, descriptive titles like Foxy Grandpa Tells the Boys a Funny Story; Foxy Grandpa and Polly in a Little Hilarity; and The Boys Think They Have One on Foxy Grandpa, but He Fools Them. Few of these films still exist. Courtesy of the Library of Congress, you can see the last one on the YouTube machine.
It was only while researching this column that I fell down the “Foxy Grandpa” rabbit hole. (Indeed, one of these primitive shorts could very well have been called Foxy Grandpa Falls Down the Rabbit Hole with the Boys.) Foxy Grandpa actually had a literary origin, starting life as a daily comic strip by cartoonist Carl E. Schultze. It was hugely popular and spun off both stage and screen adaptations and a party game. The comic strips were later collected in book form, which ran to more than thirty volumes. In 1923, a Foxy Grandpa radio program began broadcasting.

That’s a lot of Foxy Grandpa. 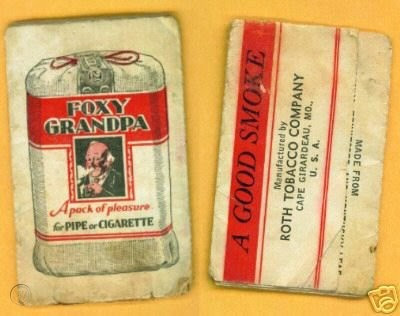 The comic strips are the essence of simplicity. Foxy Grandpa’s two mischievous grandsons, Chub and Bunt, try to trick him, but Foxy Grandpa always manages to put one over on them. NOTE TO SELF: I am planning to start a campaign to return “Chub” and “Bunt” to the list of most popular boy’s names in the US. Take that, “CAYDEN”! 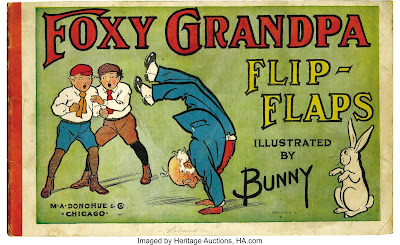 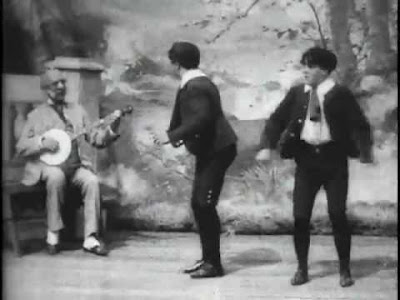 I realize that the ultimate Foxy Grandpa boxset in my head may never become a reality, but a man can dream. Can’t he? If, gentle reader, your own research into this fascinating subject happens to unearth STILL MORE Foxy Grandpa titles, please list them in the comments section below?
Posted by Patrick Bromley at 5:00 AM