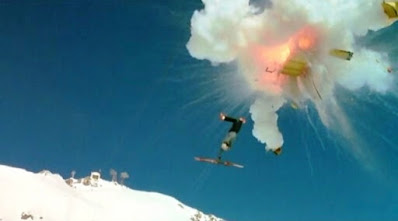 They don't make 'em like they used to.
Overused, yes, but I think it actually applies here. When watching a James Glickenhaus movie, those words, flashing in bright lights, are in your head throughout the entire movie. Having only seen three of his films thus far (The Soldier, The Protector, and Shakedown) with four more at the top of my watchlist, I can safely say Glickenhaus is one of my favorite directors. Confident, fearless, and a take-no-shit attitude of filmmaking, he got out of the business when he couldn't make his types of movies any more.

The opening credits of The Soldier are laid over a flashing propaganda reel – words like “HALT” and “DEMOCRACY” mixed with images of Fidel Castro, Richard Nixon, soldiers, warplanes, and militaristic violence from around the world. That's followed by a woman pushing a baby carriage across the street in Philadelphia where she is graphically run over by a Swedish diplomatic limousine, followed by a crowd of people rushing to her aid. Those people are then mowed down in a hail of gunfire by a team of black-clad men with uzis. A helicopter comes down out of nowhere, the men load the dead bodies up, Ken Wahl sprays the blood off the street, and the helicopter takes off. This is literally the first minute and a half of the movie. This is James Glickenhaus. 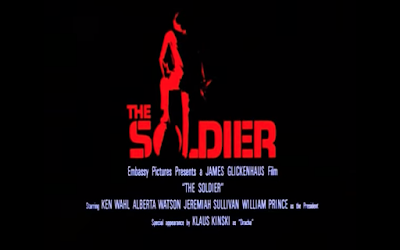 We learn this team of men are a covert operation of the CIA led by a man only known as “The Soldier” (Wahl, who looks like if Tom Cruise and Peter Gallagher had a baby). Members of the KGB have stolen a shipment of plutonium and are threatening to blow up 50% of the world's oil supply in a Saudi oilfield. The Soldier's mission is simple: stop the Russian terrorists, maybe have sex with an Israeli spy along the way, and most importantly, save the oil. Glickenhaus!

You want explosions? We got it! When the plutonium is stolen, we see the extreme precautions the military has taken to protect it by encasing the small tube in a multi-ton concrete shell being hauled on a semi truck surrounded by army jeeps with machine gunners in the back. Armed with a bazooka, the terrorists blow up the semi (that's one), drive down to the panicked caravan, kill the rest of the soldiers by blowing up their jeeps (that's two), carefully pull out the plutonium, shoot a responding officer, and carelessly toss the nuclear fuel in the trunk of their sedan before driving to Canada where they will fly to the middle east. But not before blowing up the same cars and semi one more time (that's three). By the time they drive away I can't figure out what the film crew is blowing up. It doesn't matter, though. Glickenhaus! 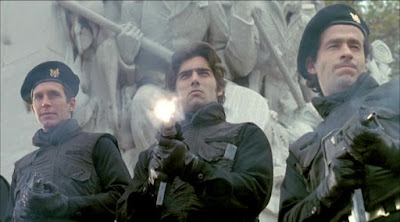 You want skiing in Austria? We got it! Klaus Kinski plays a known terrorist called Dracha. He says maybe a dozen words and is in the film for all of three minutes while wearing the absolute tightest white ski pants I've ever seen in my life (Hello, Kinski peen!). The Soldier tracks Dracha down during a ski vacation in the Austrain Alps. Dracha traps him in a ski lift tram (a la Nighthawks), a henchman armed with a bazooka blows it up, The Soldier jumps, straps on the skis and heads down the mountain while being chased by the aforementioned henchmen. In pure Glickenhaus fashion, The Soldier goes off a jump, and while doing a 360 spin, pulls an uzi out of his jacket and shoots the incoming henchmen. It's only right to pump your fist in the air and shout, “Glickenhaus!”

You want mud wrestling? We got it! After his boss is blown up, The Soldier reconvenes the team. Two of them – one black, one white – are found in a country western bar in a scene that rivals that of a similar scene in 48 Hrs. And after simultaneously hijacking a nuclear missile silo in Kansas (“Sky Blue Ice Dawn” is the code to get you in, btw) and leading the West German army in a fabulous car chase through Berlin, we're treated to one more moment of pure, uncut Glickenhaus where The Soldier and his Israeli goddess jump the Berlin Wall with their car. Glickenhaus! 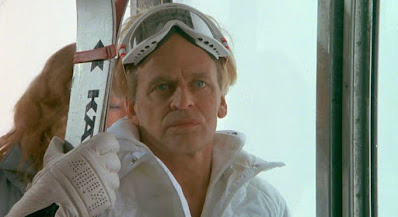 My wife would rather gnaw on a dirty shoe than watch exploitation movies, but half paying attention to what was going on on screen she said something about all the different locations and how movies today never do that anymore; it's all CGI. After crying tears of joy while kissing her feet and yet again realizing what a lucky guy I am, I knew she was right. Glickenhaus shot in no less than a dozen different locations around the world for this one 90- minute movie. I couldn't tell you the last movie I saw released in the past 10 years that did that besides a documentary. From a movie-within-a-movie scene shot on 42nd Street (with TheExterminator prominently displayed on a marquee), to the Austrian Alps, to Saudi Arabia, to Germany, to Niagara Falls, to god knows where else, The Soldier is an epic travelogue on top of being one of the most daring and exciting action films ever made. The actors may be stuffy, the final credits may roll over a static shot of the Statue of Liberty, and the moral of the story may tell us oil is all that matters, but it doesn't matter. Glickenhaus!
Posted by Patrick Bromley at 12:00 PM