Ladies Behind the Lens: PLAN B

I’m turning 40 in a month, so my ability to relate to teenage movie characters theoretically diminishes by a magnitude of a million by the day.
Nonetheless, I’m drawn to movies—especially comedies—about teens. Maybe I miss the days that my customized license plate on my 1989 Ford Probe read “HYPER 1” and that was an accurate description of me. Maybe I’ve conveniently forgotten how aesthetically challenged my hair and fashion sense were at the time. One thing I do remember is the feeling that the world was overflowing with potential for excitement and fun and romance and the chance to be this fascinating, unique person if only I could get out of my parents’ sight long enough to find out.

The characters in Plan B, directed by Natalie Morales and written by real life childhood besties Prathi Srinivasan and Josh Levy, are feeling a little smothered by their well-meaning but overprotective parents when the movie starts. Sunny (Kuhoo Verma) wants to be the “good girl” her mom insists she is, but she’s got lust for life (and the male body featured in her anatomy textbook) that doesn’t quite fit that squeaky clean image her mom sees. Sunny’s best friend Lupe (Victoria Moroles) vapes in her neon-strobing bedroom, sends a booty pic to a new online friend, and then gets a lecture from her pastor dad at the breakfast table about wearing black lipstick and having “skunk hair.” 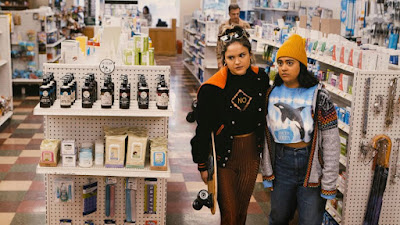 The girls have believably hilarious, earnest, blush-inducing conversations at school. “Look how many squirt emojis my butt caused!” exclaims Lupe. Sunny is impressed, but can’t quite relate. She discusses her low key weekend plans and they include “a thousand-piece puzz that I want to get started on” and “finishing that bowl of Halloween candy.” Of course, Lupe is encouraging her friend to pursue the object of current fixation, Hunter, suggesting they do a little “Disney+ and thrust” to Lady and the Tramp.

This is a high school movie, so by law there has to be a party at some point. Maybe even more than one! And this is a road trip movie, so there has to be a reason for said road trip. In this case, that reason is to acquire emergency birth control after an awkward sexual encounter was not as protected as the involved parties thought. Cue small town South Dakota pharmacist who declines to dispense this contraception because “morally, my hands are tied” and the girls take matters into their own hands by heading out on the road to find the nearest Planned Parenthood which is several hours away.

Now, as I mentioned before, this is a road trip movie, and to quote the movie Road Trip, “It’s supposed to be a challenge, that’s why they call it a short cut. If it were easy, it would just be the way!” So what I’m saying is, there are some detours on the way to the destination. Moths, mud, meth, bejeweled male members, talking waffles, a doll museum, a surprisingly catchy Christian rap singalong, a band called Rancid Tofu… what more could you want? 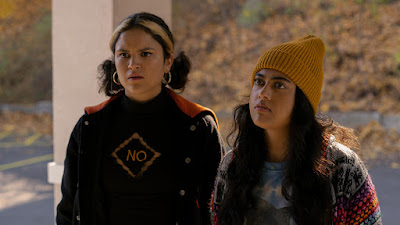 You might be thinking at this point that you know what kind of movie this is, that you’ve seen its kind before, that we already have Booksmart and Easy A and Never Rarely Sometimes Always, so is this really necessary? I assure you, it is. You had Beyonce but you still needed Solange, right? Right. To write this movie off because you think you know what it is, is to miss a movie that is hilarious and insightful and filled with just so many quotes (“grab the squatty potty”) and genuine friendship and non-toxic masculinity (don’t worry, there’s SOME toxic masculinity but like, lots of non-toxic so it balances out) and commentary on reproductive rights and actually some really great parenting moments, too. I love how these young women support each other and build each other up while being so distinctly themselves. I love how drunk Sunny psychs herself up in the mirror before making her move on her crush by saying, “You’re a grown woman and you have erogenous zones!” I love the way the comedy screeches to a realistic halt at one point when true panic and anguish sets in, but that doesn’t turn the movie into an after-school special. I love how this movie deploys the song “Higher” by Creed (a sentence I never thought I’d write).

I knew Natalie Morales from some of her acting roles (Parks and Rec, Going the Distance, The Newsroom) but I’m thrilled that her directorial debut is so self-assured and winning. She’s got another movie coming out this year, Language Lessons, and based on this outing I can’t wait to see it. I also want to check out anything writers Levy and Srinivasan do because their writing here made me howl with laughter on a day I was literally in bed sick and in pain. Normally only comfort movies like Clueless and Blast From the Past can help in that situation, but I might have to add this to the sick day rotation going forward.

I may no longer be HYPER 1 but this movie energized me and I hope it will do the same for you. It’s playing now on Hulu.
Posted by Patrick Bromley at 12:00 PM