I set out to write this column and not sound like an old coot. I failed.

A recent trip to Disneyworld (You’ve heard of it? There’s a mouse?) accomplished two things: it showed me the future and it made me feel old. The future is surely new rides that feature new technologies to simulate, stimulate, and jostle. I once bemoaned the fact that many new rides at neighboring Universal Studios were all intense motion simulators featuring 3-D graphics on screens. I wondered why Universal didn’t just combine The Simpsons Ride, Spider-man, Jimmy Fallon: Escape from Celebrity, and The Transformers Ride into one single ride experience; you board your vehicle and are then shown each ride movie in turn, accompanied by the appropriate, synchronous jostling of each rider. Fifteen to twenty-five minutes later, and you would have ridden half the rides in the park! My preference has always been old-school “physical effects” rides, like Disney’s It’s a Small World, The Haunted Mansion, Pirates of the Caribbean, Jungle Cruise, and Universal’s Jurassic Park, ET, and late, lamented Jaws ride. 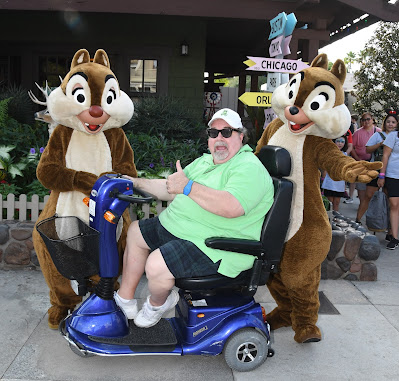 TANGENT: Because I can no longer walk any great distance, never mind the seven to ten miles required of a typical visit to Disneyworld, I rent one of those little scooters. (Yes, I am that foxy grandpa in the motorized cart, nipping at your heels, getting too close to you at corners, and almost running over your children. That’s me!) While the scooter makes the theme park experience less exhausting, it does tend to turn your entire day into one big ride. I like being jostled as much as the next guy, and clearly all the newer rides have been engineered to jostle you in new and better ways, but some of the terrain at Disney is downright punishing. When we visited Disney’s Boardwalk, a recreation of Thirties’ era (era) Atlantic City, I was not prepared for the simulated boardwalk to give my butt a wild, un-simulated Shiatsu massage. Similarly, the “authentic brick streets” of Liberty Square were punishing to the head, neck, and groin areas. The king of all rough terrain, though, was the “Streets of Batuu” in the new Star Wars Land, Galaxy’s Edge. With apologies to Jerry Lee Lewis, it shook my nerves and it rattled my brain. To much jostling drives a man insane. 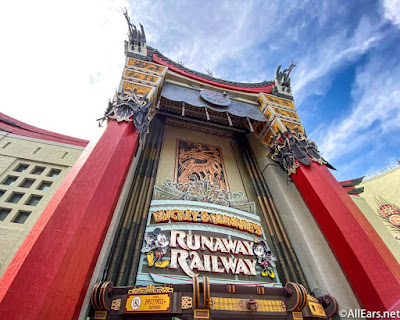 The two rides that captured my attention and imagination on this trip, though, were Mickey & Minnie’s Runaway Railway and Star Wars: Rise of the Resistance, both in Disney’s Hollywood Studios. Both rides have been open for less than two years and feature technologies that define “state of the art.” In the first ride, you board an old-fashioned steam locomotive piloted by Goofy. In the latter ride, you are a Rebel recruit on a routine training mission. On both rides, something goes horribly wrong.

TANGENT: I remember reading a very funny essay a few years ago, and try as I might, I cannot find it anywhere on the Google machine, or I would provide a link. The author used the most basic use of irony (the feigning of ignorance in an argument) and wrote a tongue-in-cheek review of Universal Studios where he faulted the rides because somehow, “something would always go wrong.” He said that Universal should be worried because their rides always go haywire and the tourists are called on to help make things right. On the Jaws ride, the boat is driven into the wheelhouse with the shark in it, in Jurassic Park, the boat enters the containment building with the raptors in it, on The Simpsons Ride, Sideshow Bob seizes control of your ride vehicle in an attempt to kill Bart, and on Transformers; The Ride, the bad robots burst in and it is up to the tourists to protect the “AllSpark” or whatever the hell that MacGuffin was called. You get the idea. The essay was hilarious and effectively pointed out a certain sameness in all of these rides. 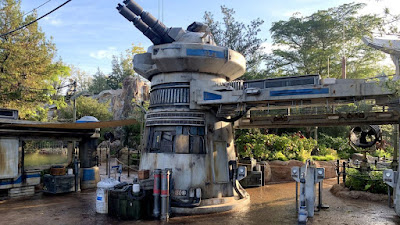 The “Something Goes Wrong” trope was mercifully absent in Disneyworld for the longest time. Natives did not run amok on the Jungle Cruise. Tourists did not flee revenge-seeking, murderous spirits in the Haunted Mansion. A revenge-seeking, murderous Uncle Remus did not seek retribution by throwing tourists over a waterfall to their deaths on Splash Mountain. Disney was safe. Both new rides I’m discussing here prominently feature the “something goes wrong” trope. 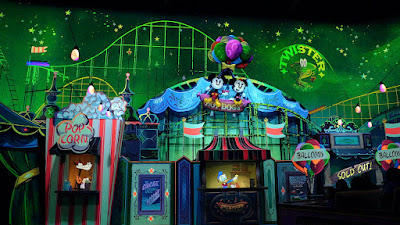 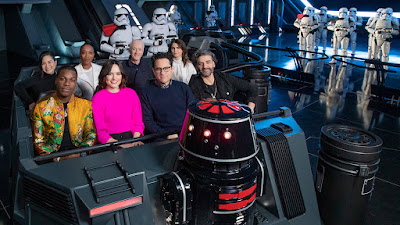 Both new rides try “to place you in a movie” and are very successful. The comment I heard most about Star Wars: Rise of the Resistance ride was that it felt as if you were actually a character in the film. This is fun. The key to both experiences was the new “trackless ride system” that features cars that can literally go anywhere and jostles you in new and unpredictable ways. Several times on both rides, our car went one way and two other cars went another, meaning some riders were having a completely different ride experience than others. This means repeat business, as tourists ride more than once to experience every permutation! My wife commented that the trackless system actually gives tourists a “false sense of freedom,” of being “out of control,” because she was betting the new system was more controlled and more precise than old-fashioned tracks; it’s just a better “illusion of chaos.”

Again, I enjoyed both rides immensely. I spent a long time on the flight home, thinking about all we have lost and all that we have gained. I couldn’t stop thinking about something Bill Maher said a few years ago about entertainment in general. It certainly applies here to my theme park experience. He said, “Everybody wants to BE the show; Nobody wants to SEE the show.”
Posted by Patrick Bromley at 5:00 AM