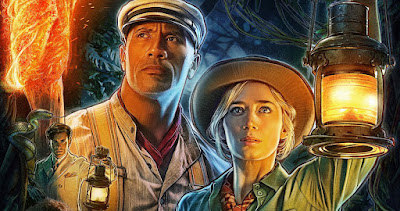 In which Disney plays it safe.

There’s nothing particularly revolutionary about Jungle Cruise, which comes to theaters and Disney+ Premier Access today. It’s a vintage adventure yarn in the tradition of Pirates of the Caribbean and Raiders of the Lost Ark (the latter of which became a Disney property when the Mouse acquired Lucasfilm in 2012), with nods to classics like The African Queen. It stars Dwayne Johnson and Emily Blunt, both familiar faces to Disney audiences. It’s based on the theme park attraction of the same name and threads in minor fanservice notes to that effect. It’s rated PG-13 in the U.S. for sequences of adventure violence and some mild suggestive content. Though its action is set on treacherous Amazon rapids, most of the film was shot against green screen on Atlanta sound stages, giving our heroes that familiar polished glow and allowing CGI animators to craft appropriately-imaginative environments for them to traverse. Each facet of Jungle Cruise feels carefully engineered to provide the perfect balance of cinematic fun. 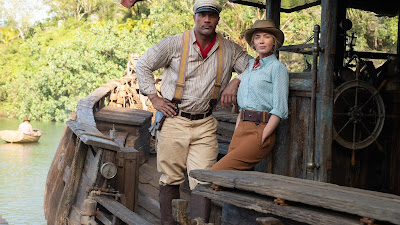 The adventure begins in 1930s-ish London, where Dr. Lily Houghton (Blunt) and her brother, McGreggor (Jack Whitehall), are continuing their obsessive search for the fabled Tree of Life, an ancient phenomenon rumored to hold the cure for all human ailments. Rejected as quack amateurs by the scientific establishment, the Houghtons follow their own leads to the Amazon and hire riverboat captain Frank Wolff (Johnson) as their guide. Wolff is a salty scoundrel of the highest order, orchestrating deadly animal attacks and assaults from painted natives to frighten tourists and embellish his own legend. Though he accepts the Houghton’s exorbitant down payment and agrees to lend his expertise, he’s wary of the feisty Lily (whose choice in masculine outwear earns her the nickname “Pants”) and the foppish McGreggor. The mismatched trio traverse the various dangers of the Amazon pursued by Prince Joachim (Jesse Plemons), an eccentric German nobleman hell-bent on possessing the Tree’s power for himself.
In most respects, Jungle Cruise is exactly what it should be: A rip-roaring, swash-buckling romp chock-full of danger, excitement, and romance. Emily Blunt brings her best Kate Hepburn, imbuing her Lily with all the tenacity one would expect from a capable woman unwilling to live in a man’s world. Though her initially icy chemistry with Frank eventually thaws, she’s never forced to compromise her integrity, rarely batting her eyelashes or making self-destructive decisions in the name of love. Her relationship with McGreggor — though talked about in dialogue more directly than it is explicitly shown on screen — is nurturing and empathetic; she accepts her brother’s perceived shortcomings and shares with him a genuine sibling affection. Lily is an entirely functional character — which I actually mean with more praise than it might sound. She has goals, flaws, an arc, and Blunt seems to be having fun in the role. She’s exactly the kind of archetype that anchors a busy, four-quadrant film like Jungle Cruise. 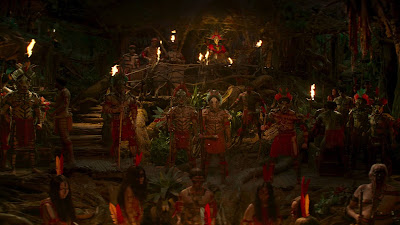 And then there’s Dwayne Johnson, who seems absolutely adamant — more and more with each passing year — that he is a Hollywood Movie Star. For most of Jungle Cruise, his refrigerator frame looks preposterous in period wardrobe, and his attempts to play Cocky Scoundrel are equally laughable. It’s not that a chiseled muscle man can’t play a variety of roles; it’s that, unlike Arnold Schwarzenegger (whose template Johnson appears to be following), he lacks the Austrian heritage necessary for him to be truly extra-terrestrial to American audiences. Simply put: He’s insincere. He’s a pretender. He’s not relatable enough for our sympathy and not strange enough for our wonder. Late-game revelations will add a bit of texture that legitimize his incongruities, but Johnson as an actor is still just trying too hard to be likeable. He’s mastered mugging at the camera and waltzing through his performances as though he’s standing an inch or two above whatever film he’s in. He’s more brand now than performer. Twisted and evil. 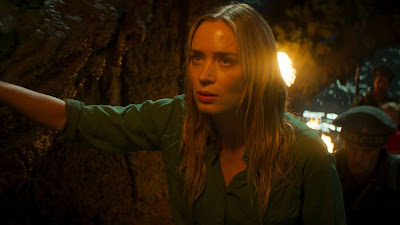 To be fair, though, Jungle Cruise isn’t edgy enough to have been better served by a more fitting actor in the role. The whole thing, well, feels like a theme park ride — a heightened reality in which all wounds are bloodless and all curses have remedies. It’s way too long, and many characters are entirely superfluous (especially Plemons’ bizarre German and Paul Giamatti’s taciturn harbormaster), but that’s just Disney reaching back into the Pirates of the Caribbean well, where it also finds zombified conquistadors and other minor daylight horrors. The important thing is that Jungle Cruise works in every way that it has to, and though every inch of it feels cynically calculated to maximize third quarter profits for Disney shareholders, that’s still enough to give it a passing grade. Jaume Collet-Serra (Run All Night, The Shallows) is a talented director, and he acquits himself nicely in his major-league debut. It’s comforting to know that nostalgia pieces like Jungle Cruise can still work. It’s not much, but for now, it’s enough.
Posted by Patrick Bromley at 5:00 AM