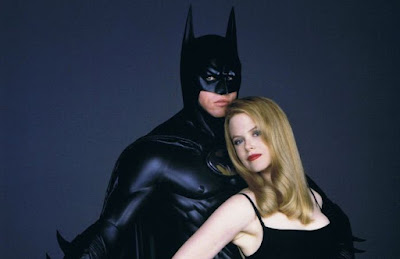 The review duo reunites to watch a stack of movies and visit Monster-Mania Con.

Adam: It had been over a year since I last saw you in person, so it was great lounging for a few days and watching movies together! I brought a few with me and we watched 1995’s Rumpelstiltskin (directed by F This Movie! hero Mark Jones) and 2004’s Satan’s Little Helper (directed by Jeff Lieberman of Just Before Dawn and Squirm fame). I consider these in the WTF category and I more or less wanted to get your reaction. I can sense sometimes when I lose the room and I definitely got that feeling in the final 45 minutes of Satan’s Little Helper. What did you think of these two?

Rob: Rumpelstiltskin was a ton of fun! I appreciated Mark Jones’ grimy energy and the makeup effects that helped transform actor Max Grodenchik into the titular demon. I loved his tendency to throw one-liners into the most inopportune scenarios, as if he knew an audience was watching and he needed to keep us entertained. We got a lot of mileage riffing on Mark Jones (when we weren’t riffing about Thomasin McKenzie) that weekend. 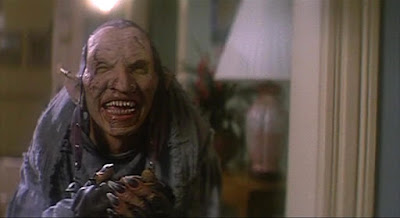 Adam: That movie’s gold anytime Rumpelstiltskin is put in a vehicle. I also love how the majority of that film’s $3M budget probably went to the scene where a truck goes over a cliff and explodes. I miss when movies regularly did that.
Rob: Satan’s Little Helper is a little bit of a different story. It’s definitely WTF, as you said, but the production values, performances, and plotting were considerably weaker than Rumplestiltskin’s. It looks like it was shot on early DV and rides on this incesty plotline between a family of insane alien people. I don’t think you necessarily lost the room with it, but the combination of the late hour and the meandering storyline might have led to fewer laugh-out-loud moments. We’d also just finished watching Tammy and the T-Rex, so Satan’s Little Helper had a lot to live up to. I’m still glad I saw it! 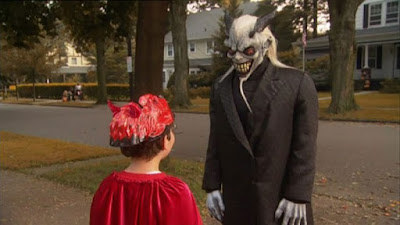 Adam: We also stopped by the Monster Mania convention in Cherry Hill, NJ, and a couple of DVD resale stores. At the con, I got the new Scream Factory Blu-ray of House of Wax (2005) and Blu-rays of Christmas Evil and Fade to Black (two of my favorite new-to-me discoveries from last year’s Scary Movie Month) from the Vinegar Syndrome booth. The Vinegar Syndrome booth was somewhat memorable because we wound up having a conspiracy theory conversation with the guy running the booth who said there’s a theory out there that Paul Walker died in a drone strike. He didn’t believe it and neither did we, but it sure was an odd experience stemming from your seemingly innocuous purchase of Tammy and the T-Rex. What movies did you pick up?

Rob: Yeah, that was odd. Aside from Tammy and the T-Rex (or as the film’s opening credits read, Tanny and the T-Rex), I also picked up Fade to Black, which, like you, I discovered and fell in love with last #ScaryMovieMonth. We also hit a few pawn shops for used discs. The best find there was probably Splice, a movie I remember being very sexy in ways I should definitely be ashamed of. We’ll see if that holds up when I rewatch.

Adam: We didn’t get to meet any celebs at the convention this time because everyone’s lines were starting to get long. Matthew Lillard and Skeet Ulrich’s wait was at least a couple of hours. To meet Danny Trejo we would have had to wait outside and then come back inside to stand in a different line which didn’t seem worth it. Even William Zabka had a line about 100 people deep. Good for them but, you know, bad for us so we just walked around and shopped. The only celebrity moment I had was when I saw Martin Kove in costume after a Cobra Kai photo op and he walked into the hallway and loudly declared “Cobra Kai never dies!” I think he thought it was going to get a cheer from fans but it backfired and people just looked confused. He immediately walked outside afterwards.

Rob: You were lamenting the lines this year and attributing it to the differences in both population density and the number of conventions between the Chicago area and the East Coast. Do you think that will discourage you from attending cons in my neck of the woods in the future?

Adam: Maybe? The trouble is the cons on the East Coast get better guests who don’t always hit the circuit out to the Midwest. I think horror cons are a much bigger deal out East (between Monster Mania/Chiller/Spooky Empire etc.), especially in areas like New Jersey, Pennsylvania and Florida. There’s so many compared to the Chicago area and they draw much bigger crowds. The largest in the Midwest are the Horrorhound conventions but those aren’t very close to Chicago either, being in Indianapolis and Cincinnati. As much as I love Flashback Weekend and (to a lesser extent) Wizard World and Days of the Dead, we normally get the same people rotating every couple of years.

The final two movies we watched were revisits on HBO Max of Batman Forever and Speed 2: Cruise Control. Forever played as it always does. The thing that impressed me most about it this time is that the 2 hour runtime feels like half of that. That movie moves. I was hoping this would be a magic rewatch of Speed 2 where I found more to like in it, but that was not the case. The boat collision and final fight between Sandra Bullock-Jason Patric-Willem Dafoe in the third act are pretty solid, but before that is way too much (pardon my pun) treading water. There’s a solid hour there in the middle where the movie feels like a DTV knockoff of The Poseidon Adventure and Jason Patric is a big step down as our hero when compared to a perfectly cast Keanu Reeves in the original Speed. 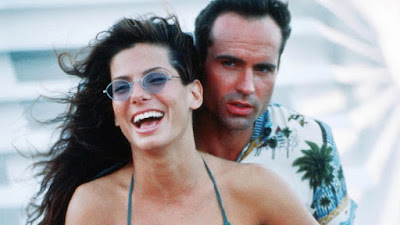 Rob: I know Forever is one of your signature movies, and I don’t want to step on your toes, but long before I was a member of the FTM family, I argued that it’s the best Batman story of the original four-movie run. Aside from the Kidman factor (which must always be considered), I thought Val Kilmer made a great Bruce Wayne and that it’s the only one of the four that’s entirely about the bisected nature of Batman’s identity. Each other characters’ arc follows that same trajectory — The Riddler, Two-Face, Robin, and even Dr. Chase Meridian are each struggling to reconcile these two sides of themselves.

Speed 2 is just blah. You mentioned while we were watching it that the producers must have told Sandra Bullock that she needed to make up for Patric’s wet blanket personality by putting the movie on her shoulders, and it shows. She has an odd, eccentric energy in this one that doesn’t really match the original. The film’s premise is lazy and its execution is kind of stagnant — I had to step out for a half-hour chunk in the middle, and I returned feeling like I hadn’t missed much of anything at all. Still, it’s good to check back in with some of those legendary flops and search for hidden gems. It just wasn’t the case this time.

Anything else you want to cover from this weekend? Aside from watching movies, we had a great time! I’m so glad we’re back to semi-normal traveling conditions. Fingers crossed for an in-person #FThisMovieFest in 2022!

Adam: Nope, I’m good. We’ll be back next week with a revisit of another box office bomb, Michael Mann’s Blackhat. Until next time…