Will stories of a dystopian future ever not come true when you watch them 40 years later?

Last week I leaned all the way into this never-ending pandemic with The Plague Dogs. This week I'm going a little lighter with a movie about citizens being swooped up en masse and sent to “re-education” camps to correct their errant ways in order to be transformed into thoughtless government robots. See? Lighter. 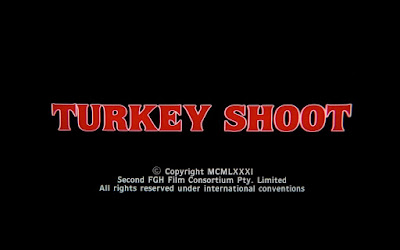 Turkey Shoot, from director and Ozploitation giant Brian Trenchard-Smith, stars Steve Railsback as a freedom fighter named Paul who runs a pirate radio station called “Radio Freedom” in an Australia that is now governed by fascist psychopaths who require all citizens to think the same, dress the same, and bow to their every whim in order to create the perfect society. The film opens with real-life newsreel footage of militarized law enforcement beating, battering, and gunning down protestors in Oceania. Along with an innocent woman played by Olivia Hussey named Chris, Paul is thrown into the back of a police van and rushed into an internment camp run by barbaric guards – the likes of which would be found in a film like Ilsa, She Wolf of the SS – and filled with prisoners dressed in yellow jumpsuits. The warden of this prison camp is Thatcher (Michael Craig), a seemingly calm and collected man with an absolute monster lurking beneath the surface. When Paul, Chris, and two other prisoners are unloaded into the prison yard they are greeted by a hulking giant of a man who acts as the head guard and his weaselly lackey who uses a bullwhip to punctuate his every sentence. Upon their orientation, the new prisoners are greeted by Thatcher, who lays out the very simple reason these camps exist: “Freedom is obedience. Obedience is work. Work is life.” This, of course, is the antithesis of what Paul and his comrades have been fighting for all along. “Fight against corporate obedience,” he says into his radio transmitter just before being whisked away to his demise.

Trenchard-Smith is known for his over-the-top, dystopian, stunt-filled movies and his beliefs in fighting the system and not bowing down to corporate bullies. Movies like The Running Man, Surviving the Game, and more recently The Hunger Games all carry similar messages in that the little people (me and presumably you) are just pawns in some sort of evil game being conducted by someone with more money and more power. That Trenchard-Smith opted to use voiceovers for most scenes in Turkey Shoot (mostly for technical purposes, I suppose) only adds to the surreal quality of this dystopian, but very plausible, future where our personal voices are stolen from us and replaced by thoughts and language dictated by something or someone more powerful than us. When Thatcher comes out to introduce himself to his new prisoners, he's dressed in a tunic resembling a priest's cassock and collar. Ever since the beginning of time, people have been trying to force upon everyone else their spiritual beliefs. Constitutional amendments haven't stopped others in a higher seat of power from attempting this. In Turkey Shoot, this is a governing entity's attempt at “castrating” free will from all human beings. We see this quite literally play out in the film where a prisoner is chained to two spherical jugs filled with gasoline. The guards are pushing the prisoner down, kicking the balls (testicles) around, spilling the fuel all around, until finally they light the man on fire.

While the opening 20 minutes give a very dim and cynical view for the future of mankind, the remainder of the movie is more fun. Paul, Chris, and three other prisoners are given their chance at freedom. Thatcher organizes a “turkey shoot,” where he gathers his rich friends and a few of the prison guards to hunt a select number of prisoners. The inmates are set free in intervals, and four hours later the hunt begins through the jungle. Thatcher's hunting party is comprised of himself, a sadistic lesbian with a crossbow that shoots exploding arrows, the lead guard and his lacky, a prim and proper nobleman, and a psychotic Nazi who uses a sideshow freak werewolf named Alph as a hunting dog. As the hunt begins and we leave the prison yard, this group of evil humans turns from depressing and scary to Hanna-Barbera villains.

The stunts, gore, and special make-up effects quickly turn things from dark to comedy. Several times I found myself laughing out loud at the outrageous blood and guts shown throughout the hunt. Heads explode, heads are chopped off, bodies are cut in half, hands are sliced off with machetes. After capturing a female prisoner, the sadistic lesbian says in a great Mary Woronov impression, “I'm going to make you feel like you've never felt before,” while licking her lips. Thatcher is driving a miniature version of the urban assault vehicle from Stripes while the Nazi and werewolf are driving a tiny quarry bulldozer. We are spared from our depressive thoughts for an hour.

Turkey Shoot goes from a depressing vision of the future to a depressing vision of the future but with tons of fake blood and explosions. Movies like this rarely leave us with a hopeful outlook on life. “If we quit now, everything we believe in dies,” Paul says to Chris. Here I find this to be a hopeless message. There isn't an easy or even happy outcome. The good guys may win this battle, but they still have an entire government (or world) to dismantle. Before the credits role a title card with a quote from H.G. Wells is superimposed over Paul and Chris running to their “freedom” that says, “The revolution begins with the misfits.” Fine. But I'm going to need a lot of fake blood and explosions to help me through this revolution.
Posted by Patrick Bromley at 5:00 AM