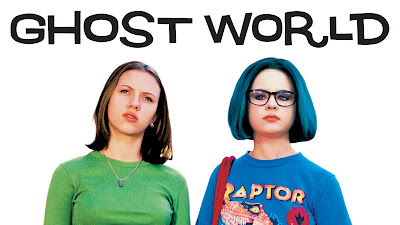 • Best Scene/Moment: The scene with the band Blues Hammer always makes me laugh, but honestly it’s impossible to decide since this is one of those movies where most scenes could be considered the best scene.

• Best Song: The Indian dance tune, “Jaan Pehechan Ho” (by Mohammed Rafi) that Enid (Thora Birch) listens to at the beginning is catchy and acts sort of as the movie’s theme song. 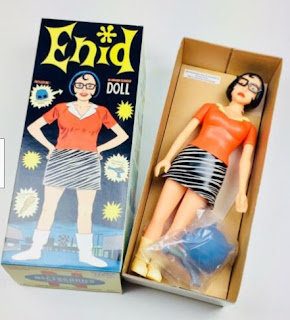 • Director Check: Ghost World was co-written (with Daniel Clowes) & directed by Terry Zwigoff, who, prior to this film, directed two documentaries – Louie Bluie and 1995’s terrific Crumb. Ghost World was Zwigoff’s first narrative feature film and he was nominated for a Best Adapted Screenplay Oscar. He followed up Ghost World with the biggest financial success of his career – 2003’s Bad Santa, a movie I used to like but never feel like revisiting. Zwigoff’s output has slowed down in recent years with his last theatrical feature,  Art School Confidential (which reunited Zwigoff with Clowes), coming and going without much fanfare in 2006. I remember being disappointed by it in comparison with Ghost World. Zwigoff’s most recent work was directing a pilot for Amazon in 2017 titled Budding Prospects.

• Double It with This 2001 Movie: The Royal Tenenbaums

• Year 2001 Movies to Trailer Before It: Amelie, Donnie Darko, Sidewalks of New York 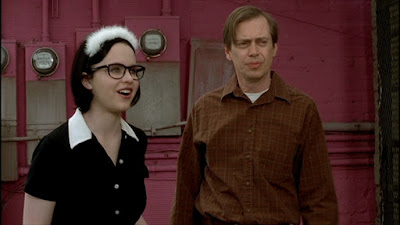 • Mall Movie? It’s an indie movie but also a teen movie so I’m leaning towards it being a mall movie.

• Only in 2001: Dave Sheridan playing that mullet guy at the convenience store. I feel like he played this character in commercials or on MTV bumpers too.

• I Miss (tie): Browsing around in a video store and being fresh out of high school with few responsibilities in the early 2000s. 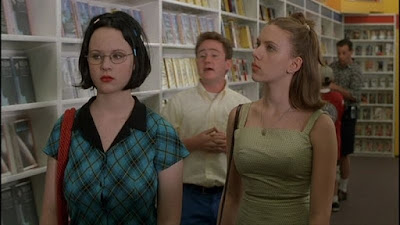 • I Don’t Miss: Being ironic hipster adjacent in the early 2000s.

• What I Thought in 2001: I was a huge fan of Ghost World when I caught up with it on DVD in the 2001/2002 timeframe. I was in college then, so I identified with the snarky teen characters and thought the movie was equally effective as both a drama and a comedy. I re-watched Ghost World a lot in that era (era) and remember the ending sticking with me since it’s open to interpretation.

• What I Think in 2021: I still like Ghost World quite a bit, but maybe don’t love it as much as I used to at least in terms of re-watchability. This was my first revisit in a while and I found the movie more depressing than before because I’m no longer identifying with the snarky teenage characters and more with their targets – the put-upon adults, who are living their lives unknowingly under Birch and Johansson’s microscope. The film’s themes still are very resonant.
Posted by Patrick Bromley at 5:00 AM