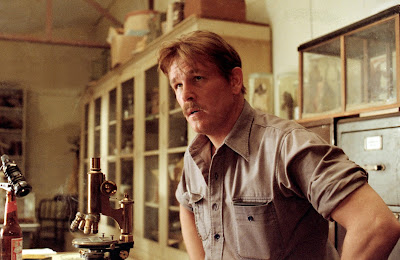 A cautionary tale of overfishing?

I have an admission: I've never read John Steinbeck. Sure, I know Of Mice and Men, East of Eden, and Grapes of Wrath. The films are great. The novels, I'm sure, are out of this world. From the films I can see that Steinbeck knows how to build worlds, focusing in on specific communities and characters. In Mice we have George and Lennie and their search for work. Eden follows two families primarily based in Salinas, CA. In Grapes we follow the Joads, tenant farmers who make the trek from the Dust Bowl of Oklahoma to the rich farmlands of California. In Cannery Row, we're once again focused on a specific community – very specific this time around – and the characters within.

Adapted for the screen and directed by David S. Ward, Cannery Row tells the story of the small section of Monterey, CA, along the shoreline, where sardine canning factories and their mighty workforce reigned supreme. What was once a booming industrial neighborhood filled to the brim with blue collar workers is now a derelict ghost town whose only inhabitants are prostitutes, homeless ex-factory workers, a trumpet-playing soothsayer, and a self-proclaimed marine biologist. The main hook of the film is a budding and oft-interrupted romance between the marine biologist and a failed prostitute, but like most of Steinbeck's work, several characters on Cannery Row get their time in the spotlight. 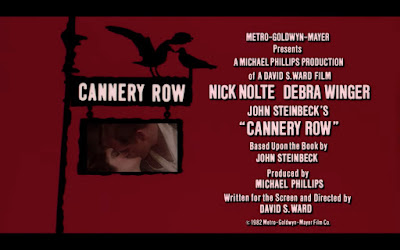 Nick Nolte (with brown hair and a glorious mustache) plays Doc, our marine biologist and notorious bachelor who, as explained by the narrator, is the only person in town who gets along with everyone. Debra Winger is our newly-arrived romantic interest who has traveled across the country working odd jobs just to get to the promise of California but, to her dismay, California is about as promising as Pennsylvania. Doc lives in and works at his lab, an elongated shanty where the waves of the Pacific lap against the outer walls. Catercorner to Doc is the bordello, run by Fauna Flood as portrayed by Audra Lindley, whose clientele is primarily soldiers on leave from WWII or drunk fraternity boys who accidentally wander into town. The Seer, played by legendary character actor Sunshine Parker, greets the sun every morning and the moon every evening by serenading the town with his trumpet while standing on the rocks on the beach. In between and everywhere else are the homeless men – ex-cannery workers who spend their days sleeping in rusted out boilers from the factories and their nights scrounging up whatever money they can to buy booze. These men are “led” by Mack, played marvelously by M. Emmett Walsh, and his best friend – another Lennie-esque creation of Steinbeck's – Hazel, played by Frank McCrae. 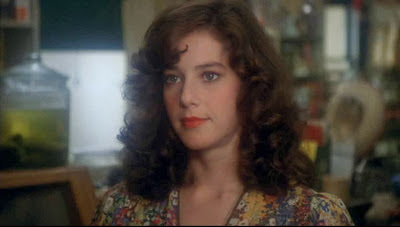 John Huston's gravelly voice is that of the narrator's. Ward's dialogue for him aids in speeding things along, allowing us not to get caught up in the mundane lives of these characters, but also turns this story into a tale our grandparents might tell us. Sven Nykvist (Ingmar Bergman's cinematographer for many years) shot the film, and with his soft focus, gives Cannery Row that dreamy quality needed to keep us within that storybook feel. Along with Jack Nitzsche's score of '40s jazz that oozes like molasses and Richard Macdonald's breathtaking set design, I found myself drifting off to sleep that night dreaming of walking the streets of Cannery Row, listening to the distant music, smelling the salt in the air. This is a film in which I want to live.

Steinbeck's novel of the same name is based on the real life Cannery Row of Monterey and the characters that lived within. As Suzy is interviewing for a job at the brothel, Fauna tells her, “One of the reasons people live on the row is they don’t wanna be known.” This one line tells us everything we need to know about everyone that lives here. Doc could easily move up north, get a comfortable job at a university, live in a nice neighborhood surrounded by nice people. He chooses to stay on the row, though, because he doesn't want to be known. Deep down, I think this is what most of us want. In all of us dwells great potential to do great things; a bright future lies ahead. But most of us don't actually want that. Like Doc, and given the opportunity, I think we'd shirk that potential and those responsibilities and live that simple life with simple people. 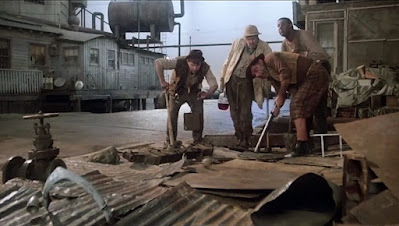 There's no denying Cannery Row is ultra-stylized and ultra-romanticized. Like every Steinbeck adaptation I've seen, the story portrays instances during drastic times in American history. The difference, though, is that these stories make the real world seem a lot less scary, something we all need every now and then. Cannery Row is a section of Monterey hit doubly hard by overfishing, the war, and depression. What Steinbeck, and in turn Ward, does is attempt to shine a light on that dark time. During Doc's and Suzy's on-again off-again courtship, Doc sneaks into the brothel to express his feelings to Suzy. What transpires is a dance sequence that left me wheezing and in tears. It goes as well as you might imagine a dance sequence with Nick Nolte would go, and ends with him doing an impression of Jerry Lewis in an uncomfortable situation. It's the hardest I've laughed in a long time, and it was needed.

I urge everyone reading to watch Cannery Row as soon as possible. You can get the Warner Archive Blu-ray or stream it on HBO Max, and after 18 months of a pandemic I think it would do you some good. The film (and the novel, I assume) ends with the narrator saying, “Once again, the world was spinning in greased grooves.” And I know that's what we're all striving for.
Posted by Patrick Bromley at 5:00 AM