Kick back, drink a Pumpkin Spice Latte and watch these double features!

Double Feature 1:
Adam: #1: Hellraiser: Bloodline
Patrick: #2: Morgan Stewart’s Coming Home
Patrick: Trailers/Shorts: Let’s Get Harry, Appointment With Fear, The Shrimp on the Barbie
Patrick: Theme: An Alan Smithee Film
Patrick: These two have nothing really in common except that their respective directors took their names off the finished product, but I also kind of like both -- especially Morgan Stewart, which could play well with Bloodline if only because Morgan and his girlfriend are obsessed with horror movies. Did I mess everything up right from the start?
Adam: Not at all. Morgan Stewart’s Coming Home wasn’t on my radar, but I like Jon Cryer so I should probably check it out!

Double Feature 2:
Patrick: #1: Trading Places
Adam: #2: Stripes
Adam: Trailers/Shorts: Smokey and the Bandit II, Back to the Future, Coming to America, Indiana Jones and the Last Crusade
Adam: Theme: 1980s Summer Movie Season 2nd Highest Domestic Grossers
Adam: This was a double with Coming to America at first, but I didn’t want it to be both a “1980s Summer Movie Season 2nd Highest Domestic Grossers” double feature and an Eddie Murphy double bill. This isn’t Tetris where I need to blow up lines and columns en masse. Should I see Stripes? I honestly can’t recall if I ever have or just know it from cultural osmosis. Same with Trading Places for that matter. I know I’ve been in a room where it’s on and I have some memory of certain scenes, but I don’t know if I’ve ever sat and watched the whole thing straight through.

Patrick: I love Trading Places -- it’s probably my favorite Eddie Murphy comedy -- and, as a fan of Bill Murray and Harold Ramis, there’s a lot that I like about Stripes even if it shits the bed about ⅔ of the way through. I think both are worthwhile and I would absolutely have a blast during this double feature. 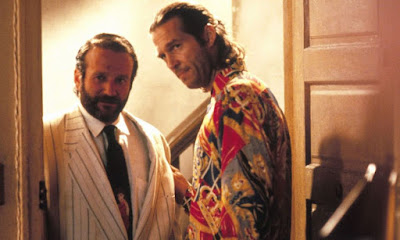 Patrick: I think I surprised myself here by realizing I like movies about radio (but not Radio; isn’t that like rain on your wedding day?), and while I wouldn’t characterize The Fisher King as a movie about radio first and foremost, it does play a major role in the movie. I really like that movie and am due for a revisit. Is it still good? I tend to like Terry Gilliam movies even though I’m not crazy about Terry Gilliam the person.

Adam: I’m not sure since I’ve never seen The Fisher King (or Radioland Murders for that matter). Three out of 5 of my picks this time around (#3, #7 and #9) are for movies I haven’t seen but have on my Amazon or HBO Max watchlists. I wanted to get your input on good pairings with them. I’m a fan of radio movies too, especially like Good Morning Vietnam.

Double Feature 4:
Patrick: #1: Captain America (1990)
Adam: #2: Sgt. Kabukiman N.Y.P.D.
Adam Trailers/Shorts: Teenage Mutant Ninja Turtles, Dick Tracy, Darkman, Robocop 2
Adam: Theme: Heroes of 1990
Adam: I had this as a Ronny Cox 1990s double bill with Scissors for a little while but changed my mind. I might be more excited about the trailer reel than the actual double feature for this one.
Patrick: That is a killer trailer reel. Between a Pyun movie and a Troma movie, this feels like a real bone thrown to me. Thank you. 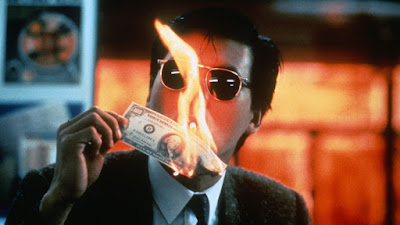 Patrick: I have no real rationale here except for a stupid play on words, but I feel like this double feature would kick ass. I’ve never actually seen A Better Tomorrow so this would be a great excuse to finally check it off. Have you seen it or any of its sequels? I’ve been wanting to since the ‘90s.

Adam: I should probably get a Child’s Play 2 poster signed. The cast does a lot of cons. It’s my favorite of the sequels. This double feature goes well because it’s like Times Up Kristy Swanson and Time’s Up Charles Lee Ray. Were you a fan of Beverly Hills 90210?

Patrick: I used to watch 90210 for sure, mostly because I had sisters. It was a pretty good show. This theme and lineup is incredible. I love the inclusion of the Tori Spelling scene from Scream 2, mostly because Luke Wilson is so, so funny in that scene. I don’t know if Child’s Play 2 is my favorite sequel (I love them all except for 3), but I know I can watch it pretty much anytime. I love it too. 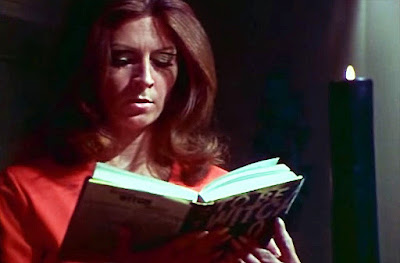 Adam: #1: I Married a Witch
Patrick: #2: Season of the Witch
Patrick: Trailers/Shorts: The Love Witch; The Witches of Eastwick; Practical Magic; Burn, Witch Burn!
Patrick: Theme: Witchy Women
Patrick: I know I was too obvious here, but I like the idea of contrasting similar material with one comedic take and one dramatic take. Plus, it gives us an excuse to watch an underappreciated George Romero movie, which I will never pass up. Erika and I watched both of these as part of our 24-hour marathon in 2019 and they play well together.
Adam: I saw Season of the Witch at a 24-hour horror marathon at the Music Box once and remember being sort of perplexed by it. I’m due for a rewatch, especially since I’m riding a high on early '70s Romero because of The Amusement Park.

Double Feature 8:
Patrick: #1: Shag
Adam: #2: Doc Hollywood
Adam Trailers/Shorts: You Can’t Hurry Love, Singles, It Could Happen to You, The Road to Wellville
Adam: Theme: Funny Fondas
Adam: I miss Bridget Fonda in movies so much. I feel like this is at least the 5th Friday Night Double Feature where one of us has put Doc Hollywood as one of the films which reminds me that I need to rewatch The Hard Way soon before it leaves HBO Max.
Patrick: I love this double bill and I love Bridget Fonda a whole lot. I respect her decision to retire but I miss her too. How great is It Could Happen to You by the way?
Adam: It’s good. I saw it for the first time on a charter bus as my 7th grade class went to a campsite for a few days. I was talking to the other 12-year old’s about it all week. 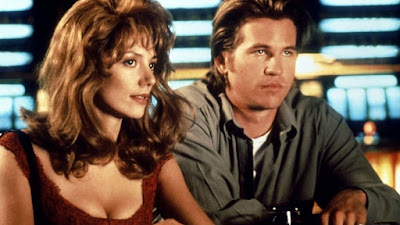 Patrick: We might be the only theater in the country doing a Kilmer/Whalley-Kilmer double, but Val definitely made me want to go back and watch their stuff together. That documentary was really good because it reminded me how much I love Val Kilmer, which I had for some reason forgotten. I feel really guilty about that.

Adam: I had a similar takeaway from the documentary. I’m bummed he seemed sad about doing cons because I’d love to meet him again someday. He was cool when I met him years ago. I can’t wait to watch Kill Me Again and dive into some more Joanne Whalley-Kilmer flicks. Outside of Willow, I’m not sure I’ve seen any.

Adam: First, you’re welcome. Second, I know this is a big mood swing between the two movies, but I couldn’t resist. Nicolas Cage must like filming in Vegas. Do I need to see Leaving Las Vegas again? I only watched it once when I was like 13 or 14 years old.

Patrick: I weirdly bought Leaving Las Vegas on Laserdisc back when I was collecting those, I guess thinking it was a movie I would rewatch (such is my love for Nicolas Cage). I don’t think I ever watched it. My first and last viewing was in the theater in 1995. I respect this double (and thank you), but I might switch the order if we were doing it for real.
Posted by Patrick Bromley at 5:00 AM