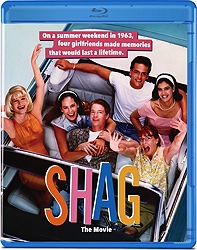 I will never apologize for my love of this movie.

When I was a kid, the local theater down the street from my house did a double feature of UHF and Shag for the low price of $1.50. I had saved my allowance so I could afford an admission, a popcorn and a cherry Coke and spend a Sunday afternoon at the movies. The real reason I was excited was because of UHF, which was whisked to the second run theater after a disappointing release. I was (and am) a huge Weird Al fan, so the fact that I would finally get to see the movie so soon after it had played the big theaters felt particularly special. That I would get to see a second movie called Shag, presumably a comedy set in the '60s and starring actors I did not know, was just a bonus -- value added to my UHF admission.

Well, that Sunday afternoon turned out to be one of the best double features I've ever attended and one of my favorite movie memories of all time. That I loved UHF should come as no surprise. It's a movie aimed right at 11-year old boys with a demented sense of humor and a love for Weird Al. What was much more unexpected was my reaction to Shag, a film for which I fell so hard and so instantly that it was one of the great surprises of my young movie-going life. Even my fellow 11 and 12-year old friends immediately understood my affection for the film and chose not to ridicule me for liking a movie they saw as being "for girls," something I always appreciated about them. I'm glad that young people outgrow such classifications, just as I'm glad I never had a need to subscribe to them. That kind of thinking would have prevented me from loving Shag. I don't want to live in a world in which I don't love Shag. 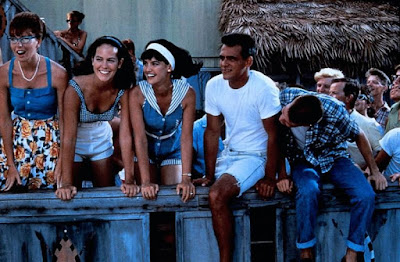 Directed by Zelda Barron from a screenplay co-written by former SNL cast member Terry Sweeney, Shag tells the story of four friends on a weekend getaway to Myrtle Beach in the early '60s. There's Carson (Phoebe Cates), engaged to be married but perhaps not super excited about it; Melaina (Bridget Fonda), the boy-crazy preacher's daughter with more experience than her friends; uptight Luanne (Page Hannah), who we know is uptight because she wears glasses and scolds the other girls; and Pudge -- aka Caroline (Annabeth Gish) -- the girl next door with dreams of winning a big dance contest. When the girls meet a couple of cute guys on their trip (played by Robert Rusler and Scott Coffey), new relationships are formed, complications arise and adventures are had.

Plot isn't all that important in Shag. It's a movie about a time and a place and an age and a feeling, not so much about a story. It's a "one magic summer" movie condensed to the span of a weekend, in which love is found and lost and the bonds of friendship grow stronger. It's a film that makes me nostalgic for a time I did not live through; the music is wall-to-wall great, the clothes dynamite, the locations gorgeous and the attitudes sunny and optimistic. It is, above all else, charming. We sometimes dismiss charming as being too slight or of having no stakes. This, of course, is bullshit. Think about how many movies fail to be even charming -- especially the ones that reach for it and come up short (see: most romantic comedies of the last 20 years). To suggest that Shag should be something more than a sweet, good-natured and incredibly fun celebration of friendship, music, dance and young love is a fool's game, especially when it's so good at being that thing. Even as a kid, I understood the value in a movie that allowed me to spend time with characters I loved and transported me to somewhere else. 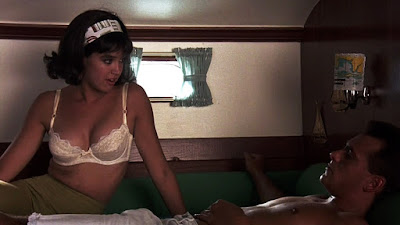 Besides all the fun music and hair and makeup and production design and Barron's energetic direction, what makes Shag such a sweet, special movie is the cast. I saw the movie at a time when I really only knew Phoebe Cates from Gremlins, mostly because I was too young to have seen Fast Times. This was the first movie in which I became aware of Bridget Fonda, who certainly announces herself as a presence on screen but who seemed to larger-than-life and experienced for 11-year old Patrick to develop feelings for (this would come later, when Fonda became my main celebrity crush through much of high school). No, the cast member who stole my heart back in 1989 was Annabeth Gish as the unfortunately-named Pudge, which even the characters in the movie recognize isn't appropriate for someone who is thin and beautiful (without really acknowledging that it's not an appropriate nickname for anyone). Even at age 11, I was a sucker not for the Prom Queen, but the Prom Queen's friend -- the girl who was smarter and funnier and understood the world better because she saw through the bullshit while living in the shadow of someone else. (Somehow, as luck would have it, I eventually married the girl who is both.) Between Shag and Mystic Pizza, in which she plays essentially the same role, my Annabeth Gish crush was cemented. Permanently. 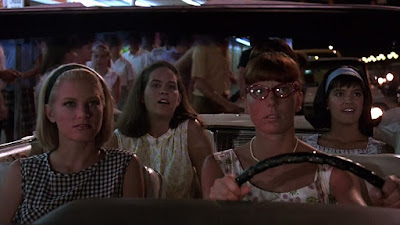 Shag isn't just a terrific, likable, and, yes, charming movie. It's also one of those defining moviegoing experiences of my young life -- a moment when I realized that even among my friend group, and to a larger extent among other kids my age, I was always going to like a different kind of movie. Falling in love with a movie about a girls' weekend in the 1960s didn't exactly make me cool in the 6th grade, but that didn't bother me. I would rather love Shag than be cool. Here are we almost 30 years later and I'm still not cool and I still love Shag. It's the most fun.