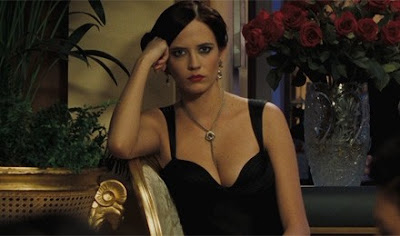 Freshly-minted 00 agent James Bond (Daniel Craig) is having a tough time adjusting to his new post. He’s clearly an effective killing machine with no qualms about getting his hands dirty, but his methods are considered sloppy and overwrought by head boss lady M (Judi Dench). After his pursuit of a terrorist (Sebastien Foucan) ends with an embassy in ruins and her entire department in the hot seat, M begins to regret her decision to promote Bond to a position with so much autonomy. She worries that the young recruit is still too rough around the edges to understand the nuances of the work, that he might lack the judgment to know when to smash through a wall and when to simply jump over it. Still, she sees something in Bond that makes her willing to forgive his clumsy brutality, his constant insubordination, and his inability to see the forest for the trees. “Any thug can kill,” she tells him, “I need you to take your ego out of the equation and judge the situation dispassionately.” While Bond initially writes this off without too much thought — he’s still far too green to understand the advice — his journey into the world of Casino Royale will present the cocky upstart with a reason to listen more carefully. That reason’s name is Vesper Lynd.

“Why can’t nice guys be more like you?” asks the beautiful Solange (Caterina Murino) as she straddles 007 on the floor of his ocean-view villa. “Because then they’d be bad,” he replies with a smirk. While tracking Alex Dimitrios (Simon Abkarian), Bond plays up that bad boy persona by winning poker games, seducing married women, and punking arrogant jags who mistake him for a valet attendant. But Solange’s torture and death at the hands of Dimitrios’ superiors shows Bond that the aggressive pursuit of his own satisfaction is blinding him to the real stakes of the game. His reckless swagger comes with a cost that other people have to pay, whether or not he cares about them at all. And yet, Bond is a slow learner: when M assigns him the task of hunting criminal mastermind Le Chiffre (Mads Mikkelsen), Bond assumes he’s meant to put a bullet in the man’s head. Again, the blunt instrument. But M’s task is far more complicated — Bond must use his wit and intelligence to beat Le Chiffre at his own game, namely the high-stakes poker tournament he’s arranged at the Casino Royale in Montenegro. Bond will be staked $10 million to play and assigned a handler from the Treasury who will give him $5 million more if Bond plays smart. That handler’s name is Vesper Lynd.

He didn’t see her coming. No one sees her coming. But when Vesper (Eva Green) meets up with 007 for the first time, she gets exactly the smarmy asshole she expected.* Like M, though, Vesper is able to weather Bond’s bullshit because she sees his potential. In fact, their shared Sherlock Scan reveals that they’re both a bit full of it: Lynd is too smart and energetic to be a bean counter, and there’s more humanity to Bond than his posturing allows. They’re both orphans, both driven by a mysterious itch that neither seems able to scratch. Bond trusts her immediately and takes every opportunity to be impressive — flashing his pistol, blowing their covers with the hotel, coming up with the name “Ms. Stephanie Broadchest" — that he can. But this new reliance on a partner with a tricky disposition also puts Bond off his usual game; he thinks he’s being cute when he presents Vesper with a dress that would catch his attention, but she fires back with a properly-fitting dinner jacket and a reminder that he’s not as complicated or charming as he thinks. In any other context, that jacket is a benign gesture, a way to flirt. But in the Bond universe, the tuxedo is an integral part of the mythos. Our girl just invented it.

But Bond isn’t shaking martinis just yet. He still has something to prove, and Vesper is still chiding him for his inflated ego and tendency to leap without looking. Like M, she urges him to be more tactical, a skill he finally shows off during the stairwell fight. It’s an important moment for both of them: Bond dispatches two baddies with his bare hands (an escalation of his brutal fight from the pre-credits scene) and keeps Vesper safe from harm. What he can’t protect her from, however, is what it feels like to fear for your life and then see two men murdered. It breaks Bond a little, too, and it’s no coincidence that the first people he kills in front of Vesper are the ones who make him finally look himself in the mirror and feel the gravity of what he’s done. This is where the ego debate becomes about something else entirely — Bond’s soul. When he asks for the additional $5 million after falling for Le Chiffre’s fake bluff and tapping out, Vesper doesn’t turn him down because she’s cruel; she does it because she doesn’t want him slipping any further into whatever it is he’s becoming. The irony is that while she can’t save him from himself, she does force Bond to make contact with the FBI’s Felix Leiter (Jeffrey Wright), another staple in the series. That’s two.

But she’s also leaving him without a safety net, and though he’s emboldened by the thought of proving Vesper wrong with Leiter’s money and some new poker tactics, Bond is crippled and alone when Le Chiffre’s femme fatale Valenka (Ivana Milicevic) poisons his drink. Stumbling and fumbling with combipens and defibrillators, Bond is unable to revive himself without Vesper’s last-minute heroics. It’s The Kiss of Life, an old storytelling tactic usually signifying a rebirth, and Casino Royale puts an interesting spin on it with no less effect. Just as Vesper put him in his famous tux, she literally restarts his heart, turning his lowest moment into a new beginning. Bond now trusts his instincts at the poker table enough to take the $150 million pot. Vesper’s proud of him during their celebratory dinner and takes the opportunity to remind him that he’s more than a thug and a killer: “Just because you’ve done something doesn’t mean you have to keep doing it,” she says. But 007 uses that new brain of his to point out the significance of the Algerian love knot around her neck. It seems they’re both fighting old battles and living in the past. Maybe forever. Still, Bond is reinvigorated with fresh perspective just in time for him to realize his contact Mathis’ (Giancarlo Giannini) betrayal and rescue Vesper from her kidnappers.

There’s no need to get into the symbolism of Bond’s torture or the weeks of Crazy Naked Sex he and Vesper have as they recover, but it is important to note how they both contribute to the process of stripping Bond down to his essential parts and rebuilding him from scratch. “I have no armor left,” he tells Vesper when she confesses the affection she’s been holding in. “Whatever is left of me, whatever I am, I’m yours.” He decides to quit the life of a killer and commit himself to his lady love. But it doesn’t last: it turns out Vesper does has a past, and she’s been forced into manipulating Bond to safeguard it. It’s a hard lesson for 007 to learn — not necessarily that she betrayed him (try as he might, he can’t deny their love was real), but that heart and soul are heavy, destructive weapons to wield. They’re messy and expensive. But when they’re measured and calculated, when they’re used in conjunction with a killer instinct and a quick wit, they’re the most powerful assets a secret agent can have. The James Bond who closes out Casino Royale — the one with Connery’s three-piece suit and the famous catch phrase — is the one Vesper Lynd built, the one with plenty of reasons to listen carefully and play it smart.

*The only two moments of this film I find unforgivably bad are those in which someone mansplains bluffing and/or poker to Vesper, who seems pretty clear on both concepts.