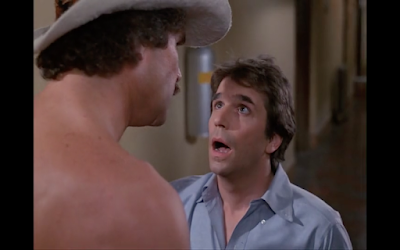 In the 1980s, according to the movies, it was every man's dream to become a pimp. Or a “business manager.” Or, as Billy Blaze so eloquently puts it in Night Shift, “Pimp is an ugly word. We could call ourselves 'love brokers.'” So, as a young man in the '80s you either wanted to get laid (Porky's, Revenge of the Nerds, My Tutor, et al.) or you wanted to help other people get laid (Night Shift, Doctor Detroit, Risky Business). Cocaine and sex. Life was so much simpler back then.

The opening frame of Ron Howard's Night Shift shows a woman's legs and high heel-clad feet walking past a shoe store where the camera expertly frames the store's sign to read “Emperor Hoes.” This, set to a catchy theme song written by Burt Bacharach and performed by Quarterflash, lets me know why I put faith in the opinions of people like Brian Saur, John Cribbs, and Brian Salisbury. As the song fades out we cut to a chase scene where two thugs (one being comedian Richard Belzer) are chasing a pimp (obvious from his hat). The pimp is thrown out of a window five stories up and smashes through a basketball hoop. So, within the first five minutes we get Emperor Hoes, Burt Bacharach, and a pimp swish. This movie is for everyone. 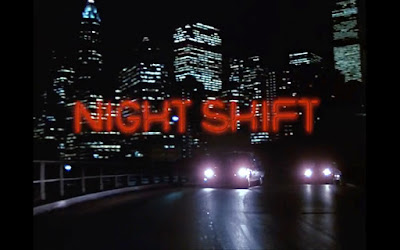 Like Risky Business (which came out one year after this), Night Shift is about two overnight morgue workers with entrepreneurial spirits who end up in the sex worker business. Henry Winkler plays Chuck Lumley who, with a perfect name like that, is obviously an uptight, rule-following, nebbish WASP. Michael Keaton, in his first movie role, is Billy Blazejowski (aka Billy Blaze), the new guy to Chuck's veteran status. Chuck is engaged to another uptight WASP who obsesses over her weight and lets that get in the way of their once-weekly romp in the sack (and by romp I can only guess it'd be the most boring, flavorless sex one could ever experience). Chuck brings his lunch to work, he keeps his ficus in his locker only to bring it out for his shift, and he's happy with his perfectly boring life.

Billy Blaze, on the other hand, is another example of the characters Keaton excelled at playing before getting “serious” in Clean and Sober. Night Shift, Mr. Mom, Beetlejuice, The Squeeze, and even The Dream Team showcased a Keaton we rarely, if ever, see nowadays. He had a manic energy that could have very well been fueled by cocaine (hello '80s!), but by all accounts, it was just pure, unfiltered, Keaton puissance. (According to a 2017 Guardian interview, “Keaton is not a straight Q&A kind of guy; his approach to conversation is a little like his eyebrows, looping in memorable and unexpected directions.”) Billy shows up to work every night with a different pair of hip sunglasses, he's an idea man – feed tuna mayonnaise so you don't have to mix it in yourself, edible paper, microwaved clothing – and after C&B Enterprises takes off he buys a car with a rolodex hanging down from his visor and vanity plates that read IM COOL. Like, say, Zero Mostel and Gene Wilder in The Producers, Winkler and Keaton match each other's energy but from completely different ends of the universe. 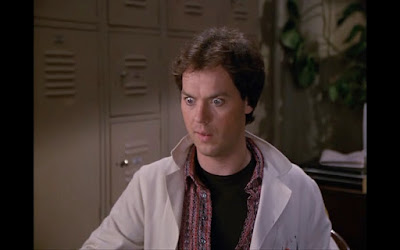 C&B Enterprises takes off when Chuck discovers his neighbor, Belinda – a prostitute – has just lost her pimp (swish pimp). He brings this up to Billy, and as the idea man, Billy suggests they run their love brokerage out of the city morgue during their... you guessed it, night shift (cue theme song!). Belinda is played by Shelley Long, who is typically known for playing dopey, naive, and uptight characters (Cheers, The Money Pit, Camp Beverly Hills). Here we get a different Long. She's more confident, cunning, and open, but as usual, still hysterical and gorgeous. A scene where she cooks Chuck breakfast in her panties and tank top shows us a different side of this woman who was such a big part of my childhood. As is par for the course in movies like this, things come to a head, romantic feelings are expressed, C&B Enterprises ceases to exist, and Joe Spinell shows up as the manager of a sex club. You know, par for the course. 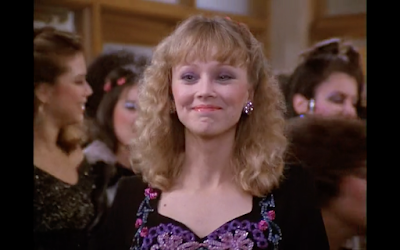 First and foremost, Night Shift is an excellent New York City movie. A scene on a subway car decorated in graffiti has a musician come up and start blowing his saxophone in Chuck's face. When the busker won't leave after Chuck gives him his spare change, Chuck writes the man a check. The movie is exceptionally funny. It would be entirely possible to really dumb it down and go full-on slapstick, but with Howard at the helm (in only his second feature film as director), and Winkler and Keaton as his leads, it stays grounded enough and has heart (think Parenthood). The performances are out of this world. Keaton's insanity, like his other performances of this period, give the whole movie a manic feel. Winkler even won the Golden Globe for his performance. While I think it could stand to lose 15-or-so minutes, Night Shift is charming and funny and doesn't have much to say other than, “Sometimes we just need to have sex and laugh.”
Posted by Patrick Bromley at 5:00 AM