2021 Salem Horror Fest Review: WHAT HAPPENS NEXT WILL SCARE YOU 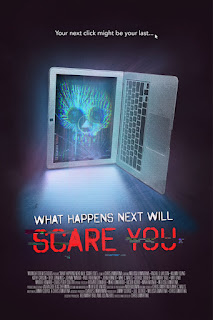 Salem Horror Fest, one of the coolest genre festivals which appropriately takes place every October, is presenting a hybrid festival this year due to the ongoing pandemic. The in-person portion of the festival is in full swing right now and the virtual festival will kick off on October 22nd. This year’s fest includes an impressive lineup of feature films, including films from local filmmakers and a short horror film section, as well as live events.

The creators of the WNUF Halloween Special have a wildly fun new feature playing this year’s Salem Horror Fest. What Happens Next Will Scare You is a horror comedy written by Jimmy George and Chris LaMartina and directed by LaMartina. The film stars Melissa LaMartina, Rachel D. Wilson, Kalima Young, Kathy Carson, Troy Jennings, and Johnny Marra. What Happens Next Will Scare You is an Official Selection of the virtual portion of Salem Horror Fest and will have its East Coast Premiere October 22nd through October 31st. 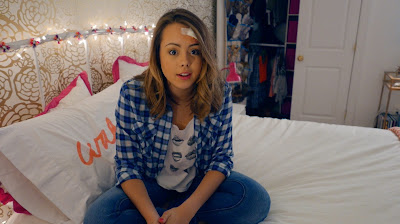 What Happens Next Will Scare You centers around a website called Click Clique, which posts content for clicks, also known in the online world by those of us who are extremely online as clickbait. Click Clique has been lacking clicks and is in danger of shutting down, so the Editor calls a late-night meeting with the journalists. Each journalist is tasked with showing what they think is the scariest video ever made or risk losing their job. There are a total of thirteen videos, which range from the absurd to extremely grotesque and each one has an entertaining story behind it with a comedic twist.

The entire cast does an excellent job of portraying interesting, believable characters, some of whom take the job of presenting the scariest video ever made very seriously, and others who seem to only be interested in pranking the overwhelmed and overworked Editor. One video shows an over-the-top, very funny Sasquatch attack during a traffic stop. Another video follows a mean girl vlogger who loves to make videos about herself but ends up cursed and disfigured.

The most hilarious video tells the story of a haunted teddy bear which an antique shop owner acquired under questionable circumstances. When the teddy bear destroys the shop when the owner isn’t around, he calls in a couple of paranormal investigators who are clearly a parody of Ed and Lorraine Warren. In a hysterical, laugh-out-loud scene, the couple attempt to perform an exorcism on the teddy bear, which doesn’t exactly go as planned. 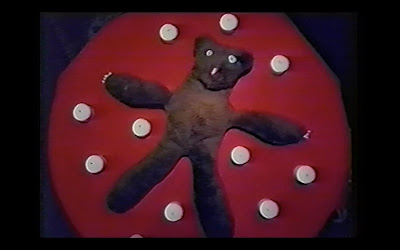 What Happens Next Will Scare You is a supremely fun indie anthology, which features impressive performances, exorcisms, a cursed song, a serial killer clown, and terrific, bloody practical effects. This film is a blast and a must-see if you’re attending this year’s virtual Salem Horror Fest. Grab some popcorn, get comfortable on your couch and enjoy this zany, highly amusing journey. What Happens Next Will Scare You is guaranteed to provide all from the comfort of your living room.
Posted by Patrick Bromley at 12:00 PM

Email ThisBlogThis!Share to TwitterShare to FacebookShare to Pinterest
Labels: 2021 salem horror fest, horror anthologies, what happens next will scare you