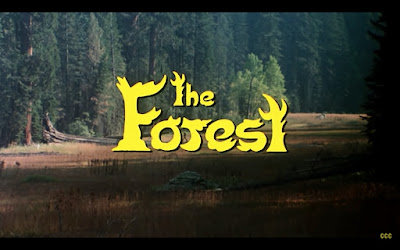 … and what I learned from Scary Movie Month.

If I had gotten into a horrific accident – say, with a circular saw – and ended up losing one entire hand and four fingers of the other hand I could use that singular remaining digit to count how many times I've slept out of doors. To be perfectly honest, I don't know if I've ever slept somewhere that wasn't enclosed by four walls and a roof. But for the sake of this introductory paragraph, let's say I've been “camping” once in my entire life. I love nature. I love animals. I love the wind blowing through the few remaining follicles left on my noggin. I also love mattresses, closed windows, electricity, and warm, feather-filled comforters. So when a movie – a horror movie, no less – takes place in the wilderness, the “wild” of which I'm speaking in of itself instantly becomes the villain. I am not, nor will I ever be, someone that prefers wide open spaces to concrete and tall buildings and honking horns. I feel safer walking the streets of Chicago or New York at 2am than I do sitting on a lawn chair by a secluded lake in Oklahoma at 2pm. 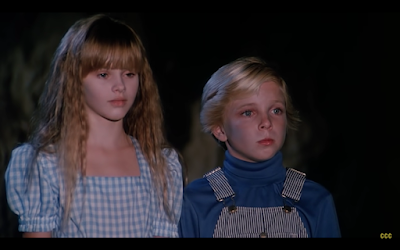 The Forest is one of those early '80s movies that feels like a holdover from the '70s. It's as if studios backlogged cheap flicks in the late '70s so they could flood markets with ripoff genre flotsam, preying on, not unlike the victims in these films, teenagers and young 20-somethings. That isn't to say The Forest is bad. It isn't good, but it does what it's supposed to do while trying to incorporate tabloid headlines in the process (abusive mothers, crimes of passion, murderous fathers, ghost children, cannibalism). The dialogue in The Forest sounds like it was written by two 14-year-olds who had just smoked pot for the first time and had to come up with a skit for their drama class.

“I know a place nobody knows about.”
“Why not?”
“Because they don't know about it.”

“Listen, honey. The only backpacking you've done has been in bed.”

And a half dozen utterances of, 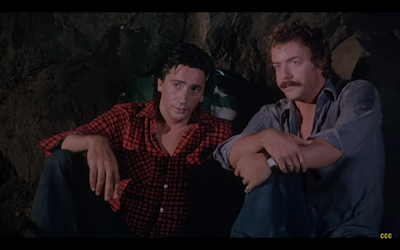 A brief description of the plot is as follows: Two women go camping in a northern California forest. Their boyfriends, a J.K. Simmons lookalike and a Damone from Fast Times lookalike, will join them a little later (because it's supposed to be funny). All four are clearly in their thirties yet act like they haven't even reached sexual maturity. Meanwhile, Gary Kent, dressed like a homeless old man version of Ash Ketchum in the worst wig ever put on screen, goes around the forest killing unsuspecting hikers and then eats them (cooked over a spit in his humble abode: a cave with a single, rotten wicker chair and a gorgeous candelabra). There are also friendly ghost children running away from their abusive ghost mother.

This is a take it or leave it type of slasher that I wouldn't recommend giving your 85 minutes to unless you consider yourself one of those “completists” I hear about so often. Highlights from The Forest include stabbing sounds that I'm positive were just the aforementioned 14-year-olds thrusting rusty kitchen knives into thick jello and dense, dry bales of hay; a song written just for the film called “The Dark Side of the Forest” sung by David Somerville that made me want to jam a screwdriver into my ears; fight choreography with weapons including knives, long tree saws, pitchforks, bicycles, and table saws that pales in comparison to that of something you'd see in a middle school production of Seussical; and the oddest choice of music during said fight scene that sounded like rejected music from commercials advertising pong machines. 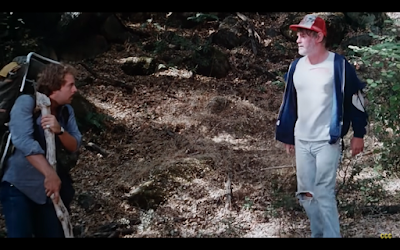 As for #ScaryMovieMonth 2021, I have to say I'm proud of myself. Other than a few evenings where time simply ran out, I managed to slip in at least one horror movie/television special every day. All tallied up, I will have watched 64 things for SMM. Here are the top three things I learned this October:

1. Diet. Don't watch horror movies in September. This saved me from burning out before we reached month's end. This same concept applies to my planned November watching experience (more on that next week). I will also apply this (somehow) to Junesploitation next year.

2. Nightmares. If your child(ren) insist on watching scary movies with you, plan on several restless nights. In the past, Eben (9) has done really well with horror movies. Granted we've gone a little easy with The Ghost and Mr. Chicken, Night of the Living Dead, and Abbott and Costello Meet Frankenstein, but the kid practically begged this year. Frankenstein ('31) was a hit, as were the others, but Scary Stories to Tell in the Dark is the one that stuck and is still causing nightmares. Oops.

3. Schedule. Due to countless fuck-ups in my younger days, I am a meticulous list-maker and scheduler. I love Junesploitation because each day we have a theme. I know a few people on Twitter did the same thing for Scary Movie Month. While I didn't do that for every day this month, I did plan mini marathons each weekend. “You Suck!” (vampires), “Under the Sea” (aquatic horror), and “Child Development: What Went Wrong?” (killers who had awful childhoods) are examples of some of the good minis I did. “Good Morning Baltimore!” (movies filmed in the land of John Waters) is an example of a bad mini I did. The schedule helped me stay on task, and I didn't spend time browsing my shelves or watchlists on numerous streaming services.

I hope you all had a great Scary Movie Month. Now it's time for Sadvember!
Posted by Patrick Bromley at 5:00 AM