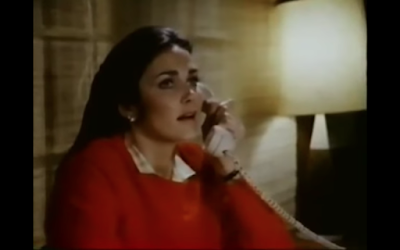 Easing you into Scary Movie Month with a delightful TVM.

I have a bone to pick with MeTV. Up until about a year ago (maybe two years ago; what is time anymore) you could find Lynda Carter in her big, '70s frames spinning herself into that Amazing Amazon on your television screens right before our beloved Svengoolie took to the airwaves. Because of that, I developed an enormous crush on Mrs. Carter and fell in love with Wonder Woman. Now we have to suffer through 90 minutes of The Three Stooges before getting to Sven. That's like asking for candy bar getting square of baking chocolate instead. This is all a roundabout way of getting to the fact that Lynda Carter stars in this week's episode of 52/82 and, spoilers, she's the best! 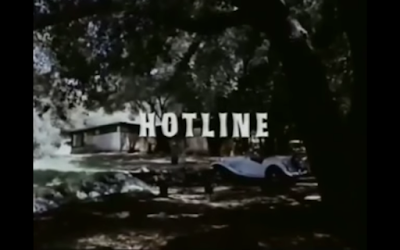 In Hotline, Carter plays Brianne (pronounced Brian), a bartender-student who feels the need to add a third hyphen when she volunteers at the local crisis hotline. While working at the hotline, Brianne receives a phone call from a heavy breather who says he's killed multiple women, and guess who's next? This movie gives your twistiest giallo a run for its money when it comes to the red herring department. After the movie opens with the cloaked/gloved killer dumping a body on the beach, we see Brianne tending bar while fending off a movie star (potential suitor/killer #1) and a drunk (potential suitor/killer #2). After returning home and showering, Brianne is startled when she notices a prowler has been inside her house and a man (potential suitor/suspect #3) wanders through the open patio door and introduces himself as Justin Price, psychiatrist. Justin was “worried” about her and the drunk at the bar and followed her home. He also just happens to run the local crisis hotline, is impressed with how she handled the situation, and invites her to volunteer at the phone bank. She accepts the position, gets the heavy breather on her second shift, and the rest is history.

Hotline originally aired on CBS on October 16, 1982 at the height of the slasher craze and when made-for-tv movies were weekly events. In Amanda Reyes' fabulous TV movie compendium, Are You in the House Alone?, she writes about how “phone terror” was a device used for TV horror films because they couldn't show the more exploitive elements of theatrical horror – blood and boobs. Riding on the success of films like Black Christmas and When a Stranger Calls, TV movies like Hotline, Someone's Watching Me, and Are You in the House Alone? used “phone terror” to its fullest potential. And, agreeing with Amanda here, Hotline is the best out of the bunch. 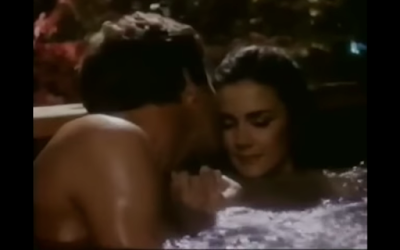 While the movie is great all around, the character of Brianne is interesting enough on her own. She's a bartender at night where she's developed friendly relationships with the aging movie star and his friend (potential suitor/killer #4). During the day she's a full-time art student and, as if she has oodles more time, she works at Hotline at night when not tending bar. When she starts receiving the calls from the killer, Brianne takes it upon herself to become a detective. She brings her concerns to Justin who blows them off by saying she's overreacting. Brianne then gets a do-it-yourself phone tapping device, starts recording the calls, and does research based on the riddles the killer heavily breathes into the phone. “You're turning into a cross between Mother Goose and Sherlock Holmes,” Justin tells her. And as far as bosses go, Justin, while ultimately likable, is the worst. He doesn't believe Brianne when she says she feels threatened, he stalks her to “protect” her, and he eventually beds his new employee. After flying out of town to do more detective work, Justin again accuses her of overreacting, and then prescribes her the best medicine: “A nice bottle of wine and long soak in the hot tub.” With him. Presumably naked. 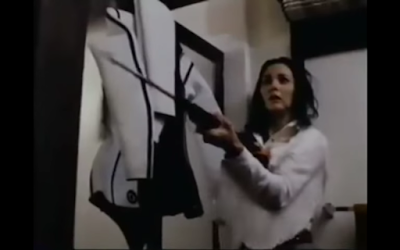 Speaking of the killer, I would be shocked if this wasn't even a little bit of the inspiration for Jigsaw in the Saw movies. *Extreme Riske impersonating Jigsaw voice* “Ready to start the game?” (“Where are you, Shawnee?”) As the red herrings are lined up, the movie does a great job at distracting us with one hand while the other introduces another potential suspect. When the real killer is finally revealed, and boy howdy is it a humdinger, we're treated to an earned and thrilling conclusion.

Some people may want to jump right into the pits of blood and guts and hypodermic needles for Scary Movie Month. Some have been going hard since September 1. And many celebrate year round. But for those of you who want to slowly wade into the terror-filled waters of October might I suggest a day filled with TV horrors. And head to YouTube (the only way to see this gem) for one of the most entertaining TVMs to bless the small screen.
Posted by Patrick Bromley at 12:00 PM