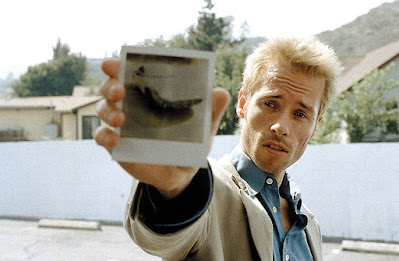 Nominated for Favorite Movie Poster of the Year at the Golden Schmoes Awards.

• Best Scene/Moment: The scene where Carrie-Anne Moss does a full heel turn.

• Best Song: There aren’t too many songs in Memento, so I’ll go with the David Bowie track that plays over the end credits called “Something in the Air.” I don’t think it fits the movie very well, but the song isn’t bad. 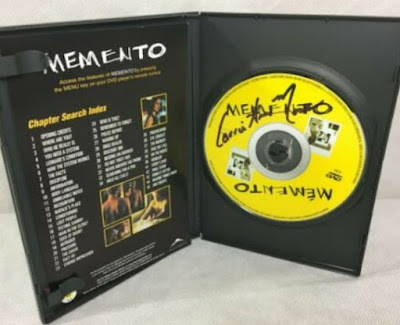 • Best Merch: A DVD of the film signed by Carrie-Anne Moss for $27.67. But why did this person have her sign the actual disc and not the DVD’s slipcover?

• Director Check: Memento was the breakthrough hit (both critically and financially) that accelerated the career of writer-director Christopher Nolan, who previously made 1998’s Following and a few short films. Nolan continued in the crime thriller realm with his follow-up, 2002’s Insomnia before finding a lane primarily as a filmmaker of auteur-driven blockbusters beginning with 2005’s Batman Begins and 2006’s The Prestige. I’m hit or miss on Nolan, but I think that might be more of a statement on everything that comes with Nolan (some of his more adamant fans, over-the-top fawning of theatrical exhibition/70mm/IMAX especially during a pandemic, etc.) than the actual films themselves. I haven’t seen Following but I’m a fan of most of his work up through 2010’s Inception. He started to lose me a little after that with The Dark Knight Rises, Interstellar, Dunkirk, and Tenet, all of which I’m either not a fan of or mixed on. I wish he would make a few more mid-budgeted crime movies. He’s good at them.

• Double It with This 2001 Movie: Mulholland Drive

• Year 2001 Movies to Trailer Before It: Don’t Say a Word, Novocaine, The Tailor of Panama 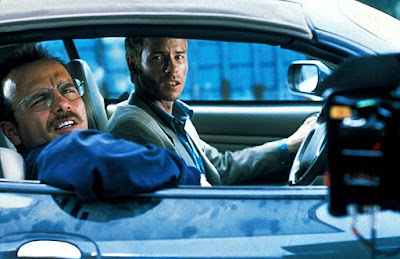 • Mall Movie? I’m going to say yes because it’s a hip indie more than a prestige indie. The cinephile kids would’ve been talking about this one at Sbarro.

• I Miss (tie): I miss when Carrie-Anne Moss and Joe Pantoliano were each in about 3 movies a year from 2000 to 2006 following their Matrix bump.

• I Don’t Miss: Nonlinear narratives. I think it works in Memento, but it feels like there was a time when every other movie used one even when they didn’t need to. I especially hate when a movie is like “Stop. Let’s go back…” How about no?

• What I Thought in 2001: I was pretty blown away by Memento when I saw it in theaters back in 2001. I was very into independent cinema at the time and more than ready to dig into a trippy film like Memento. I remember trying to watch the movie in linear order once (all the black & white sequences in order followed by the color sequences in reverse) and thinking it exposed how brilliant the editing and writing of the film was in its release form and how much less impactful the story was when it was told straightforward.

• What I Think in 2021: I wasn’t expecting Memento to hold up as well as it did in 2021. I found it to be really entertaining and still ingeniously put together. I have a bit of a Guy Pearce allergy (the way he says “Sammy Jankis” gives me the hives) but everything/everyone else around him I like which helps. I miss early career Christopher Nolan. He should make more R-rated movies.
Posted by Patrick Bromley at 5:00 AM