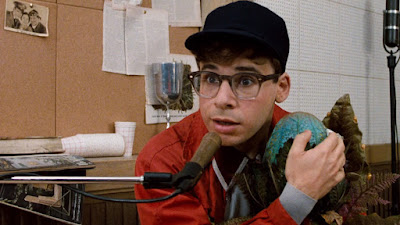 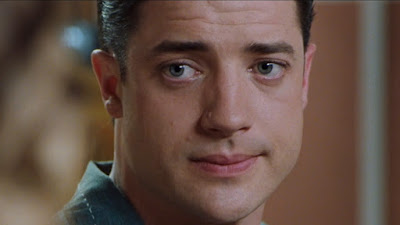 Rosalie Lewis: I know it's basic to like Brendan Fraser these days, but I'm not saying this for cool points. Adam Weber, the character he plays in 1999's Blast From the Past, grows up in a fallout shelter because his dad is a paranoid scientist who overreacts to the Cuban missile crisis. When he finally emerges into the world 35 years later, he's naïve, impressed with everything from a small child to the sky to people of other races, and the best goddamn swing dancer you ever saw. He wins the heart of Alicia Silverstone's Eve in spite (or maybe because) of his obsession with Perry Como, his old fashioned manners, and his sexual inexperience. This movie came out in 1999, the year I turned 18 and moved away from the religious cult I'd lived at with my family for my entire adolescence, and while I'd seen the sky before, it definitely gave me culture shock to be on my own in the world for the first time. Unfortunately, I'm not a dancer -- that was forbidden in my sheltered childhood -- but there were a lot of other aspects of this story and character that resonated with me. Besides that odd personal connection, I just love how much Adam appreciates the little things and cares so deeply for others even if his attempts to be kind can be misinterpreted as insanity by modern society. When Adam sees the ocean for the first time and plunges into it in unbridled joy, I'm moved to tears every time I watch. The world is truly a beautiful place, especially when it's been off limits for so long. 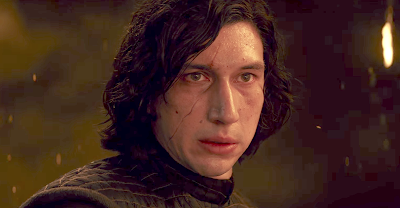 Rob DiCristino: Since I’ve already dedicated an entire column to Clarice Starling, my all-time favorite movie character, I’ll go with Kylo Ren, perhaps the one wholly successful element of Disney’s Star Wars sequel trilogy. Young Ben Solo’s obsession with his grandfather’s legacy — his relentless need to style himself after and behave like Darth Vader — is a powerful commentary on the ways in which we mourn our childhoods through nostalgia and process our insecurities through anger and resentment. Though many fans wanted Luke, Han, and Leia’s cinematic return to be a rousing victory lap, Ben’s presence complicates that picture, casting our heroes instead as absent parents and failed mentors. His final moments with his father are among the darkest in any Star Wars film: The young man is being torn apart by his inner conflict. He loves his parents, but he cannot forgive them for their abandonment. He feels pulled to the light side of the Force, but he cannot let go of the centering power of hate. He begs Han Solo to solve this puzzle, to help him do something so unforgivable that the choice will be made for him.

But even after slaying his father, it’s not until The Last Jedi that Ben becomes truly lost. Luke Skywalker’s betrayal — the moment of doubt and weakness that nearly drove him to kill his nephew — hurt far more than anything Han could have done. Luke was the true father figure, the teacher properly equipped to balance the power brewing inside of his young apprentice. But Luke’s myopic focus on his ego and obsession with carrying on the supposed “legacy” of the Jedi compromised his empathy. He became yet another source of conditional affection for Ben, someone for whom he needed to play a part and serve a purpose. That’s not love. It’s not compassion or acceptance. And so why wouldn’t he retreat into fear, into the juvenile feeling of power offered by the First Order? His final undoing on Crait is an onslaught of trauma: His father’s ship buzzes above him like a gnat, his teacher toys with his rage (which, since Luke is not physically there, is completely useless to Ben), and the girl he may have loved — his final link to the light — closes the door on him forever. Yes. Forever. We don’t talk about The Rise of Skywalker. 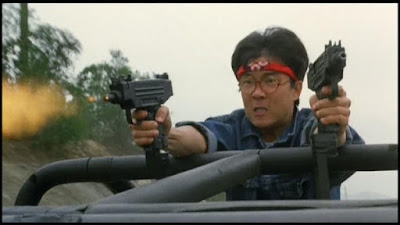 Anthony King: We love a good, loyal sidekick around these parts and these are two of my favorites. I first saw the Brandon Lee-Hong Kong actioner Legacy of Rage (1986) about five years ago and the character of Hoi (Mang Hoi) has stuck with me ever since. Hoi first meets Brandon in prison and sticks by his side after they’re both released. As Brandon goes on an explosion-filled, revenge-driven killing spree, Hoi is right there with him with uzis in both hands. As far as sidekicks go, Nicely-Nicely Johnson from Guys and Dolls (1955) is about as loyal as they come. With a giant heart and possibly the greatest 11 o’clock number in musical history, Nicely-Nicely sticks by Nathan Detroit through thick and thin, never faltering, offering sage advice and gentle guidance, getting his friend through the worst of it. 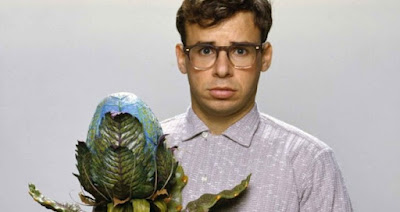 Robyn Buckley: My first favorite character should come as no surprise to anyone who reads F This Movie!. As I'm nothing if not completely predictable, it's Seymour Krelborn as played by Rick Moranis in Little Shop of Horrors. He's sweet, cute... maybe slightly evil (it's not his fault)! Seymour is a pure soul who just wants a better life for those he loves. And he's willing to feed people to a hungry plant to get that. If that's not devotion, I don't know what is!

My second favorite character is from a movie I only discovered a few years ago and I immediately fell in love with the actress, Joan Blondell. 1933's Footlight Parade is an incredibly fun pre-Code musical starring a who's who of early stars: James Cagney! Dick Powell! Ruby Keeler! But the breakout is Joan Blondell as Nan, secretary to Cagney's harried director. She is clever, hilarious, and absolutely biting to those who waste her time. Nan is in love with her boss, but also willing to call him out when he's going too far. For a character from the '30s, Nan feels modern.

Check out both of these movies if you haven't and fall in love with these characters! 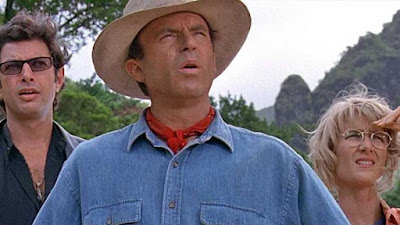 Adam Riske: One of my favorite movie characters is Dr. Alan Grant played by the great Sam Niell in the Jurassic Park franchise. I know this character has resonated with me strongly over the years because it's him I'm eager to see again most as we await 2022's Jurassic Park: Dominion and not...you know, dinosaurs. So why do I like Dr. Alan Grant so much? Because he's not trying to be cool and that makes him cool. He's moral, fair, understated, wryly funny, and dependable, but not without a prickly, grumpy side to him. I like that this is an intellectual that the franchise elevated to its hero. Now he's just got to find a way to get Dr. Ellie Sattler back. In this age of IP-driven fan fiction, I suspect I might end up getting my wish. 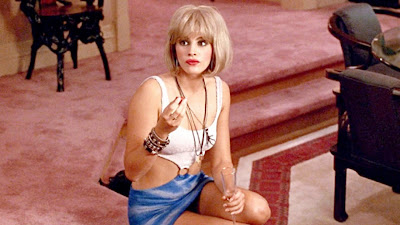 Erika Bromley:  When Patrick suggested this idea for a column, I immediately started thinking about some of the "Great" characters and performances of our entertainment history. Like all of us, the way I was raised, the experiences of my life, the people I've met, the books I have read, etc. forged my sensibilities in a way that none of us can truly ever figure out, right? Art is subjective, and we can never fully and properly unearth all of the ingredients of what makes us 'us' in terms of what we like, respond to, become emotionally attached to, and so on. So for whatever reason, when I start thinking of favorite characters, I think of the classic, favorite films I was raised with, stocked with incredible and often award-winning performances. Yet... for every powerful De Niro performance, there are the kids in Super 8 who break and bend and mend my heart with every look and line delivery, both making me reflect on my childhood and think of my own kids, now almost 13 (any day now, depending on when this piece runs) and 9. And there's a young Julia Roberts in Pretty Woman or Mystic Pizza (there's also the pizza in Mystic Pizza... when are we going to run a column about best movie pizza?) who's ebullient screen presence is sunshine on the gloomiest of days and reminds me of why I love even the non "awards season" star vehicles. When Julia Roberts smiles in Pretty Woman, everything in the world seems like it will be ok. It's escapist fantasy fun -- even if my mom did not approve of the 'message' back in 1990 (but thank you for buying me the VHS, Ma -- and letting me watch it every day for a while!). We believe in Roberts's earnest and cheerful portrayal of Vivian, and so we buy into the entire premise. Pretty Woman is a movie I can leave on at any time: it fits a good mood, and it improves a bad one, and while every player -- even down to the one-liner performances -- contributes a great deal to its success, Roberts makes it shine. 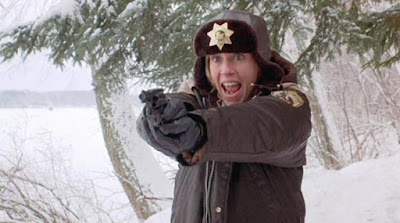 Patrick Bromley: The history of cinema is lousy with screen cops, but none of them better than Marge Gunderson, the character Frances McDormand brings to life in her Academy Award-winning turn in The Coen Brothers' Fargo. Though not introduced until roughly 40 minutes into her own movie, the very pregnant Marge rules precisely because she's the antidote to most movie cops: cheerful instead of grizzled, optimistic in the face of impossible cynicism. She can't comprehend why the men she encounters -- Jerry Lundegaard, Mike Yanagita -- would keep lying to her, but she's a good enough police officer to recognize when they are. She's the morality in an amoral universe, and the love she shares with her husband Norm ("I'll make you some eggs") and their unborn child provides hope in a world in which hope is in short supply. People lie, they kidnap, they betray, they even murder, and for what? For a little bit of money. And it's a beautiful day. Marge's decency, her competence, her optimism, her intelligence, her cravings for Arby's -- all of these qualities make her my favorite movie character of all time inside one of my favorite movies of all time. She's the absolute best.
Runner up: Snake Plissken
Posted by Patrick Bromley at 5:00 AM

Email ThisBlogThis!Share to TwitterShare to FacebookShare to Pinterest
Labels: blast from the past, fargo, favorite movie characters, jurassic park, little shop of horrors