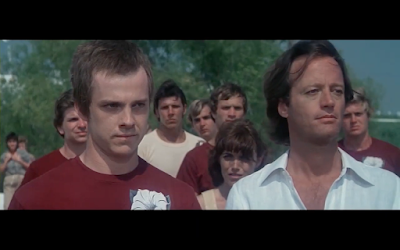 Or the de-indoctrination of Michael O’Keefe by the psychopath James Woods. 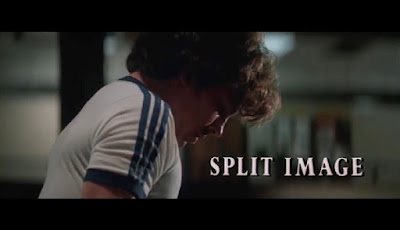 Case in point: James Woods. A short and simple yet nightmarish scroll through his Twitter feed will tell you all you need to know about this smoldering trash heap... er, human. I damn well know who this man is. Yet I'm invariably transfixed by his performances. Movies like Casino, Cop, Night Moves, Videodrome, Vampires, The Hard Way, Once Upon a Time in America, Split Image and every other movie this man is in we get the most electric performances. I don't know if James Woods is a great actor, but there is zero argument to make against the fact that he always delivers something that will affect the viewer. Now, pardon me as I go wash my mouth out with soap and head to confession for saying something [true] that fills me with guilt. Tricky roads and slippery slopes.

As President and CEO of Sadvember, Split Image is a genre-bending, heart-wrenching depression chamber of a family drama. Michael O'Keefe is standout college gymnast Danny Stetson. Raised in affluence, Danny's childhood and family life seems cold and sterile with Brian Dennehy and Elizabeth Ashley as his parents. One day on campus a beautiful young woman catches Danny's eye and invites him to a movie night at the community center where she works. The beautiful young woman? Karen Allen as Rebecca. (Side note: I would do whatever Karen Allen asked of me, including but not limited to joining a cult.) Rebecca invites Danny to a weekend retreat at a place called “Homeland” where we meet our Jim Jones: Kirklander, played by Peter Fonda. Over the course of the weekend, Danny drops all skepticism of “Homeland”, gets the worst haircut you've ever seen, changes his name to Joshua, and leaves behind his old life. Mom and Dad are concerned and hire Charles Pratt (Woods) to kidnap Danny/Joshua to undo the brainwashing done by Kirklander and Homeland. 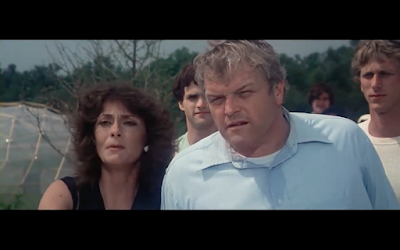 Directed by Ted Kotcheff the same year he did First Blood, Split Image is full of performances just as electric as Woods'. O'Keefe is a tortured young man who yearns for a loving family – something he never received as a child. At first Danny comes off as cocksure, a young man who thinks he's witty when really he's just being a dick. As we learn more about Danny and his family and we meet more of the principal and supporting players, we come to the realization that Danny is the only likable person in this story. Everyone else is either dead inside or bananas in the brain. Dennehy and Ashley play two parents I don't wish upon my worst enemy. Kotcheff is able help us visualize and feel what it would be like to grow up in that house with those people. It all comes through in the performances, and Dennehy's portrayal of a man who feigns heartbreak and love for his son (very well, mind you) yet doesn't truly believe and feel these things is unforgettable. As cult leader Kirklander, Fonda yet again shows us how he can transform into any character to give us a genuinely haunting man. Kirklander's outer calm demeanor doesn't quite mask the monster lurking on the inside, and his prolonged, silent stares will cause a chill to creep up your spine as you realize there are actual people out there like this. 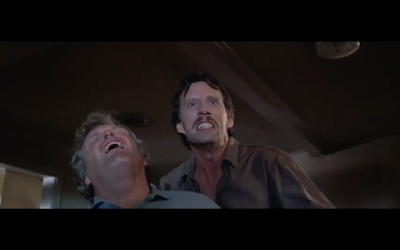 And then we have Mr. Woods as Charles Pratt, the greed-driven man hellbent on destroying Kirklander. Kotcheff unleashes Woods to go absolutely ballistic on every single character in this movie. Pratt is a huckster, and the film doesn't hide that fact. He gets the job done, but it's all in the name of money and fame. He doesn't care about the victims of Kirklander's brainwashing. He doesn't care about the families whose loved ones are stolen. And during Pratt's undoing of the brainwashing, Kotcheff films it as if the victim is an animal; distorted audio and fisheye lens. The flashing imagery of Pratt as a demon is proof in the pudding that this man is legitimately sadistic.

Split Image deserves an entire podcast discussion because it's rich in so many ways: themes, performances, techniques. But lo, I'm here hardly skimming the surface and apologizing for my affinity for James woods. And I leave with this question on my mind: between this, Gymkata, Never Too Young to Die, and a few others, what was our fascination with gymnastics in film during the '80s?
Posted by Patrick Bromley at 5:00 AM