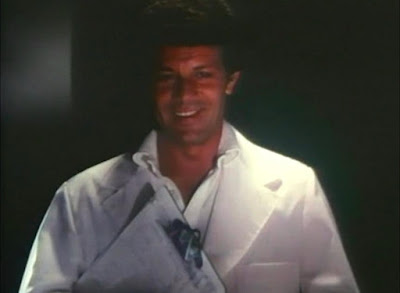 For the past five-or-so years, Christmas Eve has always been my night for holiday horrors. While assembling Santa presents (we don't wrap ours) I throw on something like Silent Night, Deadly Night 1 & 2, Christmas Evil, Rare Exports, A Christmas Horror Story, or Black Christmas. As the years tick on, though, the holiday horrors are unboxed a little earlier and now I mix in yuletide screams throughout the entire Christmas season. Cut to: my wife and I in bed last Saturday night with the Shudder app open on our Fire TV. Bobbie's first choice was Santa's Slaves, but to her disappointment she misread the title and it was actually the original Indonesian movie Satan's Slaves. Instead we opted for Silent Night, Deadly Night 3: Better Watch Out, wherein Bill Mosely (as Ricky Caldwell) awakens from a coma and stalks a blind girl to whom he is psychically connected. This, then, led me to moving up a movie on my 52/82 list which would have been covered in February because it makes the perfect double feature with SNDN 3. 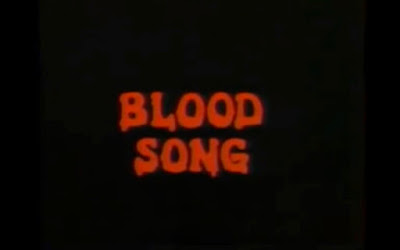 In his illustrious career known primarily for being a dreamboat (he literally played "Teen Angel" in Grease), and, of course, for being a silky smooth songbird, Frankie Avalon has appeared in exactly two horror movies. The first, Horror House, came out in 1969 when Frankie was at the height of his dreamboat days in which he plays a victim. The second, and the movie to which I've been alluding, is Blood Song, released at not the height of Frankie's dreamboat days (although he's still very handsome in 1982) in which he plays the killer. “Teen Angel as the killer in a slasher movie?” I hear you ask. “Yes,” I respond, dryly. “And he plays it very well, actually.”

Blood Song opens with a boy witnessing a horrific crime (a la Pieces, a la Silent Night, Deadly Night, a la hundreds of other slasher movies), in this case the murder/suicide of his mother and father. The boy then pulls out a recorder and starts playing a song like nothing ever happened. We jump several years in the future and now Marion (Donna Wilkes) is getting out of bed, putting on leg braces, and heading downstairs where her abusive father slanders her and her mother and is all around abusive and oppressive. The leg braces are a result of Dear Old Dad's drunk driving accident that crippled his daughter. Meanwhile, the recorder-playing boy has grown up to be Paul Foley (Avalon) and has escaped the mental institution where he lived his whole life. Paul goes on a killing spree, heading for the town where lives a girl to whom he feels drawn. A few years prior, that girl, Marion, needed a blood transfusion because of a horrific car accident, and now she's seeing visions of a psycho killer. Who's blood did she get? You guessed it!

The film is entertaining, with an ending that truly surprised me, and well worth your 90 minutes. Being an independent production from the early '80s, there are – unsurprisingly – moments where I guffawed because it reached peaks of ridiculousness that could only happen in independent production from the early '80s. For instance, Paul's recorder becomes his security blanket, which is all well and good. But after playing Brahms' “Weigenlied” with one hand(!) Frankie Avalon says, “Don't you like my music?” as earnestly as one could say such an asinine thing after screeching out a whistle on a hand-whittled flute. You can't do anything but stare wide-eyed with mouth agape thinking, “Frankie Avalon is saying these words a human being actually wrote.” There's also a brief moment where the story tries to humanize the abusive father. After raising a hand to his wife and daughter while hurling insults at them, the last thing I want is to be forced to feel something for this asshole. It feels gross and unnecessary when we know what's ultimately going to happen to Dear Old Dad. 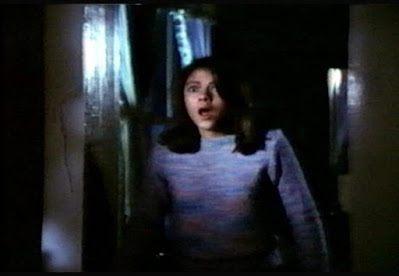 And then we're treated to an original song written specifically for the movie. Like many movies of the time – specifically the cheesy masterpiece “It's a Long Road” from First Blood – the people behind Blood Song felt it needed its own montage of a brooding teenager walking along a Pacific Northwest beach to an epically bad ballad. This one is called “All in Your Mind” (get it?) sung by Lainie Kazan, remarkably enough. But as this perplexing montage winds down to Marion witnessing Paul burying a body, the music seamlessly transitions into some of the best chase music I've ever heard. Again, only in the '80s, folks.

Quick notes on Blood Song:
• It's filmed in Oregon, so naturally we need a scene in a saw mill.
• Paul takes an axe to the belly and continues to chase Marion.
• Frankie Avalon is forklift certified!

After the movie ended I texted my mom and asked, “Did you have a crush on Frankie Avalon?” She responded, “Of course! So cute – loved his beach movies!” I don't want to shatter her image of Frankie by recommending Blood Song. I'm genuinely bummed we didn't get more Frankie in this movie – or more Frankie as the villain in later movies. Whereas Cameron Mitchell's hard turn into cheap exploitation films resulted in lackluster performances and embarrassing moments on screen, I feel like Frankie could've been well-regarded as a king character actor. But alas, we're only blessed with Blood Song.
Posted by Patrick Bromley at 5:00 AM