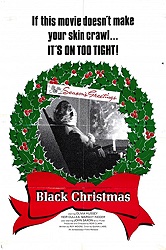 Is this the first slasher movie?

There is no definitive answer as to what the first slasher movie really is. Many point to Michael Powell's Peeping Tom or even Psycho. Some still say it's John Carpenter's original Halloween, a movie which, even if not the first slasher movie ever made can still be called the most influential. It's the movie that producer Sean Cunningham was ripping off when he made the original Friday the 13th, the copycat that launched a thousand more copycats. There has been a push in the last 10-15 years, though, to recognize Bob Clark's 1974 film Black Christmas (aka Silent Night, Evil Night) as the first real slasher, as a clear line can be drawn between it and Carpenter's classic. I tend to agree with the assessment.

It's Christmas time at a sorority house. An unseen killer sneaks in and has a look around (in a POV shot Carpenter would directly lift for the opening of Halloween), then proceeds to make a series of weird and unsettling calls to the women in the house. Over the course of the next few days, the sorority sisters -- including Olivia Hussey, Andrea Martin, Curtains' Lynne Griffin and Margot Kidder -- are killed off. 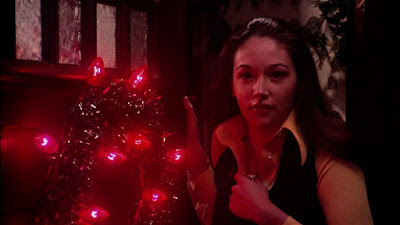 Unseen assailant murdering people one at a time? Check. Young women as victims? Check. A setting that cuts the characters off from the rest of the world? Check. One of director Bob Clark's masterstrokes in directing Black Christmas is just how cold he makes it feel outside, which goes a long way towards creating atmosphere and also contributes to the sense of isolation the movie engenders. I wrote recently in a list of essential Bob Clark movies that he doesn't get enough credit for making some of the best horror movies of the 1970s (and in addition to more or less inventing the slasher genre, he also helped create the teen sex comedy of the '80s with Porky's). Black Christmas truly is one of the best of the decade -- a movie that would be brilliant and important even if it wasn't so influential.

Consider the way that Clark stages the murder of (spoilers) Mrs. MacHenry, the house mother. She is alone in the house, or so she thinks. She calls out to the other girls again and again with no response (the only line of dialogue missing is "This isn't funny..."). She climbs up into the attic and discovers the dead body of one of the girls, asphyxiated by a plastic bag on the head in the movie's most iconic image. Within seconds of registering what she is seeing, she is impaled through the neck on a hook; Clark cuts away just as the hook reaches Mrs. Mac and we hear her screaming off camera. Everything about the shot composition and editing in the scene creates the language of slasher murders for the next 10-15 years, with the only major difference being that later films wouldn't cut away from the hook going into the body but instead make that moment the reason for the scene's being -- slasher films would eventually be more about the possibilities of makeup effects than about trying to scare us. 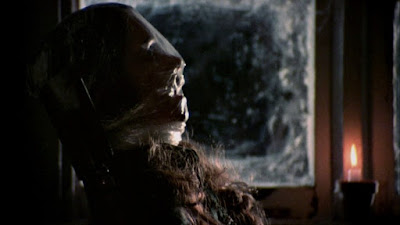 Also established in Black Christmas: the police (read: authorities) are ineffectual. They become involved almost from the beginning when the girls call the cops -- led by none other than the great John Saxon -- after getting the creepy calls. It does not matter. Try as they might, the cops are unable to learn the identity of the killer or stop him before he wipes out almost all of the girls in the house. This is a trope that would carry through many of the most popular slashers that followed, from Carpenter's Halloween (and that's his own daughter that Charles Cypher can't save), the original A Nightmare on Elm Street (John Saxon again), Friday the 13th VI: Jason Lives...the list goes on. The inability of the police to successfully intervene requires Jessica (Hussey) to take matters into her own hands and bring down the killer herself; while it may not have invented the Final Girl, Black Christmas provides us with one of the early examples of a convention that is inextricable from the slasher genre. 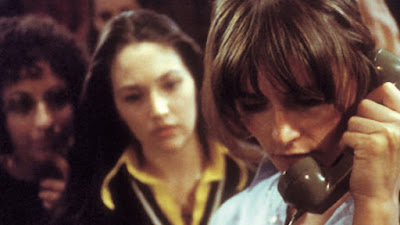 The key component of subsequent slashers not codified in Black Christmas is the "gimmick" of the killer; he makes creepy phone calls, sure, leading girls to dub him "The Moaner," but (spoilers) his identity is never learned. We don't see his face -- at least, not that we know. This is something Carpenter would change in creating Michael Myers -- "The Shape" -- in Halloween, and something that would influence almost every slasher to follow. Memorable masks and/or weapons became the only way that the slashers cranked out during the early '80s boom could distinguish themselves. Would anyone remember anything about Slaughter High if it wasn't for the jester mask? (Ok, yes, and Caroline Munro.) For all the ways that the original Friday the 13th rips off Halloween, this is one aspect in which it holds closer to Black Christmas; the first movie treats the killer's identity as more of a "whodunit," a tradition born out of the Italian giallo film. It wouldn't be until Friday the 13th Part 3 -- four years after Halloween -- that Jason Voorhees would first don his hockey mask and the franchise would find its face.

This would change with the 2006 remake written and directed by Glen Morgan, which created a clear identity for the killer complete with origin and gimmick -- he's severely jaundiced and has a history of murder, having killed his mother and eaten cookies made of her skin when he was just a boy. None of this makes the remake a better movie in any way; to the contrary, it removes the threat of the unknown by telling exactly who and exactly why the caller is murdering the girls in the house. In short, the remake gives Michael Myers a sister. I have not revisited the 2006 version (often referred to as Black X-Mas) since it first came out on DVD. I have been told it's secretly really good, but this is not my memory of the movie. I'll get back to it some day. Probably. Maybe. 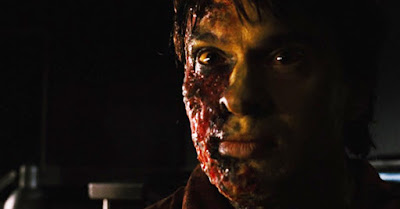 I love Black Christmas, even if it is a lot of people talking on phones. It's partly because it's the rare horror movie that I actually find kind of scary -- those phone calls are legitimately creepy, as we can hear a lot of weird voices and screaming but can't really understand what's being said. It's partly because it's a really well-made movie from a director whose output through most of the '80s and '90s served to undermine the great work he was doing in the '70s for most of the critical community. And it's partly because it helped birth the slasher genre, a subgenre of horror I'm on record as loving despite the fact that there are so few actual good ones. I know that there are movies predating this one that paved the way for slashers; perhaps Clark's greatest achievement in Black Christmas is synthesizing those elements that came before into something that most closely resembles the slasher as we would come to know it. I don't think that's it, though. I truly think Bob Clark was on to something, and the popularity of the genre he had such a large hand in shaping over the next 15 years bears that out. Even if Black Christmas isn't technically the first slasher movie, it remains one of the best.