This month I want to highlight some of my Junesploitation MVPs. First up, John Saxon!

Just like chocolate goes with peanut butter and premarital sex goes with death, some people seem like they were made to be in B-movies. John Saxon is such a person. He’s probably most recognizable as Nancy’s dad and the police lieutenant in several entries of the A Nightmare on Elm Street movies, but he’s got a face that has popped up just about everywhere. Even your average TV or movie fan would know his face from numerous appearances on shows like The Six Million Dollar Man, The A-Team, Fantasy Island, and the pinnacle of mustachioed-cool, Magnum P.I.. He’s THAT GUY, the dude you see in just about everything. He’s been in a dozens of good projects and at least a hundred that totally sucked, but that’s all part of the fun because I can guarantee you this: if John Saxon is in a movie, it’s at least worth watching just to see him. It may be bad, but John Saxon makes it good.

The Sax-man cut his teeth on television westerns during the 1960s, so you know I already love him, but he also got to be in some so-bad-they’re-good exploitation flicks like 1965’s Blood Beast from Outer Space (the title makes sure you never have to wonder what it’s about) and American International’s space horror Queen of Blood. But starting with the 1970s, he ended up appearing in some bona fide classics of the exploitation persuasion. Even though it’s a TV show, Kung Fu brought us another great Junesploitation star in David Carradine, and John Saxon did a guest spot on that series, giving us two awesome stars for the price of one. The biggest, baddest movie he was in during this era (ERA) for me is the legendary Bruce Lee film Enter the Dragon. He followed that one up a couple of years later in Bob Clark’s Black Christmas before going on to star in a string of Italian exploitation films and even the beesploitation movie The Bees, which JB just recently reviewed. Remember, it may be bad, but John Saxon makes it good. 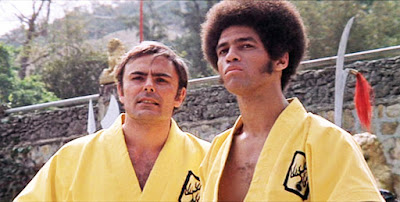 I can’t even begin to list all of the exploitation films that John Saxon was a part of and that I’d offer up for your consideration this month. He’s been in so many that I’m not even close to having seen all of them myself. There’s Roger Corman’s Battle Beyond the Stars, which came out after Star Wars and offers the space opera experience on a shoestring budget. Check out Patrick’s review elsewhere on this site, but remember…it may be bad, but John Saxon makes it good. There’s the Vietnam-vets-turned-cannibal movie Cannibal Apocalypse. There’s Blood Beach, which is kind of like a proto-Tremors and features something attacking people from under the sand (Sax on the beach). There’s Prisoners of the Lost Universe, which co-stars Richard Hatch from both versions of Battlestar Galactica. There’s The Big Score, which is a Chicago drug crime movie (Sax and the city) and co-stars Fred Williamson (who also directed!) and Richard “Shaft” Roundtree. A couple of Junesplotations ago I even watched My Mom’s a Werewolf which wasn’t horror at all but was more like family comedy. It was pretty bad, but it had John Saxon in it, so it was still good. 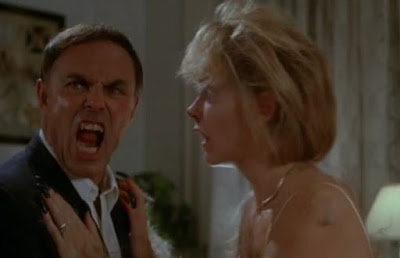 I’m not quite sure what it is about John Saxon that I love so much. Maybe it’s the scientifically-proven fact that he’s awesome? I bet that’s it. Or maybe it’s because he’s been in so many projects I enjoy that I’ve come to associate him as some sort of weird stamp of entertainment value. Let me paint a picture for you about how Saxon can save the day. Say you’re a producer or a director and you’ve got some no-name stars--one is your wife’s cousin and the other is a college drama major who responded to your ad on Craig’s List. They’re lined up to be in your movie about a marshmallow monster that rapes and then eats people in an alley. BTW, the monster is called “Smorgy.” You’ve got six thousand dollars and a latex puppet as your creature (you hope the marshmallows and blood hide the fact that it’s a hand puppet), so you know you’ve got to step things up if you want anyone besides your mom to watch your movie. What do you do? You hire John Saxon. INSTANT CLASSIC. The fan appreciation just comes rolling in! Lines at conventions to meet you are wrapped around the block, and you have Saxon to thank. He’s a comforting presence, and he almost always stars in the kinds of movies and television shows that I really enjoy watching. There aren’t a lot of deep, existential, angst-ridden drama films on his resume; he’s all about action, being a tough guy, and doing what had to be done. He’s a MAN! It’s not wise to look directly at him, or you could get hurt. What I’m saying is that unprotected Sax is a big risk and you should avoid it. You’ll want to have unprotected Sax, too. He even did some nudie pics way back when, so if you look around, you can find pictures of the Sax man hanging dong. And you know what? At 80 years old, he still looks like a force to be reckoned with. 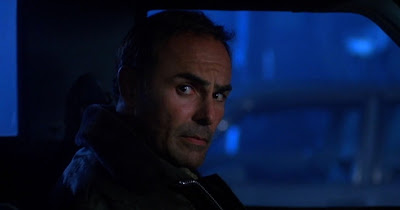 I feel really lucky that Junesploitation has once again come along at just the right time to save us from the self-important Hollywood machine. I’ve got all month to dig into the delicious cheesy goodness of John Saxon and all the other exploitation superstars that I will be spotlighting over the next few weeks. In the meantime, remember this: when you see John Saxon in a movie, you know what you’re going to get. And if you’re considering a movie that he’s in but wondering if it’s worth your time, you can rest assured that even if it’s bad, John Saxon makes it good.
Posted by Patrick Bromley at 12:00 PM

Email ThisBlogThis!Share to TwitterShare to FacebookShare to Pinterest
Labels: a nightmare on elm street, enter the dragon, heath holland on, john saxon, junesploitation 2016