Part 2: Midnight at the Magnolia

Alison: Midnight at the Magnolia is what I would imagine a classic Christmas movie to be. A simple plot to follow with only a handful of characters to keep track of – the perfect movie to watch while wrapping presents or addressing holiday cards. While some may chastise the movie for its predictability, I appreciate it. It feels familiar – like so many Christmas movies before it – and brings with it feelings of comfort and joy (sorry, couldn’t resist!)

Our main characters, Maggie and Jack, hatch a “crazy” plan to pretend they are a couple in order to promote their radio show in hopes that it goes to satellite radio. As you may already guess, things don’t go as planned. There’s ups, downs, and a scene full of sparkle and glitter. I found the characters to be relatable – so much so that I teared up a few times (okay, more like ugly cried), which is unusual to do during a Christmas movie. I was surprised at how real some of the situations the characters found themselves in were to me. 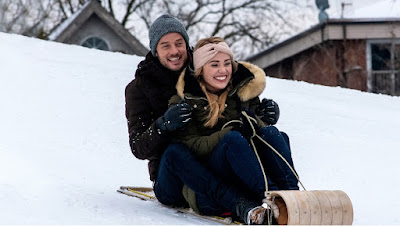 Adam: The opening credits show two people getting ready for work, we are introduced to Maggie Quinn (Natalie Hall) an attractive early 30s blonde, dressed for success and going through her strict morning routine of breakfast and coffee while heading out the door. These are then juxtaposed next to images of Jack Russo (Evan Williams) oversleeping, throwing things together at the last minute, and barely making it to work on time. Oh, and how cute, they have a radio show together. I knew how this movie was going to go and had every beat placed out in my head and we were only five minutes in, and by the end I was completely right. However, there is a difference between doing predictable and doing predicable well. Midnight at the Magnolia took something that was very formulaic and added enough touching scenes that it now holds the record for a “3” on the “Alison Cry-o-Meter.” I love my wife dearly, and it's usually a given that she will cry once during a movie, maybe two times on a good one, but 3 is truly rare! 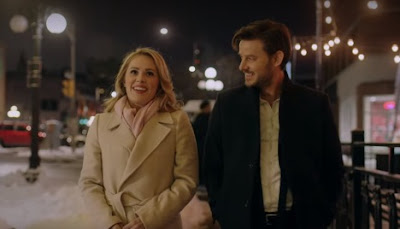 Before I sound like I’m sending too much love toward Midnight at the Magnolia, there is an odd undertone to the entire movie that makes it feel very dated. In the movie, Maggie and Jack’s dads both own a jazz club together, while Maggie and Jack have a local radio show and dream of being on Satellite Radio. While all of these things seem plausible, I couldn’t help but have the feeling that this script was written or conceived of 10 years ago. In contrast, this was one of the first times that I enjoyed the “fashion” aspect of one of these movies. Inevitably there is usually a scene where the main characters need to get dressed up in these films, but it was more the mundane, every day fashions that caught my eye and made it more modern than the overall plot put forward. Midnight at the Magnolia was “fine” and was pleasant as much as it could for a low budget Holiday movie, but it was also unique enough to put it in the middle of the ones we’ve watched through the years.