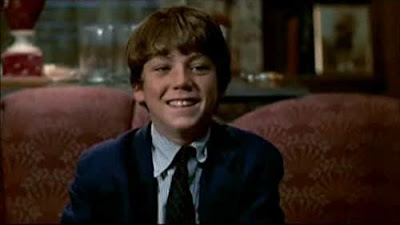 To this day, my favorite part of Pee-Wee's Big Adventure is when he goes into Mario's Magic Shop. The silly little tricks, gags, and props that fill every inch of that little boutique has fascinated me ever since I saw it at the age of four. There's a store we used to go to every Halloween to look at the costumes and masks and props and gags and it's the exact same feeling I got standing in that store as when I watched PWBA for the first time. (Side note: I now live in the same neighborhood as that store and still go and visit to feel that rush.) I will never ever tire of watching magicians perform. From pulling a coin out of my ear to making the Statue of Liberty disappear, I will forever be enthralled by and buy into what these performers are selling me. As a matter of fact, our last big outing before you-know-what was to see The Illusionists, and just like Eben who was seven at the time, I was on the edge of my seat the whole time watching The Mentalist, The Daredevil, The Manipulator, and the rest of the cast entertain the audience. So when I hear about movies dealing with magicians, I'm usually the first in line. Then, more often than not, I'm promptly disappointed. But every so often there comes a movie about magicians that brings out my inner four-year-old and excites me just like the first time we see Pee-Wee walk into Mario's Magic Shop. 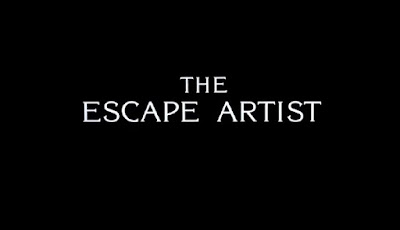 The Escape Artist opens with young Griffin O'Neal walking into a newsroom, asking to speak to the editor, then cutting to him being double handcuffed by M. Emmet Walsh and locked behind bars, followed by the classic, “Yep. That's me. I bet you're wondering how I got here...” and finally hopping into a recent flashback. Griffin is Danny Masters, son of one of the greatest escape artists of all time played by Harry Anderson in his first movie role. Danny is in his mid-teens, orphaned, and goes to find his aunt and uncle who are also magicians. The Escape Artist meanders through this brief time in Danny's life where he mingles with different characters and, after visiting a magic shop, gets wrapped up with Stu Quinones, a small-time crook played by Raul Julia. Stu happens to be the bumbling-yet-unhinged son of the crooked mayor played by Desi Arnaz in his final role. Danny picks Stu's pocket of a wallet containing a fat wad of cash. Stu, though, had lifted the wallet from his father. So now Stu is after Danny to cover his ass before his father disowns him completely.

That's the basic gist of the story, but I have seldom (if ever) seen a movie billed as a comedic crime caper that carries the weight The Escape Artist does. There are movies like The Hot Rock that lean into the thriller side of the caper, but overall spend most of its time in comedic waters. There's The Great Muppet Caper that leans fully into the silly childishness of how a caper could play out. Rarely, though, does a movie combine the classic caper, Marx Brothers vaudevillian comedy, and the melancholy of coming of age stories into one film. Focusing on the comedic aspect first, we have Raul Julia combining Tony Montana and Rufus T. Firefly. Around Danny, Stu is an unhinged psychopath. Around his father, though, Stu is reduced to a silly, nervous child, who at one point sits on his father's lap unexpectedly which forced a full-out cackle from me. Along with his henchman, played here by John P. Ryan in another goofy-tough guy role where he's dressed in flashy suits topped with a fisherman’s bucket hat, Stu spends most of the movie chasing Danny around, ultimately ending with him running around with a knife, threatening the life of this teenager. 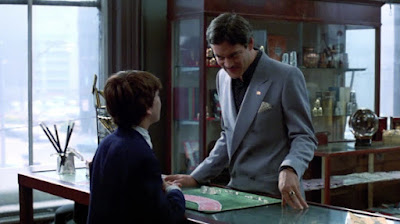 Then we have this coming of age story that lives on the border of melancholy and just downright morose. As you know, I live for this feeling in movies, so I felt right at home here. Griffin O'Neal is just plain cool. In every situation in this movie he plays it cool. He obviously comes from a stupidly talented family, and he's totally aware of it; not in an arrogant way, mind you. That confidence, though, in his talent, his genes, allows him to play the character of Danny Masters exactly how he's supposed to be played: cool, calm, and collected on the outside, and sad and broken on the inside. He showcases this coolness in a scene where he asks out a waitress clearly older than him (played by the great E.G. Daily, in another connection to PWBA) and she accepts. (Another side note: along with Bernadette Peters, Daily and Teri Garr, who is also in this movie, were my first celebrity crushes). The melancholic feeling of scenes where Danny is being introspective dominates the whole movie, which isn't to say is a bad thing. Expecting more of a slapstick comedy, I was thrown off, but pleasantly surprised, and not disappointed in the least. 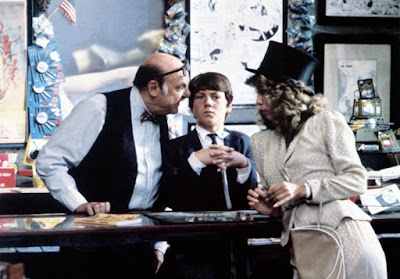 Unfortunately this movie sits in the Warner Bros. vault but can be rented VOD from the usual spots. This also means it's perfect for a Warner Archive release, so here's hoping. The Escape Artist affected me in the most unexpected way, in that I wasn't expecting to be affected one way or another. The movie doesn't end the way some may want it to end. But it ends the way it's supposed to end. And we walk away from this story that combines the comedy of the 1920s and the overall sadness of the 1970s and we're left with a satisfying moral to a story about a kid who is constantly being underestimated.
Posted by Patrick Bromley at 5:00 AM