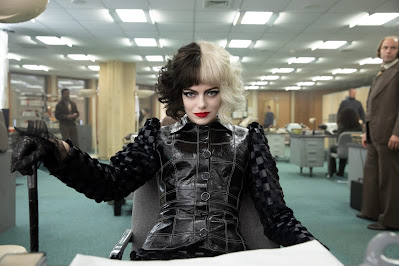 The Undies: Awarding those whom the awards chose not to award. 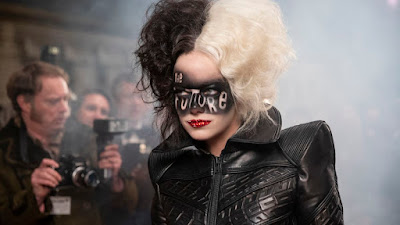 Craig Gillespie’s Cruella is a lot of things, but it sure as hell isn’t lazy. It’s practically Art Direction: The Movie, a full-frontal orgy of vibrant design choices set to a truly irresponsible series of classic rock needle drops. Gillespie directs the hell out of the picture, staging new and elaborate sequences to capture our attention just as we’re starting to ask too many questions about what’s happening plot-wise. The whole goofy mess would border on unwatchable if not for its star, whose dramatic makeup and costume changes magnify an already-captivating screen presence. Emma Stone seems to be taking the frame by force throughout Cruella, every bit a seasoned pro who knows exactly how to work the camera to her advantage. It’s more than just beauty or affect, though; Stone goes gaudy when a scene demands it and then downshifts so we can read the infinitesimal changes in her eyes during moments of vulnerability. Cruella may have been banished to the Disney+ annex, but Stone’s performance is built for the silver screen. 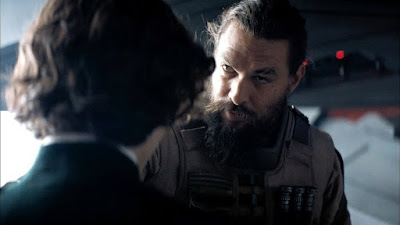 In the years since his breakout role as the nomadic warrior Khal Drogo on Game of Thrones, Jason Momoa has carved out a wonderful lane for himself as a kind of avuncular bruiser, a lovable lug whose heart will always be more powerful than his biceps. He fits right into Denis Villenueve’s Dune, playing the small but crucial role of Duncan Idaho, House Atreides' weapons master and longtime mentor to princeling Paul (Timothee Chalamet). Momoa’s joviality is a welcome contrast to Villenueve’s otherwise unforgiving palette: He’s a warm blanket. A port in a storm. A big, hunky slice of mom’s apple pie. Like Stone, Momoa is learning his angles and making the most of his time on screen — One of Dune’s few moments of levity comes from his comedic timing (“Thank you, Stilgar…”), and arguably its most dramatic action beat (“Sardukar!”) is thanks to our affection for him. Though it seems unlikely that Villenueve’s Dune franchise will tackle Frank Herbert’s sequels, there’s always plenty of room in them for Momoa to make a welcome return. 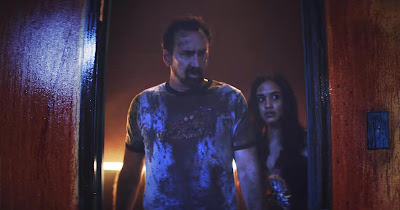 Nicolas Cage gave us two clinics in understated acting last year, both in the critically-acclaimed Pig and Kevin Lewis’ horror-comedy romp, Willy’s Wonderland. Both rely on Cage’s jagged stoicism, but where Pig punctuates it with bits of revelation and introspection — his Robin Feld is a wily soothsayer who speaks the truth and nothing but the truth — Willy’s Wonderland lets him remain a silent instrument of undead destruction, an impossibly cool pinball junkie who lets his work do the talking. Cage’s character (credited only as “The Janitor”) is no hero; he has no motivation aside from settling up with a mechanic whom he cannot pay for auto repairs. The deal is simple: He cleans the ersatz Chuck E. Cheese’s, he gets his car back. No irritating teenagers, small town secrets, or haunted animatronics will veer him off his course. Comparisons have already been made between the Janitor and Wild at Heart’s dashing drifter Sailor Ripley, and it’s easy to see why. Same guy? Distant cousin? Either way, I think David Lynch would approve. 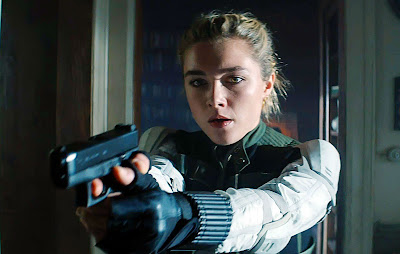 Though I admit to having oversold Black Widow in my review a few months back (It was something new during quarantine. Sue me), we can all agree that Florence Pugh’s turn as pint-sized assassin Yelena Belova was one of its highlights. It’s no great revelation that Pugh is one of the most important performers of her generation, a stone-cold movie star whose charisma and emotional intelligence have earned her a seat at some very impressive tables in just a few years’ time. She’s easily the best part of Black Widow, playing a character who presents an interesting contrast to Scarlett Johansson’s Natasha Romanoff while giving Johansson herself a naturalistic foil reminiscent of her early days in indie cinema. Pugh went on to reprise the role later on Hawkeye (Spoilers? If you haven’t watched it yet, you’re never going to), giving Hailee Steinfeld’s Kate Bishop a delightful frenemy and Jeremy Renner’s Clint Barton some emotional catharsis. Here’s hoping Pugh escapes the Mouse’s thrall sooner than later, though. She’s too important to waste. 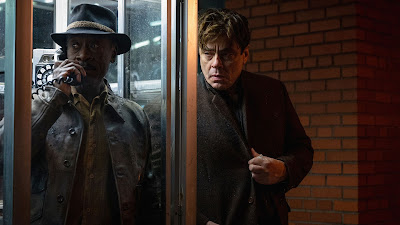 If you’re anything like me, you go through periods of rediscovery in which you slowly realize an artist has had a more profound impact on your taste and style than you’d previously thought. This time, that artist is Steven Soderbergh, whose newest thriller No Sudden Move snuck quietly onto HBO Max last summer to critical acclaim but without much cultural impact. Penned by the great Ed Solomon and featuring an obscene cast of genre heavyweights, No Sudden Move is a sleepy, thoughtful noir that deserved to be on more top ten lists (including my own). The film’s distinct “fisheye” look — in which the edges of the frame appear to be stretched tightly onto the screen — create lighting and optical distortions fully aligned to the film’s genre sensibilities and makes for a fascinating new wrinkle in Soderbergh’s already stylish repertoire. No Sudden Move deserved better than the COVID-panicked steaming era (era) in which it was born, but it’s a prime candidate for rediscovery in a few years’ time. If, you know, we’re all still around by then.
Posted by Patrick Bromley at 5:00 AM