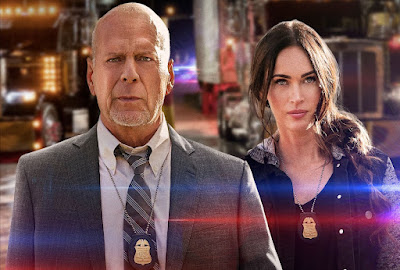 Because art is a competition. 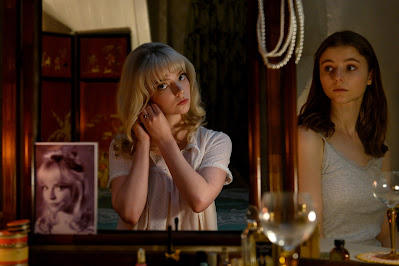 Though Edgar Wright’s recent output continues to lack the storytelling precision of his Cornetto Trilogy heyday, there’s simply no denying that Last Night in Soho is one of the most captivating film experiences in a good long while, a neon-soaked odyssey back in time that mixes genre sensibilities as effectively as anything else in Wright’s repertoire. Thomasin McKenzie gives one of the year’s standout performances as Ellie, a country mouse in the big city yearning to channel the glamorous specter of Sandie (Anya Taylor-Joy) as she climbs the ladder of the fashion world. This is no fairy tale, however, and supporting turns from Terence Stamp and the late, great Diana Rigg serve to illustrate just how deadly Ellie’s obsession has become. By enlisting Krysty Wilson-Cairns as a co-screenwriter, Wright may have been challenging his own cinematic nostalgia, highlighting the very real cost paid by so many young women pursuing stardom. Soho’s messy final act may keep it from true greatness, but it’s still unlike anything else this year. 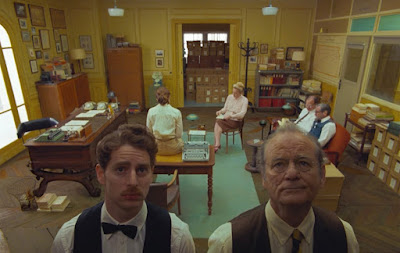 History will likely remember The French Dispatch as a minor entry in Wes Anderson’s eccentric filmography, his lifelong quest to catalog all that is quirky and post-modern. That seems fair, as it trades a feature-length story for a series of interconnected vignettes collected by Arthur Howitzer Jr. (Bill Murray), editor of the titular magazine. But if we consider cases in which Anderson has stretched a charming idiom a bit too thin — such as in Isle of Dogs or The Darjeeling Limited — we might appreciate his restraint. We might instead think of The French Dispatch as a greatest hits album, a whimsical celebration of Anderson’s universe with Howitzer standing in for the auteur in a bit of reflexive commentary: As in all great artistic collaborations, he gathers singular voices like J.K.L. Berensen (Tilda Swinton), Lucinda Krementz (Frances McDormand), and Roebuck Wright (Jeffrey Wright). He protects them, supports them, and gives them a lens with which to observe. The French Dispatch may be made of tiny pieces, but it’s anything but minor. 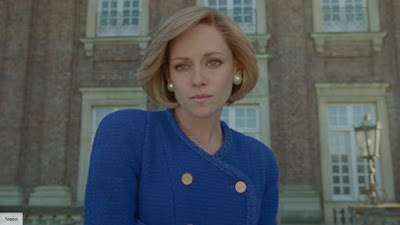 “Where the fuck am I?” asks Diana, Princess of Wales (Kristen Stewart) in Spencer’s opening sequence. Her Highness is driving alone on a country road — already a major transgression of royal protocol — and now she’s lost. She’s been lost for years, it seems, stuck in a marriage she hates and aching to be free of the grand traditions she’s been charged with perpetuating. The shackles of ritual and ceremony are all over Pablo Larrain’s new film, which is less a biopic than it is a claustrophobic daydream that pits Diana against an insurmountable adversary: Christmas weekend with the royal family. Larrain uses wide angle photography and Jonny Greenwood’s scattered, discordant score to emphasize Diana’s encroaching madness, but it’s almost superfluous; Stewart herself is the special effect, here, modulating between the demure Diana she presents to the public, the joyful Diana who schemes playfully with her sons, and the tortured Diana who just wants to scream. It’s a defining turn for Stewart, one of the very best of the year. 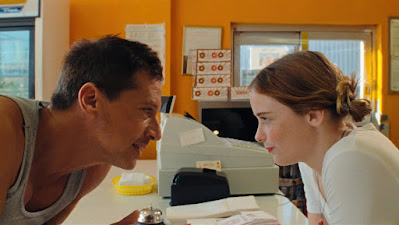 With just a few major releases, writer/director Sean Baker has solidified himself as the preeminent voice of the misbegotten and the misadventurous. Whereas provocateurs like Harmony Korine are content to roll around in the muck with their stock company of degenerates — often to glorious, sun-soaked effect — Baker presents characters teeming with promise, hopeful hucksters who seek to overcome the poor hand life has dealt them. Red Rocket is no different: MTV’s Simon Rex is Mikey “Saber,” an over-the-hill adult film star who returns to his Texas hometown after one too many hustles gets him chased out of the industry for good. There, he meets Strawberry (Suzanna Son in a breakout performance), a doughnut shop clerk with — to put it delicately — star potential. He immediately sets to plotting his comeback, dodging drug kingpins (Judy Hill), deviants (Ethan Darbone), and his estranged wife (Bree Elrod) along the way. Red Rocket is a keenly-observed anthem for all those taking it sleazy, all those who have come to realize that bullshit can only get them so far. 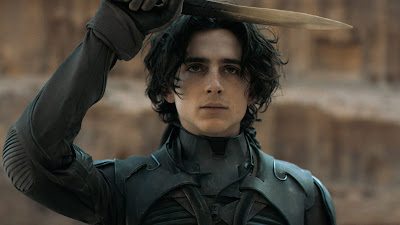 Adapting Frank Herbert’s science fiction masterpiece to the screen has been — and will continue to be — a nigh-impossible task. Mad scientist Alejandro Jodorowsky tried first, with an unrealized attempt documented in 2013’s Jodorowsky’s Dune. David Lynch took the first successful shot in 1984, crafting an unwieldy epic that, while certainly unique, stumbles over itself trying to cram reams of politics, palace intrigue, and mythology into a 137-minute runtime. The oft-forgotten 2000 Sci-Fi Channel mini-series fares a bit better, with a three-part structure more able to carry the narrative weight. While no one has quite cracked it yet, Denis Villenueve has come the closest. His Dune is a sleeker, stripped-down tonal exercise that centers on Paul Atreides’ (Timothee Chalamet) tormented path toward a destiny for which neither he nor the galaxy may be entirely prepared. The first half of Villenueve’s two-parter captures Dune’s essential energy in engrossing, pulse-pounding fashion, setting up what is sure to be a grand finale. 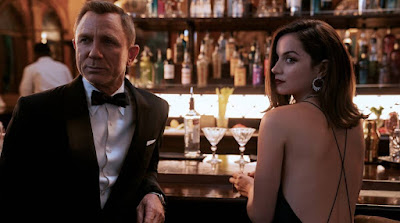 More than worth the wait, Daniel Craig’s final turn as James Bond ended up being just as revolutionary as his first. We often forget that Casino Royale was a bold continuity reset that presented a newly-minted 007 struggling to be more than a blunt instrument in an unforgiving world. Later came Skyfall, a meditation on death, rebirth, and loyalty that tested Bond’s principles and reaffirmed his position as the most important weapon in Her Majesty’s arsenal. No Time to Die takes that arc to its natural conclusion, presenting Bond as a man now fully capable of love, trust, empathy, and sacrifice. It’s a turn sure to upset folks who come to the Bond franchise for testosterone-fuelled escapism, but it’s the one Craig’s been building to all along. It’s proof that cinema’s longest-running franchise is still willing to take risks and explore new avenues. It’s proof that a character once dismissed as a Cold War relic is still worthy of our attention. It’s proof that Daniel Craig’s Bond is a singular entity, the most complex and rewarding interpretation we’ve ever seen. 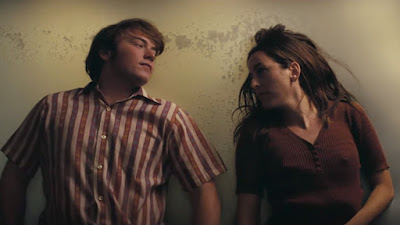 If there are any benefits of advancing age, then one is certainly the wisdom of hindsight. It’s hard to feel the stages of life while we’re living them, and it’s only once we’ve settled into new perspectives that we can reflect on the space between. Paul Thomas Anderson’s newest teenage romp is about one of those liminal stages — an ill-defined place between pubescent innocence and young adulthood. On the latter end is Alana Kane (Alana Haim), a twenty-five-year-old underachiever whose chance encounter with Gary Valentine (Cooper Hoffman), an actor ten years her junior, sends her careening back into the past just as her peers are pushing forth into an uncertain future. But it’s not just Alana struggling to grow up: The gas crisis, the Vietnam War, water beds, pinball, the New Hollywood — Licorice Pizza is set in a place and time in which America itself is struggling with a hostile, ungainly new maturity. Anderson captures it all with chaos and wonder, letting his leads fall just as in love with their messy new identities as they do with each other. 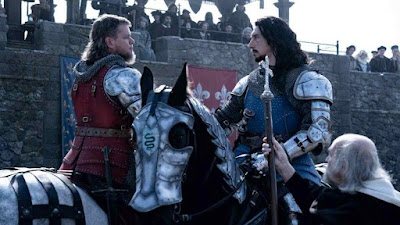 The first act of Ridley Scott’s The Last Duel reads like any other medieval drama: Knights in armor, oaths of fealty, and damsels in distress. When we meet Matt Damon’s Jean de Carrouges, we expect him to be our noble protagonist, a brave man worthy of defending his new wife, Marguerite (Jodie Comer), in a duel to the death against her accused rapist, Jacques Le Gris (Adam Driver). Before any blood-splattered conclusion can conclude, however, Scott rewinds, beginning the story again from Le Gris’ perspective. And then Marguerite’s. We soon realize that this stuffy period piece is actually one of Scott’s signature invectives, an iconoclastic tirade against masculine ignorance and bigotry. It’s an exercise in unreliable narration and a firm condemnation of the power structures that force women like Marguerite to choose between their honor and their lives. These weak, pitiful men preen for the attention of Count Pierre d’Alencon (a gleeful Ben Affleck, who co-writes with Damon and Nicole Holofcener), but serve only their own egos, in the end. 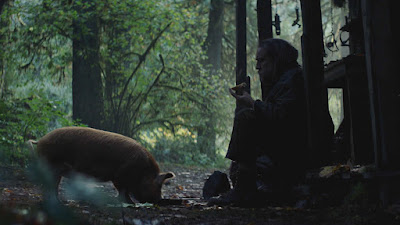 When I reviewed Michael Sarnoski’s electrifying debut feature earlier this year, I noted that Pig is an exercise in constructive vengeance, a roaring rampage of empathy in which former celebrity chef Robin Feld (Nicolas Cage) rectifies the theft of his beloved truffle pig by tracking down her captors and forcing them to interrogate their actions rather than pay for them. Robin’s personal affections aside, the pig herself is largely immaterial — what bothers Robin is the culture that corrupted her value so thoroughly that black market gangsters would be compelled to commit such petty violence. What has changed since Robin’s self-imposed exile? What have we forgotten? “We don’t get a lot to really care about,” he tells a former protege, and far too much time is spent on a performative rat race that dutifully separates artists from their talent as they wade further into a lukewarm pool of mediocrity. In Pig’s chilling climax, Robin disarms a dangerous man with just a poignant memory. Sometimes that’s all it takes: A reminder of what we really care about.

1. The Worst Person in the World (Dir. Joachim Trier) 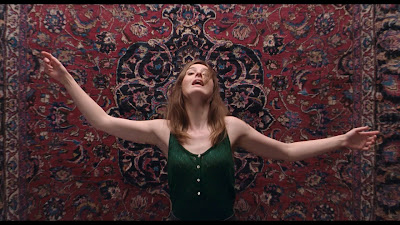 Human beings are storytellers, and the most important stories we tell are our own. We treat graduations, marriages, and career changes like chapters in our personal mythologies, reading from our sacred tomes and sharing amassed wisdom at every opportunity. In our haste to learn, though, we often forget to live. Meet Julie (Renate Reinsve), a bright, restless twenty-something streaking confidently between haircuts, boyfriends, and professional curiosities. Her life is in chapters, too, but they’re unruly: Some are light and breezy, others overwrought and existential. Neat story arcs don’t work for Julie. She is simply energy. Potential. She is a series of confrontations and epiphanies, of commitments and separations. She is messy and horny and insightful and sincere. Joachim Trier invites us along for her ride, an aching and hilarious anti-rom-com that gives us permission to feel our stories out, to embrace uncertainty and resist judging ourselves too harshly. Our lives are not chapters, but rivers that ebb and flow. Julie is going with it. We should, too.
Posted by Patrick Bromley at 5:00 AM