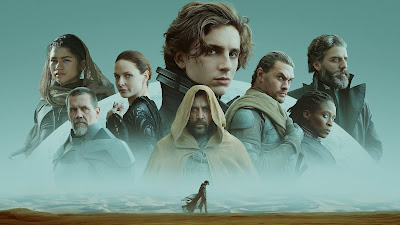 In which Denis Villeneuve crafts half of a masterpiece.

Spoilers for a sixty-year-old novel ahead.

As he prepares for a sparring match with weapons master Gurney Halleck (Josh Brolin), young princeling Paul Atreides (Timothée Chalamet) taps his wrist, activating an energy field meant to protect his body from his opponent’s blade. The shield glows blue until Paul tests his own blade against it, which changes its hue to red. In a wordless instant, director Denis Villeneuve gives his audience all they need to know about the upcoming fight: Blue is good, and red is bad. This is a scene about Paul’s instincts, his rhythms, and the film’s visual language is crafted to match. We do not always have the gift of time, Halleck reminds us. Our enemies will not wait for us to feel comfortable. They will not share their motivations or give us opportunities to counter. Rarely will we know the What or the Why. Rarely will we sign off on the rules of engagement or establish reasonable terms of surrender. Rarely will we know every detail. The attack will come suddenly and without warning, and the heir to noble House Atreides must be ready. 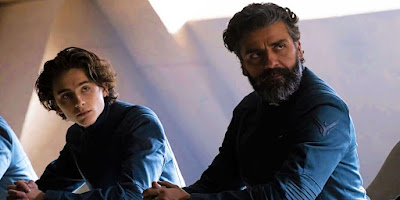 And the attack does come. No sooner does Duke Leto Atreides (Oscar Isaac) settle his family on the desert planet Arrakis than the vicious Baron Vladimir Harkonnen (an almost unrecognizable Stellen Skarsgard) moves to reclaim his former fiefdom, assassinating the Duke and forcing his son and concubine (Rebecca Ferguson as Lady Jessica) to take refuge in an unforgiving desert. It wasn’t meant to be this way, Paul laments as he crosses a barren wasteland. Leto was to be a benevolent ruler on Arrakis, to give the native Fremen a real stake in their planet’s most valuable resource: the spice melange, a mind-altering substance worth billions. After years of Harkonnen exploitation, the Fremen would find just rulers in House Atreides. The cunning Duncan Idaho (Jason Momoa) had made inroads with Fremen leaders like Stilgar (Javier Bardem), assuring them that the Duke is a man of his word. There could have been peace on Arrakis for the first time in generations, if only they’d had the chance.
Sprawling and grand though it may be, Villeneuve’s adaptation of Frank Herbert’s legendary novel is teeming with that sense of interruption and anti-climax. We were just getting to know the charismatic Atreides, just starting to understand the ideology of the Bene Gesserit, the mysterious sect of priestesses guiding Jessica. We had only just learned that the shady Emperor Shaddam IV was in league with the Harkonnen, that he sent his Sardaukar death squads to aid the Baron’s nephew (Dave Bautista as Beast Rabban) in his attack. We’re late to all the palace intrigue and political machinations that makes Game of Thrones so captivating. Like Paul, we feel blindsided. We don’t understand this complicated universe. And that’s Villenueve’s point. Streamlining the exposition that crippled David Lynch’s 1984 adaptation, this Dune — styled Dune: Part I in its opening titles — focuses on the rhythms of its source material rather than its politics. This Dune is murkier, less austere. It’s about mood and tone. It’s about fear. 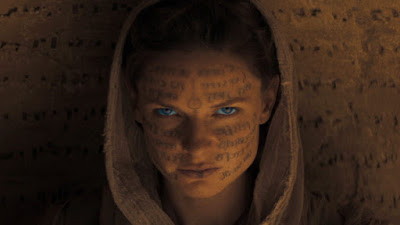 It’s that knack for visual grandeur and character nuance that made Denis Villeneuve the right choice for a new Dune. Herbert’s novel is a baroque science fiction fantasy, an unwieldy sociological allegory best translated through the spectacle of Blade Runner 2049 and the empathy of Arrival. We must feel Paul’s pain without pitying him. We must sense the chaos in his nightmares — visions of a mysterious, blue-eyed woman — without trying to explain them. Timothée Chalamet is the right choice, as well; his callow curls and lanky frame highlight the true depth of his inexperience and make the Fremen’s prophecy — that he is Muad’Dib, their long-awaited messiah — all the more unlikely. Shining, too, is Rebecca Ferguson, who conveys Jessica’s crisis of allegiance with dignity and restraint. She is a mother to her son, but she is also a daughter to the Bene Gesserit, who see Paul as their own messiah, albeit one carefully designed through generations of arranged marriages. Will she have the strength to guide him? 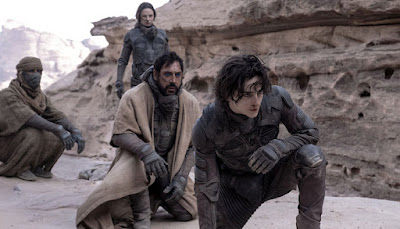 With his virtuoso cast humming in unison, Villeneuve can turn his eye to Dune’s remarkable visual effects and production design, which, combined with Hans Zimmer’s haunting and ethereal score, make for the best purely visceral cinematic experience of the year. Dune is near-punishing in its depth and scale without ever approaching incoherence. We see the weight of the starships and the size of the mighty sandworms. We feel the texture in the Fremen’s stillsuits and the cold oppression of the Harkonnen’s lair. We hear Chani’s (Zandaya) seductive lilt echoing through Paul’s subconscious. Even the bits of Dune that should bore us — those in-between moments of transition or introduction that often stop a narrative cold — are crafted with such detail that there is always something to sweep us up and keep us invested. Most importantly, though, we feel the fear, heartache, and purpose in this first leg of Paul Atreides’ journey. Should Villeneuve get the opportunity to make Part II, it just may be his masterpiece.
Posted by Patrick Bromley at 5:00 AM