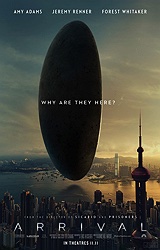 Minor spoilers for Arrival ahead:

The best science fiction compels us to consider the world we know with an alteration or two, to ask “what if?” What if our defense systems became self-aware and turned on us? What if our reality was actually a computer simulation created by blood-sucking robots? What if someone forgot to lock all the dinosaur cages? It was only a matter of time before director Denis Villeneuve (Enemy, Sicario) started asking those questions. His new film Arrival (based on the short “Story of Your Life” by Ted Chiang) is far broader and more ambitious than any of his work to date. In many ways, though, it’s a continuation of themes his fans will be familiar with: authority, social structures, and (pun absolutely intended) alienation. It’s a film about the constructs and connective tissues that make up a civilization on both a macro level (nations, governments) and a micro level (brain chemistry, phonetics). Most importantly, it’s about the way we communicate with each other and the chaos that arises when that communication breaks down. 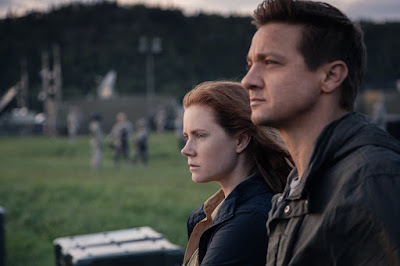 Sometime in the near future, twelve alien ships touch down in various regions around the world. They hover silently upright and bear no visible weaponry or clear plan of attack. Linguistics professor Louise Banks (Amy Adams) and theoretical physicist Ian Donnelly (Jeremy Renner) are recruited by the U.S. military to make meaningful contact with the beings inside the “shell” that hangs above rural Montana. Their goal is to determine what these creatures are, how they got here, and what they intend to do. They join scientists and mathematicians from every world government, each of them using a variety of techniques (everything from binary code to advanced calculus) to establish some kind of dialogue with the alien visitors. Their first breakthrough comes when Louise discovers the squid-like Heptapods’ written language, a series of inky blotches that seem to hold a hidden message. She and the others must decipher that message before itchy trigger fingers around the world start an intergalactic war.

Arrival’s marketing has been largely spoiler-free, but there’s very little about the film to be gleaned from a few minutes of out-of-context footage, anyway; it’s really only comprehensible in the moment. Its visuals are stunning and bizarre: the Heptapods, a mix of H.G. Wells and H.R. Giger, float ominously in a murky fog behind a glass-like barrier. It’s a design that demands willing suspension of disbelief; we’re never going to suss out how their warp drives work or what their toilets look like. They’re more symbolic than anything else, faceless and ethereal. Seeing them isn’t the exciting or interesting part; it’s all about feeling their influence over Louise as the film progresses. At one point, she and Ian discuss the way learning a foreign language can rewire a person’s brain, meaning that the language we speak largely influences the patterns and pathways we use to think and make meaning. The more Louise learns about the Heptapods, the more her (and by extension, our) pathways change. She learns to think multi-directionally (“Imagine trying to write a sentence with two hands, each starting on either end of the page”), which changes our entire perception of the events that have happened and those which are to come. 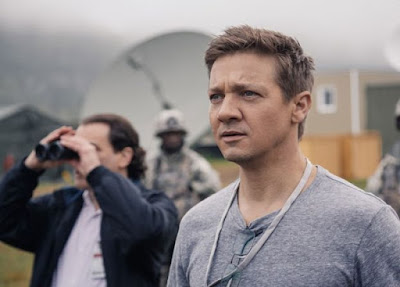 That’s right: Arrival doesn’t just teach its protagonist to Think Different. It also plays with the very nature of cinematic language. Louise learns to write with both hands while we learn to feel time and space in new ways. We learn to reconsider the nature of what we saw before just as the film pivots toward introducing something new. Flashbacks become flash-forwards. Exposition becomes subtext. The very shape of the film changes. While Villeneuve clearly has a ton to say about cooperation, empathy, and the nuances of international diplomacy, the most successful parts of Arrival are in the audience’s experience. It gets us in lockstep with its rhythm so that we can recognize the narrative summersaults and subversions of expectation when they come later on. They don’t all work, but they do build to an epiphany moment that your friends will all lie and say they saw coming. It’s a remarkable achievement in storytelling that we’re going to be unraveling for years to come.

It’s also a stunning audio/visual exercise: Villeneuve and cinematographer Bradford Young create stark lighting contrasts and barriers between characters within the frame that develop the theme of communication in an elegant way. We’re constantly looking at video screens or through glass panels, contrasting an odd sense of claustrophobia with the film’s otherwise sweeping visual landscapes. The shell’s design (as you’ve seen on the poster) is familiar enough that it doesn’t distract and yet unique enough to still be interesting. Villeneuve regular Jóhann Jóhannsson composes the kind of thumping, droning score that seems to be a staple of prestige science fiction, but he manages to walk a blurry line between diagetic and non-diagetic elements that leaves us wondering where one ends and the other begins. It may be trite at this point to say that a film must be seen in a theater, but Arrival is the kind of movie that wants to wash over you. You would do well to see it as big and loud as possible. 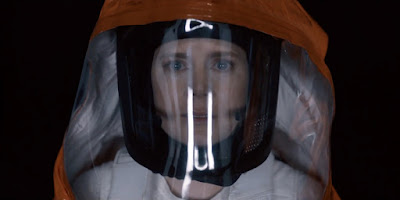 Arrival is likely to draw favorable comparisons to a film like Interstellar, another science fiction epic about the nature of choice and destiny. They share similar problems (not the least of which is an overwrought, plodding ending that feels like a bad studio note), but Arrival’s vision is much clearer and more satisfying. Some will complain that the characters are not fleshed-out enough, that the emotional stakes are underdeveloped. A second viewing might reveal that the film quietly builds its emotional stakes from the first frames; we just weren’t looking for them until they were right in front of us. It’s been said in other places that Arrival could not be a better antidote to the post-apocalyptic political landscape the U.S. currently finds itself trudging though, and that’s true. It is a hopeful film. It is a loving film. It’s about trust and acceptance and understanding. It’s not only one of 2016’s best, but (excuse the hyperbole) one of the most unique and ambitious science fiction films of the 21st Century.
Posted by Patrick Bromley at 5:00 AM