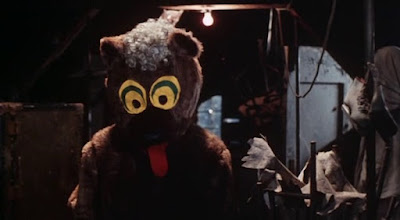 The slasher sub-genre has been talked and written about ad nauseam, from the rebirth of the slasher in the late '90s thanks to Wes Craven and Scream to its most recent, sporadic resurgence beginning with (maybe?) Behind the Mask: The Rise of Leslie Vernon. I, for one, love a good slasher. Even a bad slasher. Halloween is one of my all-time favorite movies. The House on Sorority Row, The Burning, Black Christmas, Pieces, Sleepaway Camp; all great. New slashers like Halloween Kills (I'll be taking no questions at this time), Freaky, The Stylist, You Might Be the Killer, and The Greasy Strangler all do something at least interesting. Again, the list is long. But then there are some slashers that are a beat up, soggy, dilapidated, and overused boxcar of a movie that gets set on the tracks in a busy train yard full decent to great slashers, hoping to just mingle about with the greats and not stand out too much. It just wants to earn a little money. 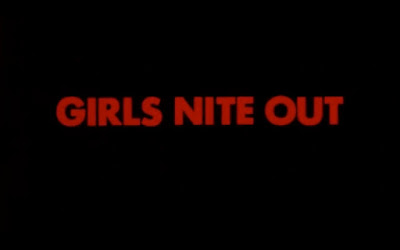 Girls Nite Out is that beat up, soggy, dilapidated, and overused slasher that just wants to sit on the shelf next to the big boys. In a year that gave us horror greats like The Thing, Halloween III, Poltergeist, and Creepshow, we also get a Girls Nite Out. The film opens in an insane asylum where a nurse walks in to find a patient who recently hung himself. We then transport to a college basketball game taking place in a high school gymnasium in front of a YMCA league crowd. Why is it that I can always smell the gym of people and the sweaty boys running up and down the court during basketball games in movies? Is it because Teen Wolf, the sweatiest movie in the world, traumatized me in this way as a child? I think so. The two stars of the team, Pete “Maniac” Krizaniac (worse than “John Smith,” this is the absolute laziest character name in all of cinema) and Teddy Ratliff, are your typical horny college boys, and spending the first entire half of the movie with them you'd think these two characters were the main focus of the plot. Not true! Not true!

Teddy and “Maniac” have an interesting, queer-lite relationship with Revenge of the Nerds' Julia Montgomery as Lynn, Teddy's girlfriend and “Maniac's” really close friend? Sadly, this is the most interesting thing about this movie, and it's not explored in the least. (Because why would it be? Gimme those kills!) The main plot line of the movie is about a scavenger hunt in which all the sororities on campus partake. This scavenger hunt is directed over the radio by a DJ who gives out clues in between spinning hits from Tommy Jane & the Shondells and Lovin' Spoonful (the reason, I assume, this will never make the jump to Blu-ray) and dropping groovy lines like, “Be mellow. Be Happy. Stay high.” (Sir, it's 1982.) There are so many characters introduced in the movie I spent half the time checking IMDb on my phone so I could keep everyone straight and make sure this was a different actor I was watching. The dialogue is embarrassingly horrific: “Oh, Maniac. I really like to watch you make a pass... in basketball.” While the runtime is an inexcusable 96 minutes, the story dumb, and the dialogue laughable, the most incredulous thing about Girls Nite Out is that it features two of the greatest actors to have ever walked this planet: Hal Holbrook and Rutanya Alda! Holbrook plays the campus security guard who might as well be the town mayor, chief of police, university president, and king of England with the amount of sway he has. His daughter was killed years ago by a student who now resides in the asylum from the beginning of the movie (*music intensifies*). Alda, who is now tied for my most-watched actor in 2022, plays a lunch lady? A house mother? A professor? It's never explicitly said why she's there, but she's there. And it all tries to make sense of her presence at the end.

The top review on IMDb for Girls Nite Out comes from a user called Iguanatic who calls the movie “entertaining.” Maybe if I did drugs this would be “entertaining,” or if it was in the 2am slot of an all-nighter it would be “entertaining.” Vinegar Syndrome's Brad Henderson gave the movie five stars on Letterboxd. My friend Jacob Knight of Secret Handshake calls Girls Nite Out an “Anti-logic slasher supreme so weird it's legitimately surprising it's not Canadian.” That I can agree with. Maybe I'm wrong. Maybe it is an entertaining movie. Will I give it another chance? Maybe. After I watch the 3,796 other movies on my Letterboxd watchlist, I will watch Girls Nite Out again. And while I don't want to go out shitting all over the movie, I will say one good thing about it: the killer is dressed in the college's bear mascot costume and has fashioned knives as bear claws, which are then used to dispatch their victims. Entertaining!
Posted by Patrick Bromley at 5:00 AM