I guess I relate to a 62-year-old train robber now.

I remember being at my Grandma Jo's one Friday night for one of our movie nights. I was four years old, and I couldn't tell you the first movie we watched, but I'll never forget thinking during the second movie, “My god. This is such an old person movie.” The movie? Cocoon. And, still having never seen it, I assume it's just as much an “old person movie” now as it was in 1986. But here I am, writing about The Grey Fox, a story about an aging outlaw that doesn't know what to do in his twilight years. And I loved it. Turn on Diagnosis Murder, hand me that box of epsom salt, and cue up Cocoon to watch after our 4pm supper. 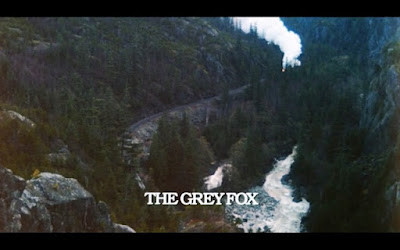 The Grey Fox is the true story of Bill Miner, a stagecoach robber who, after being released from a 20-year prison sentence, made his way up to British Columbia and began robbing trains. Allegedly Miner was the originator of the saying, “Hands up!” His nickname, “Grey Fox, Gentleman Robber,” was so donned because he was always kind to the victims of his crimes. In the film, Miner is portrayed by veteran stuntman and character actor Richard Farnsworth, an actor who so embodies the graciousness of the “Gentleman Bandit” it is impossible to dislike him. At 62 when filming this, his perpetually teary eyes, his calm and quiet demeanor, his smile; they all add up to create the sweetest grandpa a kid could ever hope for.

The film opens with a prologue giving a brief history of the real-life Bill Miner. When we enter the film proper, Miner, small and gray, enters the sunlit courtyard of San Quentin State Prison, and smiles his soul-warming smile, and walks out a free man after 33 years. A brief stint in Portland with his sister and her husband as an oyster picker is followed by Miner's realization that there's only one thing he's good at, and one thing he wants to do. His brother-in-law says to him, “Gettin' a little old to be choosy, ain't ya?” referring to Miner's discontent at his potential career opportunities. “I got ambitions that just won't quit,” Miner says, and it's at that moment that I saw how aligned I was with Bill Miner, Gentleman Bandit. Later, hugging his sister goodbye, Miner says, “Seems like I missed out on all the good opportunities.” Your heart breaks for this man entering the final years of his life. He knows, and we know, that time is short and the breaks are slim. When his first time robbing a train is botched, our hearts break. When The Pinkertons begin their hunt for Miner, our hearts break. When the inevitable happens at the end, our hearts breaks. (Not to spoil anything, but there is a happy ending. Worry not.)

Luckily, though, this isn't a sad movie. While our hearts may be breaking, they're not beyond repair. The film, thanks to Farnsworth, director Phillip Borsos, and co-stars Jackie Burroughs, Ken Pogue, Wayne Robson, and Timothy Webber is sweet and funny and heartwarming. When Miner moves into the small Canadian mining town he sees the life he could have. If he could only have a small sum of money to live out the rest of his days he would be content. When he runs into feminist firecracker Kate Flynn (Burroughs) at the post office, he sees that love is in his future, adding to his dream of a life of contentment; happiness, even. Just one more job, though. With the help of Shorty (Robson), he gets that small sum of money and, after a period of letting the heat die down (see Michael Mann's Heat for the rules of a heist), Miner can begin the last leg of his life in happiness.

Being set in Hallmark movie country, the setting is breathtaking. No other part of the world looks and feels like the Pacific Northwest on film. We're treated to shots of lush greenscapes, dense fog that seems like it will seep out of your screen at any minute, and gorgeous wide shots at the foothills of the Cascades where giant steam engines wind their way around the the mountains. The score by Michael Conway Baker is a composite of traditional Irish folk music and bluegrass of the mountains, transporting us to these small communities where people are just trying to survive. Periodic title cards help move the story along but, unlike almost every movie I've ever seen, I could have lived in The Grey Fox for another hour. At just over 90 minutes, you're sad to say goodbye to Bill Miner because you've come to love him.

My arthritis is starting to act up and the neighbor kids are being too noisy outside, so it's about time I wrap this up. Seldom do we get movies about adults made for adults; even more seldom do we get good ones. Had I seen The Grey Fox as a kid I would've put it into the Cocoon pile of movies that only grandparents watch. But as I get older, even though I'm not quite 40 (almost!), I get it. There's no violence; no big booms; no drugs; no gratuitous nudity; nothing you'd be embarrassed to watch with your mother. There are no super heroes or wizards or computer graphics. The Grey Fox is a movie about adults for adults. And a great one at that. Now excuse me, I have to go watch Matlock.
Posted by Patrick Bromley at 7:49 AM