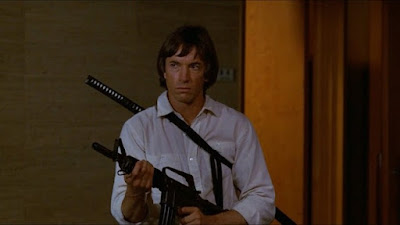 We're all guilty of the “hate watch” or “hate follow.”
We watch bad TV starring people we hate but we binge an entire season in a single weekend. We follow people on social media we absolutely cannot stand but for some reason can't pull the trigger to unfollow because we love to hate them. Obviously this isn't healthy. While I'm getting better at these things, there's one thing I will never surrender: my enjoyment of watching Americans prove how selfish and hateful they are by their actions, and being punished for it. Leave it to John Sayles to write a story about a selfish American who shits all over the beautiful and time-honored traditions of the samurai. And who better to portray that selfish American than Scott Glenn. 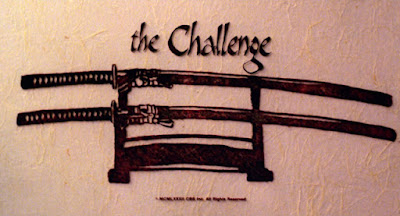 Directed by John Frankenheimer, The Challenge follows Glenn as down-on-his-luck fighter Rick (a hearty American name), who is hired to help transport a sword to Japan. On the way, Rick and the man whom he is escorting are kidnapped and their lives threatened if they don't give up the sword. Rick, agood, selfish American, pleads with the gangster saying he doesn't care who gets sword as long as he gets his money. Rick meets the gangster's boss and listens to the tale of two feuding brothers, each claiming ownership over the sword. One brother has been “modernized” whose life is of the world. The other, played by the coolest of the cool, Toshiro Mifune, runs a convent of sorts, training folks in the way of the samurai. Rick chooses sides, joins the samurais, and a war is waged between the two brothers.

While I love Frankenheimer, and I've enjoyed all the films I've seen of his (Seconds and Dead Bang in particular), his direction in The Challenge left something to be desired. The action sequences especially drove me crazy. The camera was too frantic and the editing too choppy. In a movie combining a Yakuza film with a samurai film, I would have preferred the more patient and smooth camera movements often seen in the latter. Frankenheimer is obviously confident and great at shooting action sequences (Dead Bang, Ronin, etc.), so I was befuddled as to what was going on here. I don't see the steady action-oriented directing hand of Frankenheimer in The Challenge, but it detracts little from what's actually taking place on screen. Thankfully we're also blessed with another magnificent performance from Mifune, here bringing the same quality and showmanship he displayed in his Kurosawa films, as well as the aforementioned Sayles script, and a driving and celestial score by Jerry Goldsmith. 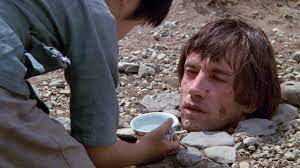 I'm still a little hung up on Glenn in this movie. While I love him (long live Axe) he was quite grating in The Challenge. As the outspoken, swearing, angry, white American he's an absolute Oscar-winner. If that's what rubbed on me like sandpaper then I have no right in saying Scott Glenn was bad in this. But having just recently had a long conversation about John Wayne and how Wayne leaned into that persona as his career went along, becoming a caricature of himself, I get that same feeling with Glenn in The Challenge. During the final confrontation, the “bad” Japanese brother says, “I don't care about honor!” These five words then, in my mind, aligned him (the “bad” guy) with Rick (the “good” guy). The film had been showing Rick struggling and failing at learning the ways of the samurai. At a certain point Rick gives up and resorts to his old American (read: selfish) ways (with an ill-placed and unnecessary sex scene thrown in there for good measure). Never mind the fact that Glenn is sporting an Anton Chigurh-style haircut, Rick is simply not likable.

There are moments the film tries to force us to care about him, though. A little boy at the samurai school takes a liking to the American, who in turn reciprocates those feelings forming a beautiful yet utterly unbelievable bond. And possibly the most well-known scene – Rick commits once again to learning from his sensei and is buried up to his chin for several days without food or drink. Here we have the loudmouthed white man screaming like a lunatic and cursing the members of the school having done this of his own volition. After several days in the burning sun and rainy nights, starving to the point of attempting to eat the beetles crawling near his head, his face beaten and weathered, he's defeated. At no point do I feel sorry for this man. As a matter of fact, I found myself thinking, “You deserve this.” Whether this was the filmmakers' intentions, I couldn't tell. Ultimately we're rooting for Mifune. And during the final fight, samurai Toshiro Mifune teams up with sub machine gun-toting Scott Glenn and all seems right in the world. I suppose that's all that matters. 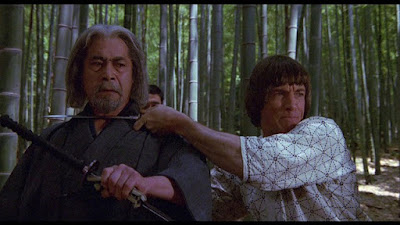 The Challenge is about family traditions – what's important, what's not. We're at a crucial day and age where younger generations don't put much clout into family traditions and “how things have always been done.” With that in mind we can easily side with the “bad brother” in the film. We don't agree to the lengths he goes to achieve what he wants, but we can't blame him for walking away from the way it always was. We also don't walk away from Toshiro Mifune. Ever.
Posted by Patrick Bromley at 5:00 AM